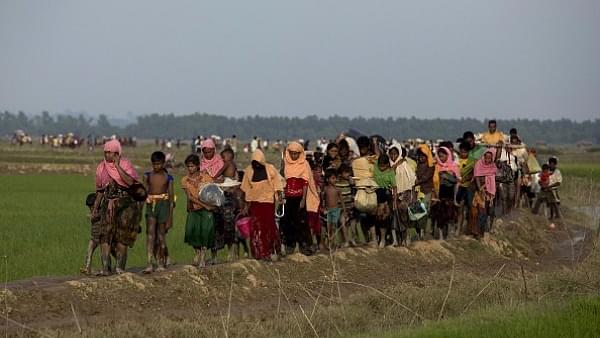 Displaced Rohingya refugees from Rakhine state in Myanmar carry their belongings as they flee violence, near the border between Bangladesh and Myanmar (K M ASAD/AFP/Getty Images)

What is it that is not sounding quite right about the Rohingya refugee crisis? That thing we’re not quite able to put our finger on?

Ah! There it is. The reason for it!

Why on earth has the Myanmar army led by Nobel peace prize hero, Aung San Suu Kyi, suddenly begun picking on this innocent folk called the Rohingya, who have just been going about their business all these decades?

Perhaps it’s because they haven’t merely been going about their business.

A violent Islamist group called the Arakan Rohingya Salvation Army (ARSA) is forcing all Rohingya males – even very young boys – to attack Rakhine Buddhists and other civilians and to provoke the Myanmar army into violence. This group has been getting its funding and weapons from Islamic countries like Pakistan and Malaysia and its training from al-Qaeda and Taliban in Afghanistan.

(Note: Western liberals, the mainstream media and the Saudi-backed United Nations (UN) have not bothered to call out the human rights violations perpetrated by ARSA against the Rakhine civilians, as well as against the Rohingya who were being forced to commit acts of terror.)

The other aspect that is gnawing at this writer is the dearth of material evidence that Myanmar’s army is, in fact, persecuting the Rohingya Muslims as monstrously as the latter and the UN claim.

In June 2015, it was discovered that many of the horrifying videos and images of the Rohingya massacre being circulated on social media and major news outlets were of other disasters – the devastating earthquake in China, violent Tibetan activism in India, the terrorism of the Liberation Tigers of Tamil Eelam in Sri Lanka, and even an oil tanker on fire in the Congo. However, let us give the Rohingya the benefit of the doubt and assume that they have not, in fact, torched their own homes for international attention, as the Myanmar government is claiming (though this writer would not put arson-jihad past ARSA).

Take Maungdaw, for instance, where the Myanmar army last week burnt down the homes of innocent Rohingya. Precisely a week prior to this incident, ARSA had attacked soldiers and Rakhine civilians in the area, who then had to flee their homes and hide in a monastery in Taung Bazaar. The victims in this scenario are clearly all the non-ARSA parties – all the Rohingya and the local Rakhines not engaging in jihadi violence.

Yet, this still begs the question – why the Rohingya? Why are they – the Muslims of Bangladeshi origin – the only community in a nation where over a hundred different ethnic groups of various religions coexist peacefully, being targeted?

The answer lies in the demystified history of the Rohingya. Since the 1940s (even before Saudi oil money, al-Qaeda training, etc), many Rohingya Muslims tried to wage “jihad” against Myanmar (burning Rakhine villages and massacring Buddhists for decades) and upon realising that they’d lost their bid for an Islamic nation, they have been, since the 1990s, trying to gain citizenship.

Fed up and in no mood to reward this community for its sedition with citizenship, Myanmar has taken a good look at its neighbours, Malaysia and Indonesia – where Buddhism is waning, Islamism is increasing, and homosexuals and women are being caned in public, and has simply decided to expel all Rohingya Muslims from its country before the same fate hits home.

Nevertheless, there are thousands of Rohingya who are simply innocent victims – collateral damage, so to speak – in this conflict. In spite of the community’s checkered history, the non-violent Rohingya deserve to be treated differently and separately from ARSA. They deserve the protection and citizenship of a nation – that is their human right. Historically, the Rohingya were brought as slaves from Bangladesh to Burma by the British. Why doesn’t the United Kingdom take them in and give them refugee status or citizenship? The Rohingya have more in common with the Bangladeshis in terms of religious and cultural identity and, moreover, they share the same ethnicity. What’s holding Bangladesh back? Turkey’s Erdoğan is even willing to cover the costs for Bangladesh taking in these refugees.

The fact is, these countries know only too well what Myanmar already knows – that certain organisations are secretly encouraging and spreading Islamist ideologies among the Rohingya and will not cease to do so. Suu Kyi has explicitly stated that international organisations have been complicit in aiding Rohingya militants. But she has been pooh-poohed by Zeid bin Ra’ad al-Hussein from Saudi Arabia and the UN High Commissioner for Human Rights (which is ironical, like Saudi Arabia’s elevation to the UN Women’s Rights Commission; it’s his word against Suu Kyi’s, and the world has chosen to ignore hers).

Reports of rapes committed by the Myanmar army against the Rohingya have their sources in the Office of the UN High Commissioner for Human Rights. Some reports have come from Al Jazeera; that requires no further explanation.

In the meantime, Saudi Arabia is busy bombing Yemen into oblivion and starving millions of Yemeni children to death, all the while singling out Israel and Myanmar for human rights violations.

Why is this writer finding it hard to view the Rohingya crisis as real and not a hoax?

Also Read: Ohio Attacker Was Wrong, Rohingyas Too Have A Bloody History To Answer For

Sanjeevani Rao is a millennial working in a housing company. She is a BA in Economics from the University of Chicago and an MSc in City Design from the London School of Economics.