With Imran Khan As The New ‘Chosen One’ For Pakistan Army, Sharif’s Position Was Always In Danger 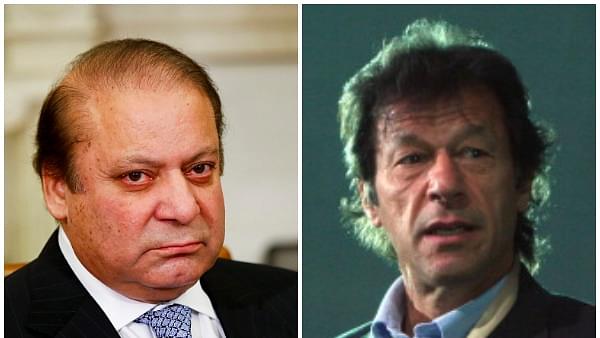 On 10 July, the Joint Investigation Committee (JIT) probing Prime Minister Nawaz Sharif and his family for corruption in Panama Papers case submitted its report to the Supreme Court in Pakistan. The report has accused the Sharifs of financial impropriety. The Prime Minister is under pressure to resign from the largely ceremonial post he holds. While Nawaz Sharif has himself to blame for getting into this JIT soup, it couldn’t have been any other way considering his 'mischievous' attempts at influencing Pakistan`s foreign policy vis-a-vis India.

After the 1999 coup, when the present prime minister was jailed by the then Army chief general Pervez Musharraf, Sharif has been guilty of trying to change Army`s mind on the state of affairs in Pakistan. Sharif’s party, the Pakistan Muslim League (PML), has gotten into cahoots with the Pakistan People's Party (PPP) to try to act against Army`s stranglehold on politics in Pakistan. With both the major parties ganging up against the Army, it was only a matter of time before the generals struck back.

A coup has been out of question for the corps commanders considering the negative fallout it may incur from abroad, particularly America. The Army was forced to sit back and watch as Sharif tried to wrest control of foreign policy. Sharif`s attempts to convince the generals that Pakistan would be better off normalising relations with India, a country six times its geographical size, was rife with dangers. Unable to directly control the government, the Army reacted by upping the ante against India and building a popular narrative against both New Delhi, and indirectly against PML.

Tehreek-i-Taliban (TTP) spokesperson Ehsanullah Ehsan and Kulbhushan Jadhav fell victims to this larger tussle between Sharif and the Army. Both were arrested and videos of their `confessions` admitting India`s `role` were made public by the military. According to the confessional videos, India is behind all security problems in Pakistan and has been actively conniving with every anti-Pakistani entity in the region. It therefore made sense for Pakistan to continue countering India through the tried and tested method of using jihadis. It is ridiculous to even think that India would consort with Islamic terrorists of TTP, but Pakistani public has been fed an anti-India diet for so long that it would consume anything similar, even if it made no sense whatsoever. The release of these videos was to counter the narrative gaining ground in Pakistan which correctly blamed its use of Jihadi elements in Afghanistan and Kashmir to its internal security problems.

A Dawn newspaper leak, according to which the civilian leadership in Pakistan had asked the military to act against jihadis in Pakistan, was the last straw for the Army. Not only was it being asked to reverse its policy of using proxies in India and Afghanistan but also being `ordered` by the civilian government now. The reaction of the generals was on expected lines. It pushed the government to act against people responsible for the leak. Although the government complied by sacking government officials and hounding the responsible journalist, the Army remained unimpressed. The fallout was often reflected publically in the statements of the media wing of the army, the Inter-Services Public Relations (ISPR).

heSo where does the JIT figure in all this?

The Panama Papers case first came to light in 2015. It gave ammunition to the opposition parties in Pakistan to corner Sharif and his party. But in the light of developments in Pakistan since last 10 years, both PPP and PML are seen as lost cause by the generals. The only alternative left for them, as far as democratic politics goes, is to support Imran Khan. The cricketer-turned-politician himself has not made much headway in politics since his plunge in 1996. After 20 years of failure in dislodging the dominant parties in Pakistan, he is willing to join hands with the generals too. It was Khan, who filed a complaint in the Supreme Court against Sharif alleging corruption in November 2016. As the court proceedings carried on, Qamar Bajwa, the army chief met Khan on 31 March 31 2017. On 20 April, the Supreme Court in its order stated that there was insufficient evidence to oust Sharif as prime minister and decided to constitute a Joint Investigation Committee to further probe the matter.

The JIT formed in Pakistan was similar to the one ordered by Prime Minister Narendra Modi in India after the Panama Papers scandal broke out. There was one major difference though. In New Delhi, the committee constituted of four civilian members, while in Pakistan it had six members. The extra two members were from the Army. The Military Intelligence (MI) and Inter-Services Intelligence (ISI) had one representative each. Needless to say, there is absolutely no logic in having MI and ISI members in a case related to financial impropriety. But then Pakistan is no ordinary state. Whether the judges called the generals or the generals called the judges is irrelevant, but the JIT`s report was already decided when it was constituted.

An entertaining two months of the JIT`s functioning saw Sharif shown his place in the corridors of power in Pakistan. All the members of his family were summoned by JIT and made to wait for hours before their deposition. An image of Sharif`s son, Hussain Nawaz waiting like a criminal in a room went viral in June.

After the report of the JIT was submitted on 10 June, Sharif has been acting brave and defiant. He has called the JIT report `slander` and refused to resign, despite the media clamouring for it. Sharif himself was allegedly the beneficiary of underground activities of Army Intelligence, when the generals decided to pump money to oppose Benazir Bhutto in the 1990 election. If the Army`s patronage has now passed on to Imran Khan, Sharif could hardly complain.

So what has the latest Islamabad Circus got to do with India? Apart from providing entertainment, nothing. Sharif was never close to real power in Pakistan. In fact, he never ever got a whiff. Power in Pakistan rests with generals and is likely to remain that way in the near future. The hostility to India will continue and policies `countering` India will remain in place, even if they damage Pakistan itself. The generals will likely seek more diplomatic support from China as the West continues to put pressure on Islamabad for action against terrorists. So, we will see even more dependence of Islamabad on China.

India would do well to focus on its own economic development while keeping a close eye on the Sino-Pakistani axis. It should also continue to name and shame Pakistan`s support for terrorist activities in the region. China`s defence of Pakistan and its terrorist jihadi friends will drag Beijing through mud too. Finally, India should maintain a robust counter-terrorism policy in place, keeping Pakistani proxies in mind.

We should remember that the raison d'être of Pakistani Army is India. The generals would rather destroy Pakistan than allow civilian leadership to change its policy towards us. The civvies may be realising the futility of this policy as India pulls away from a self-destructing Pakistan. But the misery of the Pakistani population has not started pinching the corps commanders as yet. They neither have to suffer long power cuts nor enjoy the company of unwashed masses. They would be happy to fight India till the last Pakistani starts eating grass, literally.

India should prepare itself for the long haul rather than hope for any change in policy from civil leadership in Pakistan, be it Sharif, Imran Khan, Asif Ali Zardari or anyone else. Even if someday the civvies do manage to beat the generals in politics, we ought to remember that the Army always has the guns.