Taking On Beef Mafia: How Three Dalit Men Were Falsely Accused Of Rape Attempt For Tipping Off Police About Illegal Cow Slaughter 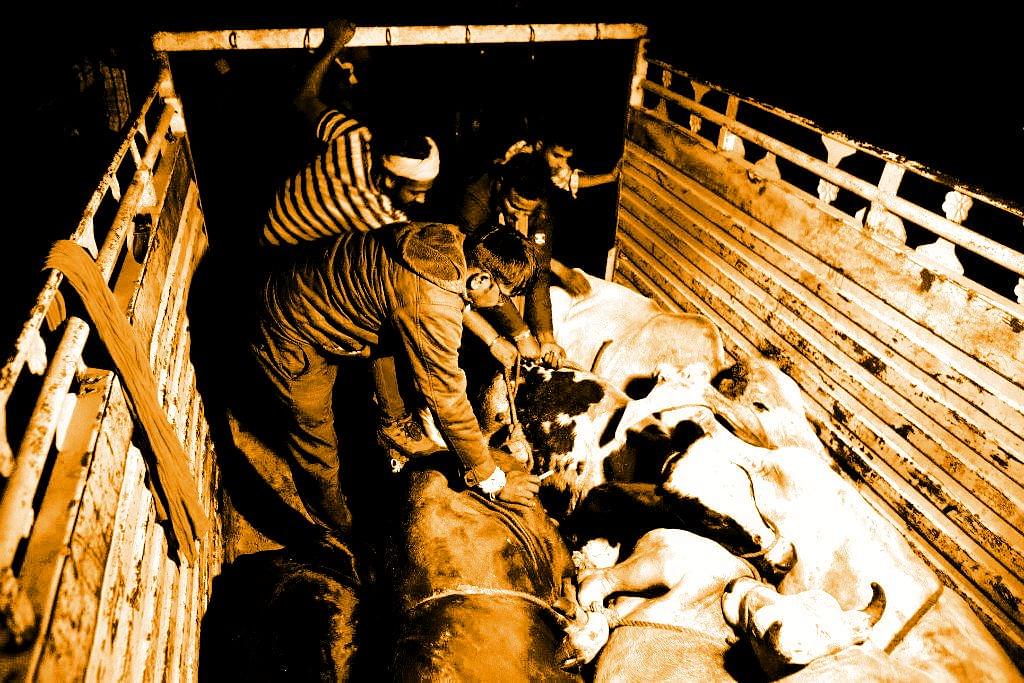 This correspondent has been reporting extensively on cattle thefts and and their illegal slaughter, and how taking on the beef mafia is mighty tough for the police, let alone common residents.

Last year, a judge at the Punjab and Haryana high court made some sharp observations on the nature of the criminals involved in it,

“…the offences are being committed by hardcore smugglers, fully trained and that too in a well planned manner on large scale in an organized way. The affidavit also reveals that whenever the police tried to apprehend the accused or make efforts for intercepting or stopping the vehicles carrying smuggled cows for slaughtering, then accused persons attacked them not only with stones, but there are instances of using illegal firearms/weapons and such incidents are frequent in District Nuh.”

In subsequent hearings, a court-appointed Amicus Curiae, advocate Deepak Balyan, noted this about the modus operandi of such criminals:

“The Mewat area in Haryana, which is inhabited by minority community Mews and the bordering areas of Rajasthan and Uttar Pradesh, such as Mathura, Alwar and Bharatpur, is a paradise for beef traders. Here mass killings of cows takes place illegally and openly in small villages, mostly in areas between 2 hills or sometimes even in the houses in the villages…”

While these observations were made in a case of illegal cow slaughter in Nuh district of Haryana, they stand true for such crimes across the country.

Perhaps it is the beastly nature of the beef trade that people involved in it react most violently when opposed. Two years ago, in Uttar Pradesh’s Auraiya district, butchers slit the tongues and throats of three sadhus after they tipped off police about illegal cow slaughter activities near a temple. Cattle smugglers are also known to routinely kill dairy farmers when they try to save their cattle from thefts. Animal activists and journalists have been beaten up by such criminals during raids.

Now, we tell you a story of how three whistleblowers in Bihar, incidentally from the Dalit community, were falsely accused of rape attempt for helping the police raid an illegal cow slaughter unit. After a month, however, the police declared them innocent based on an investigation.

Troubles for them began on 12 June, when the police carried out the raid.

Vinod told Swarajya over the phone that he first complained against the meat unit in October 2019.

“There is an area in our village where cow slaughter happens openly. In October, some of us residents gave a written complaint at the local Khudabandpur police station. The cops heard us, talked to us, but did not do anything,” he says.

“In January, five of us travelled all the way to New Delhi to give a written complaint to Giriraj Singh [member of parliament from Begusarai]. Again, nothing happened. We also learnt that the meat unit has the backing of a BJP minority cell member, one Sikander Alam.”

Paswan says that after months of complaining in vain, the group came in touch with activists associated with the local unit of Vishwa Hindu Parishad (VHP). They together put pressure on the police, and a raid was finally carried out around 4 am on 12 June. About eleven cows were rescued and tools for slaughter recovered, says Paswan.

“Before the raid, the police officers told us that they can’t do this without our help. They told us we would have to be present at the spot, just in case. And we did,” he says.

The same day, Vinod, along with Sonu and Shivnandan, was booked in a rape attempt case by men allegedly involved in illegal cow slaughter.

The first was by Vinod who alleged that six people involved in illegal meat trade thrashed him after the raid. The second was by the wife of one of six accused in the first FIR, accusing Vinod of attempting to rape her.

The statement by Vinod recorded in FIR number 107/2020 says that after the police carried out a raid acting on his tip-off, six people involved in illegal meat trade waylaid him on a street and dragged him inside a house. They snatched his mobile phone and stole Rs 4,000 cash kept in his pocket.

The statement further says that Azad dragged his wife Ghazala to the spot and forcibly recorded a video of Paswan with her in a way that looked like molestation.

The statement of Azad’s wife Ghazala recorded in FIR number 108/2020 says that around 5 am, Vinod entered her house and tried to rape her. When Azad appeared on the scene, he saw Vinod, along with Sonu and Shivnandan, trying to rape her. Azad tried to record a video for proof, but Vinod beat him up and threatened to shoot him dead, the statement says.

After a month, however, the three men were declared innocent by the police after an investigation.

A letter submitted in court on 27 July by the police chief of Manjhaul division, Vibha Kumari, gives statements of two eyewitnesses who dismiss the allegations by Ghazala. The statements say that it was Azad who dragged his wife towards the three Paswan men and Ghazala who put the men’s hands on her chest. Azad recorded a misleading video and circulated it.

Vinod told Swarajya that he is expecting the court to acquit him and the two other men in the case soon. He says the experience has left him traumatised.

Vinod comes from a family of army men. Both his father and grandfather, he says, have been in the Indian Army. Vinod however runs a coaching institute. The incident, he says, brought him some disrepute even though “most villagers knew the truth”.

Shubham Bhardwaj, a VHP functionary in Bihar, told Swarajya that whistleblowers who complain about illegal beef trade must get protection from the state.

“While we are glad that the police were fair in their investigation in this case, the fact remains that taking on the beef mafia means inviting a lot of trouble for yourself, even a threat to life,” he says.

(Readers may also read about an earlier case reported by this correspondent from Bihar where a family, incidentally Muslim, was thrashed by their neighbours, who were involved in illegal cow slaughter, for complaining to the police about it. The meat unit was eventually sealed after a raid following sustained pressure put by this correspondent through reporting. Read the reports here and here.)