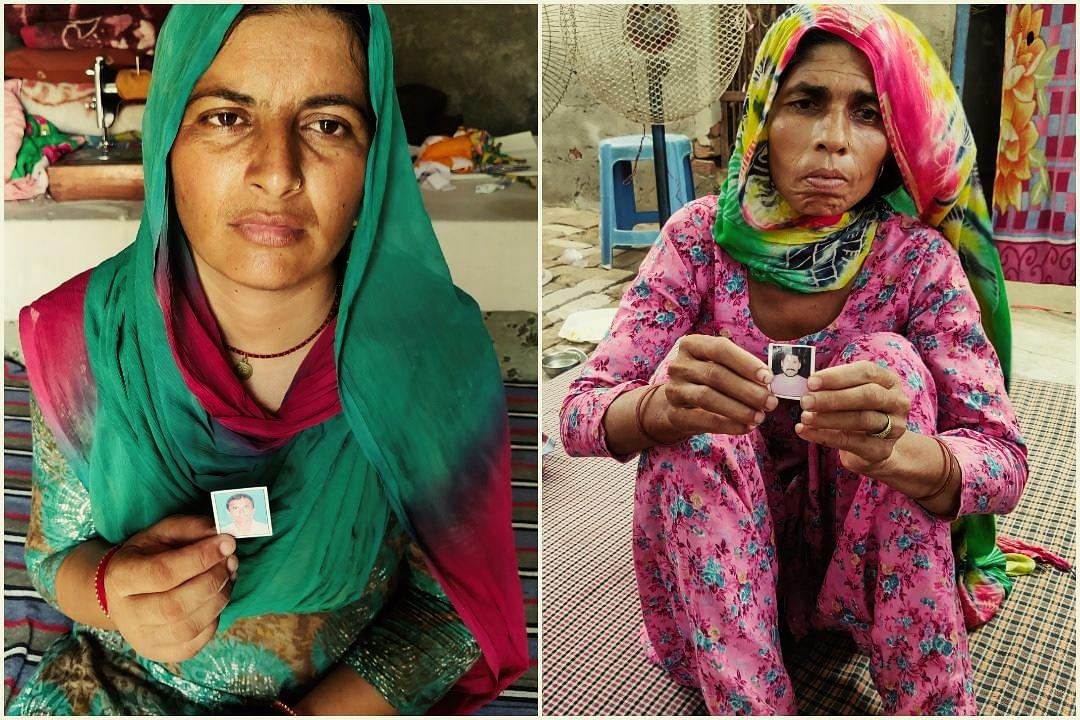 (We had two buffaloes and a calf. We lost life as well as property. We are left with nothing)”

This is all that Surinder Saini says when asked about the intervening night of 20 and 21 July. Cattle thieves had entered his brother’s farm, hacked him to death and looted his cattle. The 46-year-old victim, Naresh Saini, is survived by his wife and six children.

“His face was completely disfigured by the multiple stabs. It looks like a gandasi [axe] was used,” says Satbir Saini, a cousin of Naresh recalling the gruesome killing.

Naresh was a labourer in the farm owned by one Ashwini Jawa from village Barwala in Haryana’s Hisar district. Naresh too was a resident of Barwala. He would often sleep at the farm located on Daulatpur Road, hardly a kilometre away.

The poor family was heavily dependent on sole-earner Naresh, as well as on their cattle. A relative sitting beside an inconsolable Ramwati, Naresh’s wife, said the couple had planned to sell the buffaloes to a dairy farmer for the wedding of their eldest daughter. “They bought the animals as one-year-old calves and raised them. Just when they could be useful, they are taken,” the relative said. Pointing to Ramwati, she added, “she is completely broke”.

The family belongs to a backward caste.

A week on, the police have found no clue of the killers. Barwala police station registered a case against unknown men under IPC section 460 (house-trespass punishable where death or injury is caused).

Jagbir Singh and Ranjit Singh own a farm adjoining the one where Naresh Saini worked. The area is full of patches of agricultural fields dotted by rooms for farmers to rest. The men said they are shocked and scared for their lives. “Farmers can’t afford to sleep inside locked houses with their families. They have to guard their fields,” said Jagbir. “We don’t even know what precautions to take.”

Both said they did not suspect anyone for Naresh’s death.

Cattle thefts are common in the area, say residents. Loss of cattle is often a major setback that leaves the victim families in distress for a long time. Loss of an earning member, of course, sends them on a downward spiral of permanent deprivation.

It’s been more than a year since cattle thieves killed 32-year-old Inderpal Bishnoi in the neighbouring Sahu village. His family, comprising his mother, wife and two children, has fallen on hard times.

At that time, the entire village gathered at the bus stand and staged a day-long protest, forcing the district magistrate and senior police officers to visit. The protesters were agitated; the murder was preceded by a spate of cattle thefts and the police, as per villagers, had done nothing about it. The officials made several promises to the family — of compensation, government job to a member, housing under government scheme and even a gun licence.

When this correspondent visited the family on Wednesday (24 July), they said they got nothing.

Inderpal’s 27-year-old wife Kiranbala said she never got the government job that was promised. An official did help her find work at a government office, but it is for cleaning the premises and pays little. She said she is a daily wage worker and her income just not enough to sustain her two kids.

The family’s responsibility has fallen on Inderpal’s elder brother Hetram, who said he barely manages any saving now. Inderpal’s mother Savitri complained that the DM promised them Rs 3 lakh as victim compensation, but they did not get a penny. The village sarpanch, Rajneesh Godhara, said he has written to the DM several times but to no avail.

Recalling the incident that devastated the family, Savitri said her son and his wife were sleeping in the room next to the gate when some noise outside woke them up. The dogs were barking.

“It was around 3 am. My daughter-in-law looked out and informed that some men were taking away cattle. My son picked up a lathi and rushed out. He did even know that the vehicle was carrying one of our buffaloes too. He caught hold of a thief. But soon, a shot was fired,” she said.

Savitri said she dashed out hearing the gunshot and heard someone moan. “I asked who was it. They said it’s your son who has been shot,” she said.

The victim was taken to a private health centre and then to Hisar district hospital. Around 6 am, Inderpal died of the wounds.

The villagers brought the body, blocked the road outside the bus stand and declared that it wouldn’t be cremated until the officials showed up.

The thieves had escaped after killing. They managed to take two buffaloes from the village but threw Inderpal’s buffalo out. Or probably it fell on its own. In any case, it sustained several fractures and was rendered useless for the family. “We had bought it just a day before for Rs 70,000,” said Savitri. “We lost both our property and our man.”

The family’s cattle shed located right across the house once had five buffaloes but is now empty. “We had to gradually sell them all. We can’t afford any more animals,” said Savitri.

She has not followed up on the case. All she knows is that there were “four-five Muslim men” and they were arrested.

An officer at Uklana police station shows the first information report (FIR) filed on 27 December 2017, and details of the case diary.

Five men named Farman, Faizan, Ehsaan, Afzal and Usman — all from Uttar Pradesh — were arrested and continue to be behind bars. A look at the details show the police have made a strong case against them. The men were initially booked for 307 (attempt to murder), 34 (common intention), 380 (theft), 382 (theft after preparation made for causing death), 420 (cheating, as the thieves’ vehicles was stolen and did not have a number plate) and 25 (fraud). The police later added 302 (murder), 392 (robbery), 397, (dacoity, with attempt to cause death or grievous hurt), 458 (lurking house-trespass), 459 (grievous hurt caused while committing lurking house-trespass), 120 B (criminal conspiracy), among other charges.

The officer said the thieves were taking the animals for slaughter.

Cattle smuggling gangs are rampant in Haryana, Uttar Pradesh and Rajasthan. The thieves are known to do recce in the day and return in the night with pick-up vans, locally called chhota haathi. They target stray cattle as well as the cows and buffaloes tied outside houses and in cattle sheds. They come armed with pistols and axes, threaten the farmers if seen and, if needed, kill them.

These are cases where men lose their lives and, families their sole bread-earners for one major ‘sin’ — owning cattle.

The deadly smuggling gangs prey on farmers’ property to feed the illegal slaughter industry, that eventually supplies regular meat to eateries at cheap rates — between Rs 120 and Rs 150 for a kilo, as per trade insiders. Incidentally, this smuggling is the mechanism that makes beef a ‘cheap source of protein’.

The irony is that if farmers protest against this unbridled crime, it attracts, sometimes, even more trouble. Often, reactions by panic-stricken farmers against thieves get labelled as hate crime and enters spurious databases like IndiaSpend’s. This results in neglect of crime cases when perpetrators are suspected to be from minority community.

Sunil Kumar, 29, who lives opposite Inderpal and witnessed his death, said that Sahu village alone saw at least 15 cases of cattle thefts within two years prior to the murder. He said he is not aware of any case that got solved. “Police ask the owners for evidence of theft. It’s ridiculous,” he said.

Villagers say that Inderpal’s death changed nothing either. “The police did make some rounds for a few nights, but eventually we had to take matter in our own hands,” said Lajpat Singh, another neighbour. He said a panchayat was called and it was decided that seven-eight men would stay awake all night and keep a vigil in the streets. This practice, they say, continued for about six months until there was a complete stop on the thefts.

“It wasn’t easy. So many of us had to sacrifice our sleep and risk our lives,” said Sunil.

The murder of Naresh just 10 kilometres away has again unnerved them. Joginder Kumar, a villager, said the vigils could begin again.

It has also left them angry. The farmers complain of state’s indifference to their plight and talk bitterly of “pampering of cattle thieves”.

Satbir vaguely remembers how Haryana Chief Minister Manohar Lal Khattar gave financial assistance of Rs 5 lakh to the family of Rakbar Khan last year in July. The announcement was made within days of Khan’s death. Khan, a chargesheeted cattle smuggler who had been booked twice for the same crime, was beaten by villagers in Rajasthan’s Alwar district when caught smuggling cows in the night. Khan died later in police custody; several villagers, including the owner of the field through which the cows were being dragged, were arrested and charged for “lynching” of Khan.

Satbir rued that no government representative has visited their family yet. “Had the victim been a cattle thief, they would have certainly come,” he said.