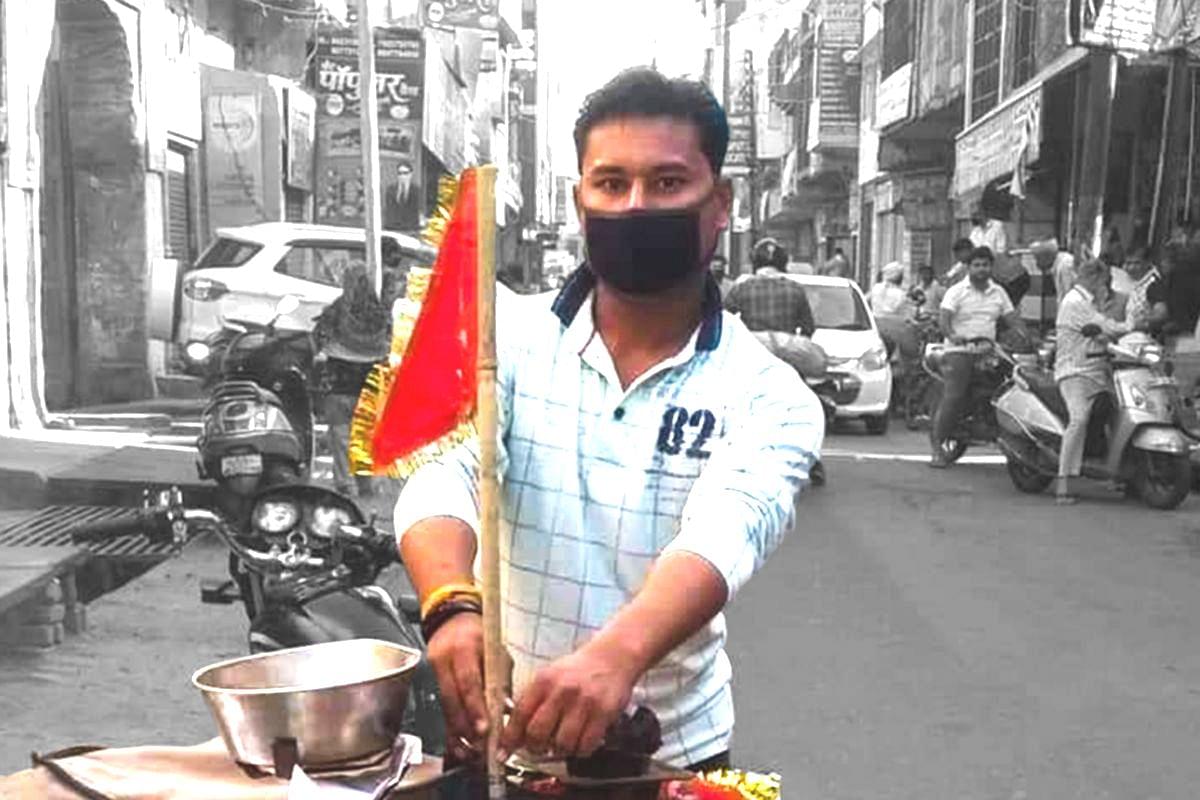 A fruit seller with a saffron flag on his cart. (Twitter)

Last week, the media reported several cases of fruit and vegetable sellers installing saffron flags on their carts or marking their shops with banners saying ‘Hindu’. Such reports have emerged from Telangana, Jharkhand and Bihar.

All three places saw overzealous police intervene to remove the flags and banners and even slap criminal charges on sellers as well as people providing the flags. In at least one case, the local administration justified its action citing “Ganga-jamuni culture”.

“Ours is a Ganga-Jumana culture. We cannot allow such things to happen in the society and let them destroy communal harmony,” a block development officer in Nalanda, Rajeev Ranjan, told a newspaper as his reason for lodging a formal complaint with the police against the saffron flags.

Going by this argument, it would seem that the sellers are marking their shops as Hindus as a communal gesture. Conversations with the sellers, however, reveal a very different reality.

Toona Mahto is a fruit and vegetable vendor in Bihar’s Begusarai district. A video of him narrating the harassment he faced in a Muslim locality for a saffron flag installed on his cart, recently went viral on social media.

In the video, Toona says that as he entered the locality, residents surrounded him asking what it was that he wanted to prove through the saffron flag. The questioning soon turned into harassment and Toona was forced to turn his cart and leave.

In the video, Toona says that he had installed the flag as he was tired of showing his identity card to customers.

This statement is very revealing.

Customers are avoiding buying from Muslim vendors, and are checking the religious identity of the sellers before making the purchases, Toona told this correspondent over the phone.

He said that sensing the customers’ mood, he had begun to carry his Aadhaar card to work much before using the flags. It was when he saw the saffron flags come up on other carts, that he got one for himself.

“Unlike Aadhaar card, saffron flag is visible from a distance. It was obvious that I would lose out on sales if I did not follow the practice,” said Toona, who belongs to a backward caste and has a hand-to-mouth existence.

A similar account is provided by Dheeraj Kumar, a Bajrang Dal volunteer in Bihar’s Nalanda district, who was recently booked by the Laheri police for allegedly installing saffron flags at Hindu-owned shops.

In a move that was widely criticised on social media, the police slapped charges of hurting religious sentiments, creating enmity between groups and even rioting on Dheeraj and a few other men.

Dheeraj, however, refutes even the allegation that he was installing the flags. He says it was the shop-owners and vendors who had asked him for saffron flags as customers are choosing to not buy from a particular community. The sellers installed the flags on their shops and carts themselves, Dheeraj says.

Dheeraj, a Dalit, said so in a 28 April letter to the National Commission for Scheduled Castes, in which he accused the administration and police of caste-based harassment.

“I had a large number of flags left from the Ramanavami festivities, which we gave to the sellers. They installed them out of their choice,” Dheeraj’s letter says.

The practice of installing religious symbols on commercial establishments, after all, is neither new nor limited to the Hindus. Go to any highway or any village or any city, green Islamic flags on shops and hoardings of ‘Muslim hotel’ and ‘Muslim dhaba’ are a routine sight.

Conversations reveal and reports show that it is the fear of contracting the novel Coronavirus that is making customers wary of the community. A major reason for this, it emerges, is the large number of cases where the community members have been reported to be spitting at healthcare officials, residents and in public, and at fruits and vegetables they sell.

Here are a few such reports:

Amid lockdown, members of the community have posted videos of them rubbing currency notes on their nose and mouth, mocking the physical-distancing and other measures to combat the pandemic, and wishing deaths on Indians due to the virus.

“They are spreading Corona. It’s a conspiracy to kill us kaafirs,” a resident of Nalanda told this correspondent over the phone, when asked why she was avoiding buying from the community. Asked why she thought so, she cited reports published in local newspapers.

It is pertinent to mention that a Tablighi Jamaat meeting in Nalanda in mid-March, with participation of over 600 people, had set off panic in the area after local administration informed higher-up authorities about it in April.

On social media too, people are posting similar appeals citing safety of health. There have been reports from New Delhi and Haryana where locals asked Muslim vendors to not sell in their colony and even thrashed a Muslim vendor on suspicion that he was spreading the virus.

The media and commentators would, predictably, blame the public sentiment on ‘Islamophobia’. True, avoiding Muslims is neither right nor justified and, in some cases, it could even be because of prejudice against Muslims, but to broad-brush the public mood as ‘Islamophobia’ is a lazy and ill-informed reading of the ground situation.

In a recent piece published on Swarajya, author Yaajnaseni argued that Indians avoiding physical contacts with Muslims amid the pandemic isn’t out of ‘Islamophobia’, but is a way of survival.

“For a family living in a remote village, one infection episode can push the entire family into extreme poverty…Their best bet is to avoid, as much as possible, the sources of infections in the community as a whole, not one family on its own…When they see before their eyes how policemen are being attacked for not letting people congregate in mosques, healthcare workers are attacked, they know how deep the kafir-hatred runs.”