Indic Chat With Ashay Naik On The Powerful Lessons From Pancatantra 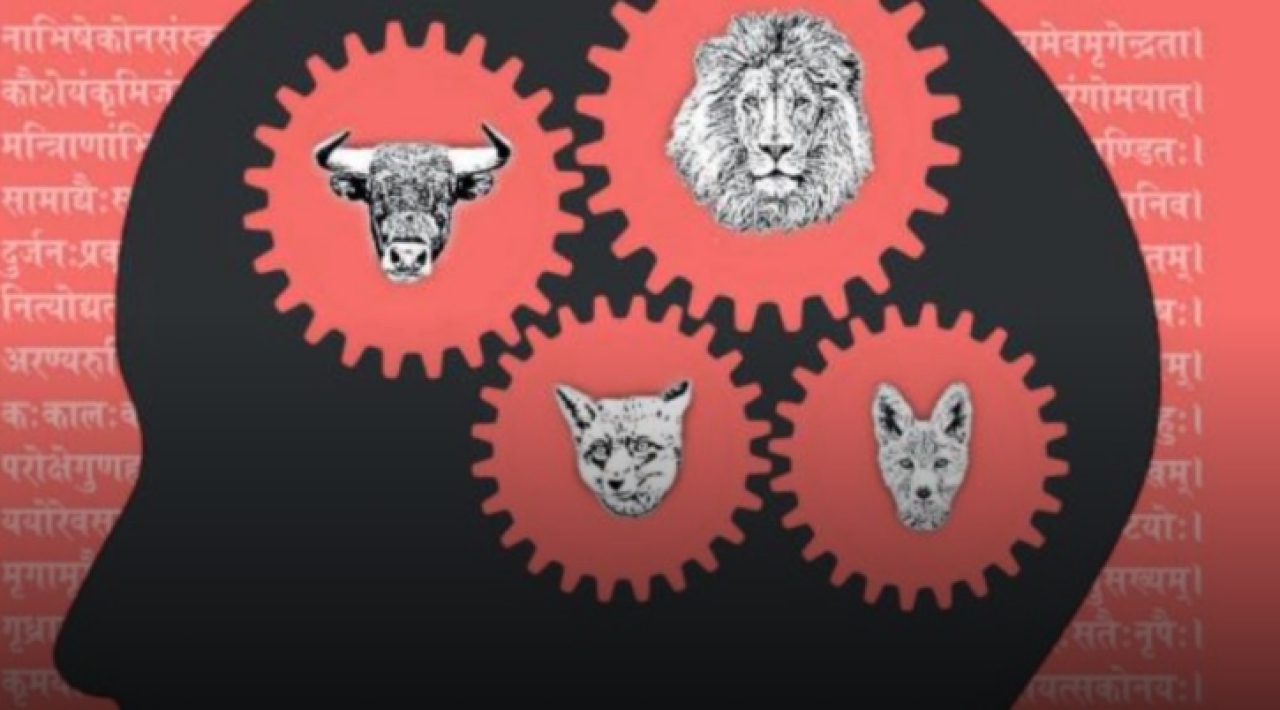 Natural Enmity: Reflections on the Niti and Rasa of the Panchatantra by Ashay Naik

Indic Book Club will be hosting an Indic Chat on Facebook Live by Ashay Naik at 11am (IST) on 20 August.

Naik will talk about Pancatantra as a nitisastra (political treatise) and how the work conveys its message through rasa (aesthetic emotion) produced by its narratives.

Naik’s book, Natural Enmity: Reflections on the Niti and Rasa of the Panchatantra, is a commentary on the first tantra of the Pancatantra – The Separation of Friends. It brings an understanding of the frame story and its 30 sub-narratives. He says, “India has a great commentarial tradition with regards to texts like the Gita and Manusmriti. But commentaries on works of the katha genre tend to be largely linguistic – explaining the figurative or suggestive meaning of words, synonyms, resolving sandhi, etc. We need to extend our commentarial tradition to narrative texts and explain their understanding of the world and the human condition, their theories of government, gender, etc.”

Naik’s aim was to take the reader into the world of the Pancatantra, as well as try to bring the Pancatantra into our world. “The world of the Pancatantra, radically different from our own, was built on the principles of social hierarchy, political despotism and patriarchal, kinship communities. The commentary explains how the Pancatantra seeks to build a decent society in this zeitgeist. But, I also show how its lessons can be applied in the present context by translating the kinship-based political messages to the ideology-based politics our times, or the svamin-bhrtya (master-servant) dynamic to the problem of office politics.”

The tradition of story-telling opened doors to Panchatantra. Initially, he was under the impression that it is simply a collection of wit and wisdom narratives for children and not meant for a serious study, realised he had entered a different world.

For this book, he referred to primary sources – Sanskrit texts of the Pancatantra – the Purnabhadra edition by Hertel and the vulgate edition by Keilhorn. “Works on the Pancatantra by Taylor and Olivelle were important as representatives of contemporary Western scholarship on the text. I consulted works dealing with political thought of ancient India to understand the samrajya and ganarajya which are the two political paradigms used in the Pancantantra. My study of the Arthasastra, Manusmriti and Mahabharata, though rudimentary, also proved useful.”

Initially, Ashay had thought that anyone interested in knowing Indic thought should study Vedanta, Dharmasastras, etc. He took up a course in Sanskrit at the University of Sydney, so he would be able to read these texts. He came across a book The Fall of the Indigo Jackal, by McComas Taylor, Sanskrit professor at Australian National University, and a couple of essays on the Pancantantra written by Patrick Olivelle, Sanskrit professor at University of Austin, Texas. “I realised that not only are ancient Indian narratives studied seriously, but that, in contemporary Marxist-influenced scholarship, they are interpreted as modes of normalising caste and gender oppression in society,” he adds.

For his thesis, he chose to rebut the argument of Olivelle and Taylor – that Pancantantra narratives seek to promote social oppression. He explains, “I showed how the narratives modelled a political world and could be read as case studies to demonstrate various political situations. That is when I realised how terribly we have underestimated the Pancatantra as a book of children’s fables. It is a nitishastra, as it claims to be, and needs to be studied as such.” His thesis was well-received by his guides, Prof. Mark Allon and Prof. Andrew McGrarrity at the University of Sydney. “After completing it, I thought that the Pancatantra deserves a full-fledged commentary that would describe its political thought in detail. That is how I got to writing Natural Enmity, which covers the first tantra (almost 50 per cent of the book) – The Separation of Friends,” he adds.

Which story fascinates him the most? “All Pancantantra stories have something to offer us. If I had to pick one from the first tantra as the best, then it would be the one in which the camel is deceived by the jackal into offering himself as food for the crippled lion who is unable to hunt and is about to die. On the surface, the camel has been tricked, but on reflection, we realise that what he was tricked into doing was his duty under those circumstances. The lion was the master and all his meat-eating servants, having failed to procure any food for him, were ready to die along with him.”

According to Ashay, the camel story is the best example of how deeply the Pancatantra has studied human nature and the poignancy with which it communicates its lesson such that in the end one can empathise with the lion, the jackal and the camel. He adds, “The camel only wanted to enjoy the lion’s protection, even when he offered himself, it was out of the hope that the lion would reject his sacrifice, because he did not want to appear bad in front of his peers. The lion, who had given him protection, also, at first refused to kill the camel because it would be contrary to honour. But when the camel foolishly offered himself as food, the temptation became too difficult for him to resist. We see this in The Separation of Friends as well. Samjivaka, the noble, tragic hero, is not without his faults, and Damanaka, the scheming villain, is coping with his own struggles.”

What does Pancatantra tell us about niti ? “Niti in the Pancatantra can be understood in terms of political ideas such as the importance of forts, treasury, not trusting the enemy, etc. But, it can also be and should be understood as confronting political challenges and managing political situations. This is revealed through the dynamic of a grass-eating outsider (a bull, a camel or a man) who stands for peace, cultivation of arts, etc. into a government consisting of meat-eaters (jackal, etc.) who stand for aggression and how the lion king needs to navigate between these two extremes; or through a mass agitation, common people can put pressure on the king so that he executes justice. It demonstrates the practice of strategic and tactical thinking, the problems that refugees pose to their hosts and hosts can pose to their refugee.”

Here’s how Pancatantra brings clarity. “It gives us insights into the problems involved in the functioning of a samrajya, the rule of the samrat, where the king is a lion and the ministers are of an inferior jati such as the jackal, and in the functioning of a gana- or sangha-rajya, the rule of the ganaor sangha, where the king and the ministers are members of the same jaati,” he explains.

How should the reading of Pancatantra evolve? “The narratives of the Pancatantra are extremely rich in meaning i.e. there are a lot of knowledge that you can draw out from them depending on your ability to grasp it. Children, for example, may learn ideas such as the danger of trusting strangers, knowing who are their true friends, and so on. Elders may learn different lessons, such as the importance of participating in politics, reflection on the merits and demerits of different type of government (monarchy, oligarchy, anarchy), issues of migrants, etc. Finally, the Pancantantra is a meditation on the unsatisfactoriness of worldly life, how its problems are ultimately irresoluble and it instills a mature and sensitive approach to dealing with life,” he says.

The same story, according to Ashay, can be read at different levels depending on the reader’s maturity. “For example, the famous lion and hare story can be read as the superiority of brain over brawn. At the same time, it invites a debate a monarchy controlled by rajadharma, on the one hand, and anarchy i.e. statelessness on the other,” he adds.

How is the message of niti conveyed through rasa? “The Pancatantra does not present its message in black and white. There is no character here who is totally good or totally evil. Therefore, the reader can think from the point of view of all characters and empathise with their struggles. I have already given the example of the camel’s story above. The Pancatantra encourages you to feel for all its characters and by empathising with them you interiorise the lessons they learn. That is what I mean when I say that it conveys its niti through rasa. The sthayibhava of the text is karunya (compassion) and it is by feeling karuna for all the characters and their political struggles that we grasp its lessons.”

Join Ashay Naik on Facebook Live at 11am, Sunday, 20 August to know more about niti, narratives and the world of the Pancatantra.

Get Swarajya in your inbox everyday. Subscribe here.
Tags:
55 Shares