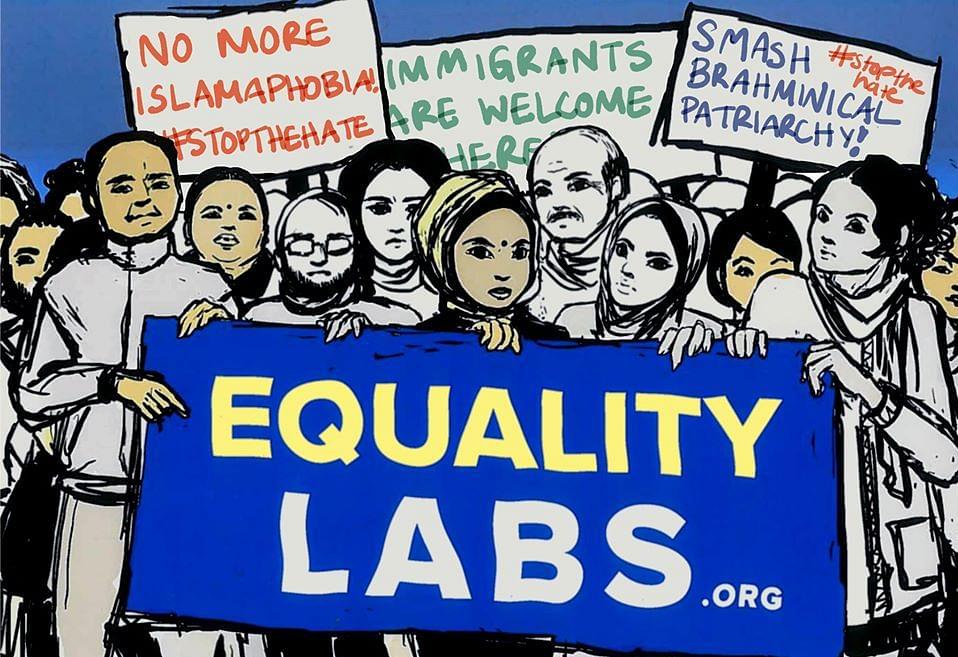 Equality Labs promotes itself as a social justice organisation that fights for justice and the freedom of the oppressed south Asians. In reality, however, the organisation focuses on demeaning and defaming Hinduism and its adherents and promoting hatred for both.

This will be illustrated through a review of the organisation’s publications and social media posts and a review of its connection to historical figures, who were prominent in spreading hatred for Hinduism and its adherents.

Of all the adherents of Hinduism, Equality Labs is most obsessed with Brahmins, the subset of Hindus who were traditionally engaged in acquiring, preserving and transmitting knowledge in a variety of areas including philosophy, astronomy and Sanskrit.

The Brahmins, who represent no more than 5 per cent of India’s population today, have been the prime targets of the organisation’s hate. This hate is driven by a fallacious claim that the Brahmins represent a privileged class.

Today, as noted by prominent historian Meenakshi Jain, due to consistent application of discriminatory policies against Brahmins, they constitute one of the most impoverished communities in India.

Equality Labs’ obsession with Brahmins can be easily gleaned from its “Smash Brahminical Patriarchy” poster and repeated pejorative references to Brahmins in its articles and social media posts.

It can also be indirectly discerned from the Brahmin hatred that pervades the social media posts of trolls who have been influenced by the hateful propaganda of Equality Labs.

Equality Labs uses terms such as Brahmins and Brahminical interchangeably with Hindus and Hinduism as the ultimate target of the organisation’s hateful rhetoric is all adherents of Hinduism.

This is demonstrated by the 2018 report titled “Caste in the United States” that Equality Labs produced to peddle its anti-Hindu message. Suhag Shukla, executive director and co-founder of the Hindu American Foundation, describes the organisation’s report as follows:

The overt bias of the authors cannot but inform the survey methodology. If the survey is disseminated and then analyzed by the same people who call Hinduism an evil, social construct, it’s difficult to deny observer bias.

This characterisation of Equality Labs’ report is too benign as the report can reasonably be described as hate propaganda dressed up with an unscientific survey to give it a veneer of credibility.

Ironically, despite embracing an anti-racism rhetoric, Equality Labs promotes debunked racist theories about Hindus and Indians in general. These theories can be traced directly to British and German Indologists, who in their efforts to promote white European and Christian supremacy invented baseless and far-fetched narratives about Hinduism and its adherents under the guise of academic study.

Their characterisations of Hindus were largely driven by their theories on race and their disdain for ideas that did not coincide with their Christian worldview.

For example, the British Indologist James Mill has described Hindus as vile, backward, and subhuman in his monumental work, The History of British India.

In this book, Mill provides a deprecating description of the Hindu conception of the universe by stating the following:

No people, how rude and ignorant soever, who have been so far advanced as to leave us memorials of their thoughts in writing, have ever drawn a more gross and disgusting picture of the universe than what is presented in the writings of the Hindus.

His contempt for Brahmins, who he has characterised as conniving, power-hungry, and unethical is illustrated in this statement:

The Brahmens among the Hindus have acquired and maintained an authority, more exalted, more commanding, and extensive, than the priests have been able to engross among any other portion of mankind.

German Indologists have followed a similar approach in describing Hinduism and its adherents. Richard Karl Von Garbe articulated his view of Hindu deities in the following manner:

There is no bridge from the radiant forms of the Veda to the forms of the modern gods [of Hinduism], whose monstrous representations with their tastelessly multiplied animal limbs and so on, should be familiar to all, at least as a type. In spite of their Aryan names, I consider the modern Hindu gods — Shiva, Vishnu, Durga, Hanuman, and whatever else they may be called — not for Aryan conceptions, but for conceptions of the aborigines.

In fact, the German Indologists went beyond belittling Hinduism. Christian Lassen, the founder of German Mahabharata studies, was the first to formulate the tenuous Aryan Invasion Theory, which is the basis for racist movements against Hindus, particularly the minority Brahmins, in the southern Indian state of Tamil Nadu.

These racially motivated characterisations of Hindus promoted by James Mill, Richard Karl Von Garbe, Christian Lassen and many other Indologists of their ilk have fuelled virulent anti-Hindu movements across India.

These anti-Hindu movements, which are primarily directed at Brahmins, are most prevalent in the state of Tamil Nadu. There the two main political parties subscribe to a political ideology of Hindu hatred that can be traced to E V Ramasamy also known as ‘Periyar’.

Ramasamy, who is the godfather of the anti-Brahmin movement in Tamil Nadu and a source of inspiration for the founder and executive director of Equality Labs, was in favour of utilising intimidation and violence to drive all the Brahmins out of Tamil Nadu.

Ramasamy’s hatred for Brahmins and Hinduism was largely based on the Aryan Invasion Theory, which he cleverly adopted to paint Brahmin culture as foreign to Tamil Nadu. His speeches are a repository of anti-Brahmin hate and are not dissimilar from Nazis’ tirades against Jews.

This is not surprising since Ramasamy’s hate was based on the fanciful theories of the original German Indologists such as, Christian Lassen, “the father of German racial anti-semitism”, who had anti-Semitic tendencies.

One example is cited by P A Krishnan’s article in The Wire. In it, he mentions that Ramasamy kept making blood-curdling threats to Brahmins. He provides the following example:

...in an article written in Viduthalai on July 27, 1947, [Periyar] says Aryans – read Brahmins – living in the Dravida land (which he calls “our land” and distinguishes it from Hindustan) would be solely responsible if Noakhalis happened there. He exhorts Aryans not to be the agents of northern imperialism and betray the Dravida land. History tells us that those were dangerous times, and if a few lunatics had taken Periyar’s call to violence seriously, the outcome would have been disastrous.

He then goes on to provide an example of Ramasamy’s characterisation of Brahmin women as prostitutes:

His views on Brahmin women do not fit well with his image of a great liberator of women either. In an editorial written in Viduthalai on March 4, 1969, [Periyar] says the Brahmin priests act as pimps for their wives in a few religious places.

Equality Labs has learned to combine the racist and hateful theories about Hinduism and its adherents formulated by British and German Indologists with a hate-filled political ideology of Ramasamy to appeal to a gullible fringe of the political left in America.

However, the organisation is using the cover of social justice to dupe some and gain the tacit support of others who support the organisation for moral posturing and other self-serving reasons.

The divisiveness and hate promoted by this organisation pose a specific danger to Hindu Americans. It is thus imperative for reasonably minded people to understand the history of the hate this organisation is promoting and rebuke politicians and media outlets that are providing it overt or tacit support.