Mamallapuram: Then And Now 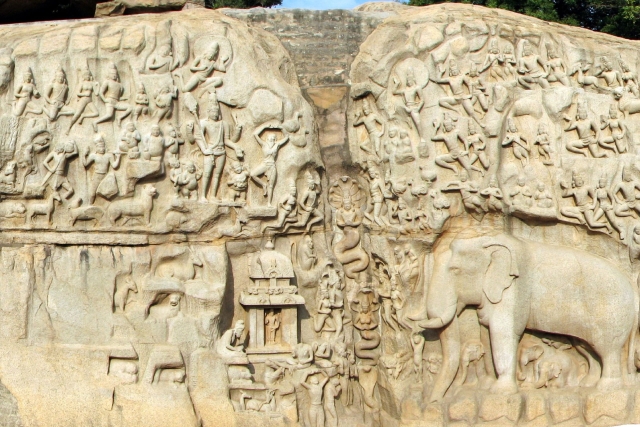 Few wise men and thought leaders for India’s national security once laughed at the mention of the maritime reach of the Deccan empires.

It was humorous to them, the idea that the kinds here had anything to do with the sea or had a blue water navy. Today, a simple search can bring up the history of the Chola, Pallava, Pandya and Chera dynasties.

Thank God for 4G and Wiki.

It is indeed a pity that history books and popular culture (aka Bollywood and even Kollywood) forgot the “southerners” post Independence. The laurels and glory of what happened to Delhi alone stayed as history.

Interestingly, most of it happened to Delhi than Delhi influencing things outside. Someday, if not the school kids, at least war colleges ought to be taught about the southern trio and their empire.

R “Kalki” Krishnamurthy in his epic mega serials of his era had chronicled the stories of the Pallavas and Cholas.

In his epic, Sivagaminyin Sabadham, he narrates the genesis of a town in honour of Mamalla (the great wrestler), Mamallapuram. The author, in fact, starts the story by saying clearly that with some facts available, he is using his imagination and opinion to create the rest of the story.

(A trivia to ponder on, was Sivagami Devi in Baahubali a character developed from Kalki's Sivakami ?)

China has to be appreciated both for its resilience and its desire to be modern with a clear understanding of their past.

Millennia of decay, misrule and indenture hasn’t been good enough to make them forget their past.

The Belt and Road Initiative is an excellent example of it recreating its past trade routes.

An important aspect to remember in this initiative is the sea silk route.  A route that the Chinese couldn’t dominate on thanks to the blue water navy and gunboat diplomacy followed by the Cholas and Pallavas.

This virtual dominance of the sea route --- with full rearguard and dry-docks in islands all the way from Africa to China along important choke-points --- is a worthy past that post-colonial India didn’t work on, except for a brief time in the 1970s and 1980s when India tried to resurrect Lakshadweep in the Arabian Ocean, and Andaman and Nicobar in the Bay of Bengal.

Mamallapuram port city might have been the epicentre of trade during the Pallava and Chola period. Apart from being the place from where the initiator of Shaolin tradition and Zen Buddhism, Bodhidarma would have most likely sailed on his mission.

A port that should have most likely been a key pivot to supply the troops in the conquest of Lanka when they were caught in a stalemate during Arul Muzhi Verman’s (later on Raja Raja Cholan’s) campaign (will be good to read Kalki’s Ponniyin Selvan for the folklore part!).

A port city that probably had schools on stone masonry to train masons who built huge temple complexes in India and in many places in the Indo-China region.

Like all good things the sun literally set on this port when it was abandoned by the East India company. The red coats preferred to build their safe house in Fort St. George and make Madras (Chennai) their capital.

A port with not enough draft was deemed fit to house the garrison for safety and to command the high seas. A location that had no great geographical features or resources to attract an attack but with a good vantage to defend the bay and hinterland.

Similar to the work done by the Chola dynasty, it appears that our incumbent PM has started the charm and awe mission to position this land in a contest for every inch of high mountain passes or deep seas.

This is a long game that will have to be fought both internally and externally.

Patience is the virtue in this game where there are no permanent enemies or friends.

Team India under its current Captain has aptly picked this important trading port of the old days, Mamallapuram, to have the “informal” meeting. Coincidentally, the point persons for Team India in foreign affairs and finance both seem to come from near Woraiyur, the ancient capital fo the Cholas.

The long walk over the high passes or the perilous sailing over the deep seas continues for Team India. It is good to see that the Captain and his team are all aboard on this long voyage!