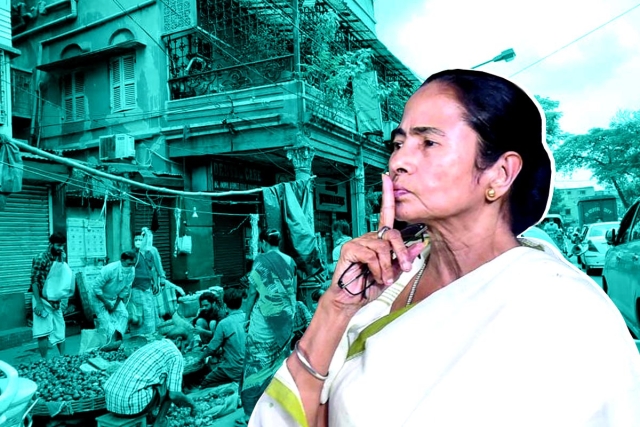 Mamata Banerjee came to power in 2011 promising the change that every Bengali desired after a 34-year misrule of the Communist Party. Under the Communists, with rampant political violence and official inefficiency, Bengal was reduced to a shadow of its former self.

A state that once boasted of being a great trade centre and which was the intellectual and spiritual centre of India’s freedom struggle, was left wanting for change. People yearned for a leadership that would steer Bengal in the direction of development and growth.

Today, however, the state of affairs such that the Chief Minister herself has accepted that her party members take ‘cut-money’ which is a commission for state government schemes. One can only imagine the state of affairs in Bengal if a poor beneficiary has to first pay a sum of money to avail of government benefits; that too, at a time when crores of people across the nation are receiving assistance through Direct Beneficiary Transfers.

Even the relief meant for those affected by Cyclone Amphan wasn’t spared by the cadres of the incumbent Trinamool, with several complaints being registered against office-bearers of the party for misappropriation of funds.

The TMC, in its quest to retain power has not only continued to indulge in political violence, but it has provided the necessary impetus for further criminalisation of politics in the state.

Ever since PM Narendra Modi-led NDA government came to power in 2014, more than 100 BJP workers have been killed in Bengal.

Back in 2012, a Jadavpur University Professor was arrested for merely forwarding a cartoon of Mamata Banerjee. This was just a year after she came to power, giving the people of Bengal a glimpse of what is to come in the days ahead.

It was expected of Ms Banerjee to develop the state after coming to power, for it was she who spoke about poriborton. The people wanted more economic activity in the state, better educational and health facilities along with employment opportunities. The masses were also concerned with the growing illegal Bangladeshi population in the state.

However, one can look back and say that CM Banerjee has not delivered on any of these parameters.

As a border state, it is essential for the state of West Bengal to have good road connectivity. However, despite spending Rs.1,109 Crores on rural road construction, the delivery rate has been dismal. Only around 41 per cent of the projects undertaken have been completed. The lack of development in the state is evident from the fact that around 90 per cent of the rural households don’t have piped water connections to get water.

But it isn’t only lack of development that is hurting the ordinary Bengali, CM Mamata’s pandering to radical Islamic elements has Bengal in perpetual state of uneasy calm. Her attempts to delay the Durga Pooja immersion processions because it coincided with Muharram rallies was a blatant attempt to put Muslim interests above that of Hindus.

In January 2020, students of a government-aided school in North 24 Parganas were beaten up because they merely demanded a resumption in celebrating Saraswati Pooja.

In September 2018, school students in Islampur district were protesting against the appointment of teachers who were to teach languages like Urdu, whereas the requirement was that of teachers for science and mathematics. What followed was that Bengal Police opened fire on the students. This left two young Dalit boys, Rajesh and Tapas dead. Not once did the government try to reach out to the families of the Dalit boys killed, neither did they try to resolve the matter that students were protesting against.

Despite having political differences, one would expect the Bengal Chief Minister to keep these differences aside when the issue is national security and territorial integrity of India. Instead, her party maintained ‘strategic restraint’ by not commenting on the Surgical Strikes post the dastardly Uri Attack. This, despite two of those killed by Pakistan-backed terrorists in the Uri attack came from Bengal.

However, after the Pulwama attack, that shook the conscience of the nation, the Indian Air Force carried out a daring air strike on terror camps across the border in Balakot, in Pakistan-occupied-Kashmir. Instead of boosting the morale of the forces, she questioned the timing of Air Strikes and demanded details of the operation. At a time when India was preparing for any military eventuality, such statements from an elected Chief Minister betray irresponsibility.

All of these instances make an ordinary citizen ask one question, is this the poriborton that she promised? Is this the change that Bengalis voted for?

Mamata Banerjee’s two terms as chief minister have made the people of Bengal realise that she was another Communist in a shade of green. Her tenure symbolises misgovernance, corruption, lack of development and minority appeasement.