The Collapse Of Venezuela Under Socialism 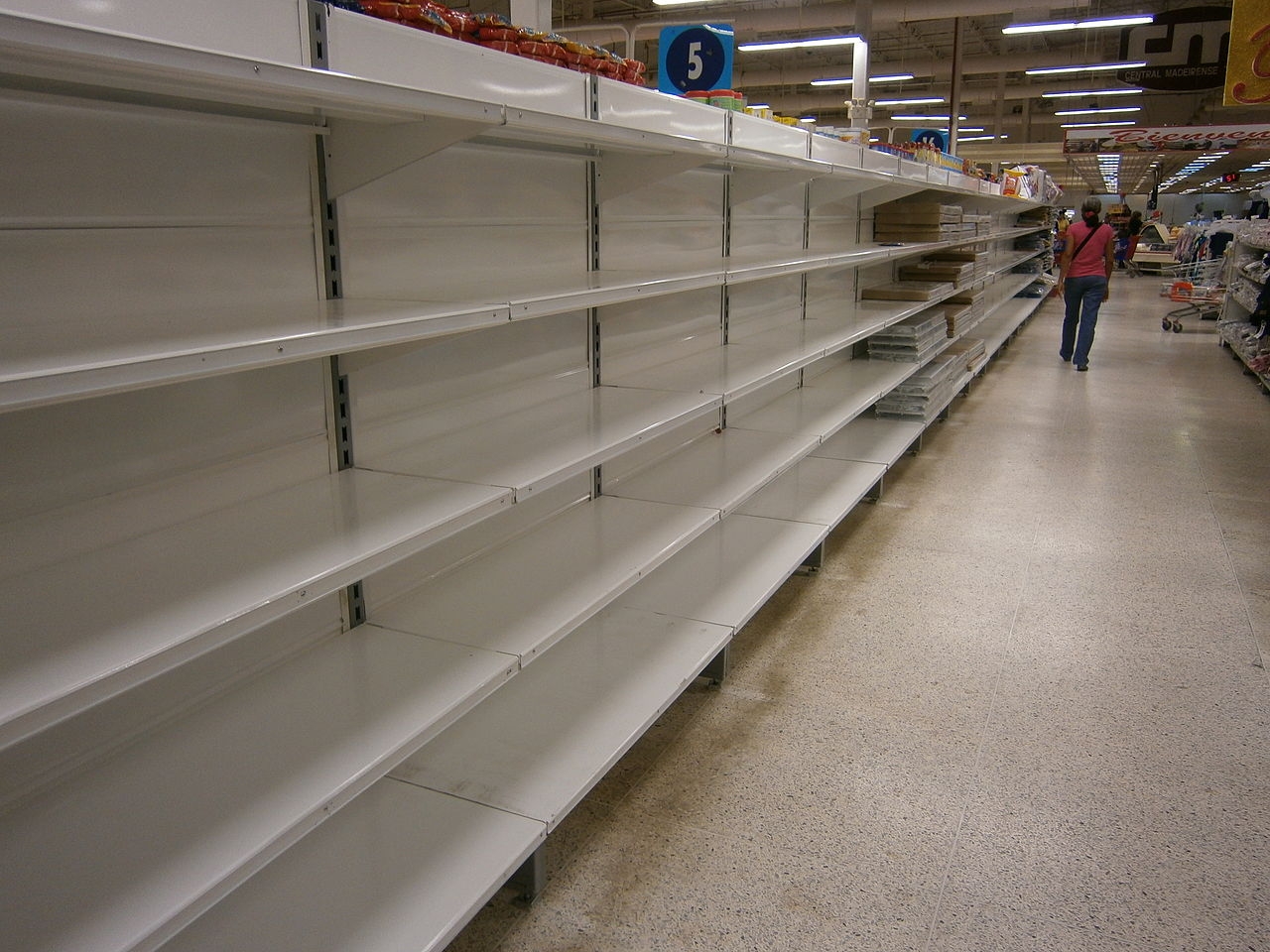 Empty shelves in a store in Venezuela due to shortages. (Wikipedia)

Collapses only make sense in retrospect, and trying to stop it while it is falling is like trying to catch and reconstruct a Jenga tower as it topples.One can expect ruins of the tower to remain there and then collect few pieces to rebuild the tower, but the damage has been done already. You have lost your resources. One country Venezuela has fallen into the trap of socialism.

Winston Churchill once said “Socialism is a philosophy of failure, the creed of ignorance, and the gospel of envy, its inherent virtue is the equal sharing of misery.”

Ian Birrell says there is almost nothing to buy in Venezuelan shops, with shortages from flour and nappies to medicines and underwear. This is the consequence of this century’s most famous experiment in Socialism, first under President Hugo Chavez and then his successor Nicolas Maduro. A spendthrift government trying to fix prices and subsidise goods has wrecked a once-prosperous, middle-income nation.

According to a World Bank report, the welfare economy helped Venezuela’s growth,and resource redistribution led to a significant decline in poverty (from 50 percent in 1998 to approximately 30 percent in 2013). Inequality also decreased, as reflected in the Gini Index, from 0.49 in 1998 to 0.40 in 2012, among the lowest rates in the region.

But, then the country saw a massive dip into its economy. After 18 years of socialist spending, inflation has hit 720 %, the IMF says, and zero value of Venezuelan Bolívar(official currency of Venezuela). All this happened because of country’s incompetent economic policies and Keynesian theories which led to more spending than savings.

The country faced major fiscal deficit estimated at 20 percent of GDP at the end of 2015, and external financing needs estimated at between USD 25 billion and USD 35 billion in short and medium term. Today, the country with the world’s largest oil reserves (298 billion barrels)is forced to import oil, according to the Energy Information Administration.

During the boom period, Venezuela did not save enough when the price of each barrel was USD 100+ to ease a reversal of trade or to do the necessary adjustments,which resulted in Venezuela becoming one of the worst economies in the world. To come back to the original position they need the petrol prices to go back up and reach at least $121 per barrel which as of now is $47.5.The Government of Venezuela started controlling the 3Ps to “help” the citizens—prices, profits and production.

They decide how much a particular product must cost, how much one can earn from it and how much the production should be. President Chavez (1999-2013), introduced price controls on some basic goods in 2003 to make products easily available and cheap to the poor. The costs of items such as coffee, milk, flour, corn oil etc.were capped. This new regulation started hurting the manufacturers and forced them to operate at a loss.

Some stopped producing those goods,while others refused to provide goods for government-run stores. We all remember the shortage of toilet paper; it was precisely because of these reasons. This control lead to massive poverty in the nation, so much so that hungry Venezuelans hunt stray animals like dogs, cats, pigeons as food runs outand shortage in food leads to widespread looting of shopping malls, pharmacies, and food trucks.

According to a report in PanAm, six Venezuelan military officials were arrested for stealing goats to ease their hunger, as there was no food at the Fort Manaure military base. Thaminia, an acquaintance of mine from Venezuela has revealed some shocking truths. She told me that there are lines in front of grocery stores to buy something which should ideally take 30 minutes. There is proper rationing of food and water in the city.

People are only allowed to shop for groceries twice and they are being monitored and penalized if they try to shop more than the assigned quota.The food is always limited and most people can’t even afford the little that is available. There is scarcity of electricity, people cannot work properly and hence weekends start from Friday.

Tyler Durden mentions that one cannot find aspirin, or basic products like stomach pumps and scalpels. The only company that produces synthetic adrenaline left the country because there is strict monetary control.Companies cannot import medical supplies. So you go to any hospital, and you can see people on the floor bleeding and dying because they don’t have enough beds, scalpels, cleaning agents.

It is bizarre that all across the globe teachers teach about socialism and theories, and how these policies are good for the nation but they often do not highlight the horrors of this failed system. Students do not learn the ill-effects of socialism in USSR, Cuba, Argentina, Greece, India (now and before 91) and other such countries.

We only learn about the freebies that we get or the “equality” that socialism promotes but we miss the reality of socialism. In fact, the common refrain is that the disastrous consequences are simply a result of an ‘implementation problem’, and not a flaw in the system. People are so keen on “free” benefits, that they continue to tout this as a good system, even as examples of collapse surround them.