Neither Nehru Nor America, Lion’s Share Of Blame For Tibet’s Demise Lies With Its Own People 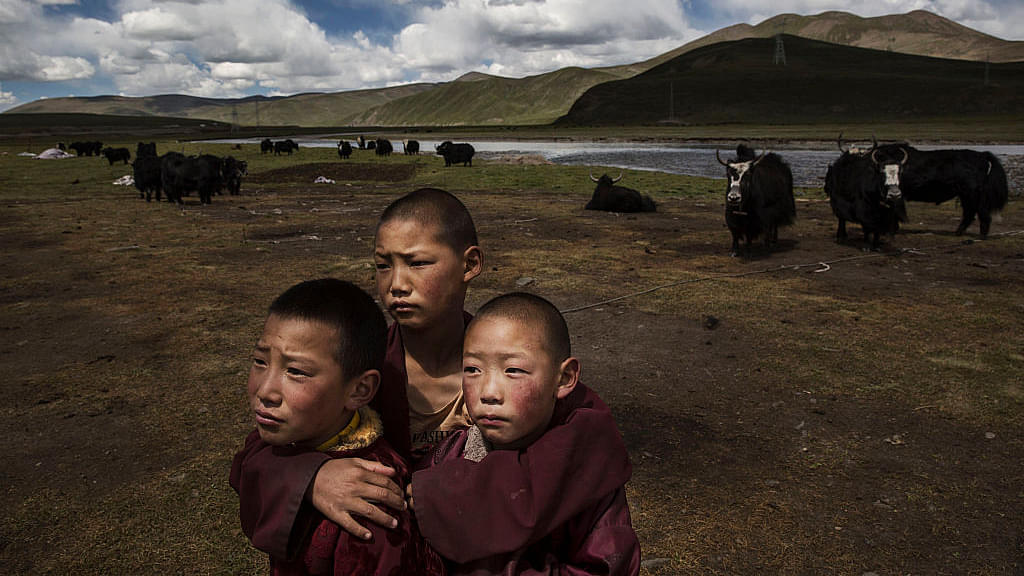 Young Tibetan Buddhist novice monks stand in the grasslands of their nomadic camp on the Tibetan Plateau in Qinghai, China. (Kevin Frayer/Getty Images)

In the broader story of freedom and liberty, the case of Tibet is seldom heard. Journalists and activists scream about the Syrians, Rohingyas, Kurds and even the Yezidis, but one of the greatest acts of geographical and political usurpation and cultural and demographic genocide of the Cold War era – Tibet – gets only an occasional mention in the international press. Tibet: An Unfinished Story by Lezlee Brown Halper and Stefan Halper impressively details the sad history of the Roof of the World from its earliest mentions in the West to its conquest, annexation and subjugation by China, and to eventual relegation to oblivion by the world community.

Ostensibly starting with Herodotus' mention of Tibetan gold-prospecting ants, the Halpers quickly move through the mythologising of Tibet in the eighteenth and nineteenth centuries by the British – no doubt, due to difficulty of access and a curious Oriental warp westerners have always displayed – and German interest in the early twentieth century in locating the Aryan homeland in Tibet to the critical years after the end of the Second World War when Tibet became one of the first pawns in the Cold War.

The book is impressive in its use of archives from the United States (US), Britain and available Chinese and Indian sources. The basic premise of Tibet is that the country was abandoned – betrayed? – by India, the US and Britain in its hour of need against China. Not only did Tibet not receive much military support, but it also found little bilateral political assistance even from the United Nations. Meanwhile, Mao systematically crushed the Tibetans. While this argument carries some weight, it does not consider the Tibetan role in their own fortunes, nor does it account for the material realities of the late 1940s.

The end of the Second World War saw the rise of Soviet power and the US at once committed to fighting the spread of communism around the world. Tibet was a point of contact between the communist bloc and the non-communist world. However, Washington found itself restrained in its support for Tibet by several factors.

One, the British, who had ruled over India and indirectly extended influence into Tibet after a military expedition in 1903 – in an effort to protect the jewel in the Crown, of course, against imagined Russian designs – accepted Chinese suzerainty over the Himalayan state, though not sovereignty. This was a different position from that of George Curzon, who had stated in the British parliament that Chinese claims on Tibet were a constitutional fiction.

Two, the Himalayan terrain was difficult to access even with aircraft. During the Second World War, the Office of Strategic Services had tried to supply the Chinese Nationalists against Japan (and the communists) via Tibet, but the mountains proved a difficult obstacle for early aircraft, and Lhasa was unwilling to cooperate.

Three, Jawaharlal Nehru did not want the Cold War to come to Asia. The Indian prime minister was not open to the idea of a new imperial power – that is how Nehru saw the US' actions in Europe and elsewhere – establishing a presence in India; furthermore, he was afraid that a substantial US presence would antagonise the Chinese into hostile relations with India, who had to live with China even after the Americans left.

And finally, four, despite an ongoing war between the Communists and the Nationalists in China, both sides agreed that Tibet was indisputably Chinese. The Nationalists thus became an obstacle in US policy towards Tibet as well.

The US did conduct covert operations in Tibet. This was done with Pakistani help rather than Indian, resulting in greater complications in the India-US-Pakistan triangle. These operations, as US intelligence had already foreseen, did not amount to much in the ultimate reckoning.

The Halpers put a fair share of the blame for the loss of Tibet on Nehru. They fail to consider, however, that there was little that Delhi could do in terms of providing military or economic support to the Tibetans. India was a new republic that was itself going through the pangs of Partition and faced a war in Kashmir after its twin, Pakistan, had instigated Pashtun tribesmen into invading the province. A poor economic and industrial base meant that India's only realistic contribution to a Tibetan struggle would be to provide the geography for western powers to fight. Additionally, Nehru was sceptical of Washington's resolve: he did not believe that Harry Truman was as committed to the cause of an independent Tibet as he was to Western Europe. He was right in his suspicions: in a May 1950 meeting with his British counterparts, Dean Acheson had explained that the US State Department did not see the possibility of resisting the Chinese Communists in Tibet. However, "little covert assistance in the form of specialised military instruction and supplies to the Tibetans might make a Chinese military expedition prohibitively costly." In other words, Washington's aim was not to protect Tibet so as to use the country to harass the Chinese communists. Nehru did not believe that this low bar sufficed Indian intervention.

The cynicism of the US and the idealism of Nehru's pan-Asian dream were partly responsible for Tibet's demise. The lion's share of the blame, however, must rest with the Tibetan leadership. After the death of Thubten Gyatso, the thirteenth Dalai Lama, the country was wracked by a struggle for succession. A regent – Thubten Jamphel Yeshe Gyaltsen, of the Reting monastery – was put in place until the next Dalai Lama could be anointed, but he was known for his fondness of beautiful women and other habits unbecoming of a spiritual leader of the Tibetans. He was replaced by Taktra Rinpoche in 1941 but led a failed uprising against his successor in 1944. The infighting among the Tibetan elites, monasteries and the Kashag – Tibet's governing council – diluted Tibet's voice to the outside world. Some sections were content with autonomy under Beijing while others wanted complete independence.

To compound problems, the Tibetans were not yet educated in the ways of modern statecraft. They did not take the Chinese threat seriously, seeing them as merely the descendants of Szechuan warlords and reasoned that they could be easily defeated. When China finally did invade, the Tibetan National Assembly telegraphed Mao Zedong,

This is a sacred place of Buddhism, which does not allow armed force from foreign countries. This type of bullying activity shall not happen... We hope you order all border troops not to exercise force against Tibetan soldiers and immediately withdraw to their original locations.

Needless to say, the message went unanswered by Mao. Perhaps the worst example of Tibetan incompetence is the incident at the fall of Chamdo, an important city in eastern Tibet on the route to Lhasa. As Chinese soldiers neared the city, the governor, Ngabo Jigme, frantically sent messages to Lhasa asking for instructions. After several messages went by without a response, his aide-de-camp finally got through to the Kashag aide-de-camp only to be told, "Right now is the period of the Kashags' picnic and they are all participating in this. Your telegrams are being decoded and then we will send you a reply." The aide's angry and frustrated response, skyag pa'i gling kha!, is quite understandable.

Tibet meticulously explains the key players in the sad saga. The authors analyse the political trends in Indian non-alignment politics and superpower rivalry in detail. Tibetan idiosyncrasies are not entirely left out. The Halpers relate one instance when Nehru yelled at Tenzin Gyatso, the new Dalai Lama, upon being told that Tibet must have independence. "That is not possible!" the Indian prime minister exploded, "You say you want independence and in the same breath you say you do not want bloodshed. Impossible!" At first glance a hypocritical outburst from a man who had, with Mohandas Gandhi, led India to independence through non-violent means, careful and objective consideration reveals that Nehru did not believe that non-violence was possible with all enemies.

The Halpers point to Nehru's poor council on China – V K Menon and K M Panikkar have been lambasted by Indian scholars for their excessively anti-imperialist and pro-China perspectives, attitudes that landed India in trouble in 1962. Between Nehru's approach to Indian national interests and the jaundiced views of his advisors, Tibet stood little chance. However, recent scholarship has also revealed that India's first prime minister was concerned about the threat China posed to India. He expressed such thoughts privately to a select group of confidantes while publicly proclaiming brotherhood with the Chinese. To be fair, Tibet is not about Indian foreign policy or Nehru but about how actions, rather than thoughts, played out in Tibet's story.

Tibet is an excellent read for any reader wishing to acquaint himself with the general contours of Tibetan history in the mid-twentieth century. Its placing of blame, however, seems to come from a sense of anguish – that all lovers of Tibet share – than the scholarship done even by its authors. Particularly commendable is the way the Halpers have shown how the different strands of the Tibetan issue – actors, political compulsions, material restrictions – all interlinked to a final tragic outcome.