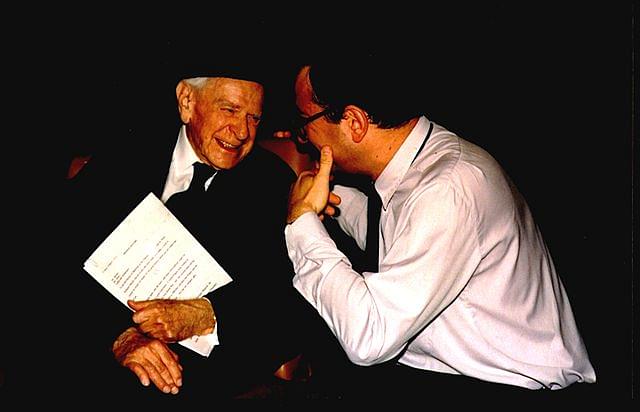 The Indic knowledge system needs its own ‘Epistemology’ and we need our own version of Karl Popper.

I don’t know whether God exists or not. … Some forms of atheism are arrogant and ignorant and should be rejected, but agnosticism—to admit that we don’t know and to search—is all right. … When I look at what I call the gift of life, I feel a gratitude which is in tune with some religious ideas of God. However, the moment I even speak of it, I am embarrassed that I may do something wrong to God in talking about God.

Karl Popper (1902-1994) was one of the foremost Philosophers of Science and is credited with empirical falsification theories. The most modern day adaption of his work is reflected in the recent book “Black Swan” by Nassim Nicholas Taleb.

Popper belongs to the illustrious tribe of philosophers who contributed to and refined the “Theory of Knowledge” also known as ‘Epistemology’. This field concerns with the various facets of knowledge – its acquisition, nature, truth, belief and its justification.

First the case for our own Epistemology

Its ironical that the modern version of Theory of Knowledge or Epistemology can very much be related to our ancient Tarka, Nyaya and Samkhya systems which have examined the most subtlest aspect of knowledge but like most of other facets of Indic systems we never invested modern scholarship for interpreting the old in the newer world.

Let alone that, Philosophy in modern Indian academic system has never bloomed and is in a state of decay. While we feel saddened by the fact that Pythagoras is more recognizable than Pingala and Galileo is more known than Aryabhatta, we fail to understand that much of this can be attributed to institutionalization of the ‘Meta architecture of knowledge’ under the discipline of Epistemology by Western Philosophers of Science . Our ancient Indian knowledge seekers from Rishis to Mathematicians had in fact developed their own “Theory of Knowledge” which never (till date) was recognized as a formal methodology.

What is happening now rather is competitive “knowledge firsts” chase in the form of  “we knew this before, we discovered this before” and in maximizing our Pingalas, Kapilas, Panini, Arybhatthas to prove “something” and undo the “historical wrong”.

Our sciences, thought and knowledge systems will never be recognized this way till we evolve and promote our own “Epistemology” with an equal academic rigor. This Meta Indic Epistemology has to define the ground rules of knowledge system which will be debated, scrutinized and eventually evolve to be accepted as an alternate form of Theory of Knowledge.

The most critical difference as against the western system would be that the Indian epistemology has to be a construct of what Rajiv Malhotra is promoting- “Paramarthika and Vyavharika”, loosely translated as “Transcendental and Worldly” respectively, but it has to delink fact from fiction. The worldly and transcendental are integral to not just our sciences and knowledge systems but the very essence of Indian way of life.

A product of this blend of integration in the knowledge system is Srinivasan Ramanujan. Here was a mathematician who attributed many of his discoveries to the’ visions’ of complex formulae in the blood of Lord Naramasimha flowing from the deity’s eyes. The Goddess of Namakkal is as important as his derivations with Hardy. If you take out either Lord Narasimha or Goddess Namakkal then you can’t understand Ramanujan.

The case for our own version of Karl Popper

What makes Karl Popper so special was that he brought in critical questioning from the Socratic line of deep examination of knowledge till it can be falsified. Take for Popper’s view on Johannes Kepler.

Here was a scientist (Kepler) , who also had a metaphysical spirit and was also an astrologer. Popper didn’t negate or Kepler’s metaphysical or “truth seeking” counterpoint but rather critically examined them on how these shaped him and in fact contributed to his achievements.

He (Kepler) thinks that the world is filled with melodious sound…….It is a divine symphony, architecture of divine, heavenly beauty. This idea makes him relentless seeker after truth.. The truth must be beautiful. It must reveal a reality of heavenly beauty. Kepler wanted to discover this reality not approximately but precisely just as it really is. This explains why he took so seriously even a slight deviation from a hypothetical orbit.…But Kepler fought against dogmatic forms of his own astrological superstition; he was a self-critical astrologer. He taught that the fate written in the stars was not inexorable but could be mastered by our moral will. It was a major concession to the critics of astrology. Of the three great men (Newton, Galileo and Kepler), he was perhaps the least dogmatic in his superstitions.

This model is needed not just to understand the past but in the current context as well. Do we have any system for a modern day mathematician who wants to build “Fractal models” from Panini’s work or a physicist who wants to explain thermodynamics with the context of “Shakti”?

Without intuition we get nowhere-even though most of our intuitions eventually turn out to be wrong. We need intuitions, ideas, if possible competing ideas about how those ideas can be criticized improved and critically tested. And until they are refuted (indeed for longer), we must also put up with questionable ideas. For even the best ideas are questionable.