From Tata Tele To RCom To Essar: 10 India Inc Assets You Can Buy For Re 1* (*With Debt Attached) 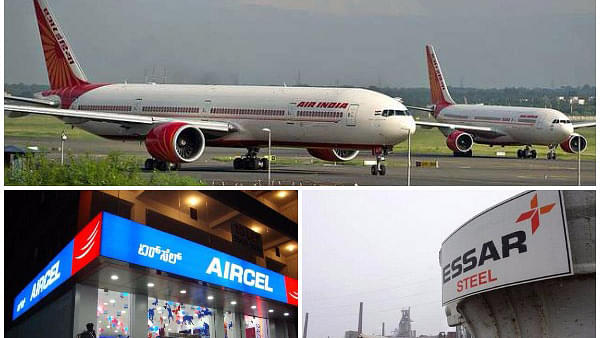 In India Inc’s scrapyard, where loan defaulting companies are accumulating very fast, it is interesting to note how many marquee names will now be available for a token Re 1 – that is, acquiring assets for free, as long as you can guarantee the humongous debt they are reeling under.

Earlier this week, Tata Sons chairman N Chandrasekaran indicated that at least two of his major companies – Tata Teleservices and Tata Power’s Mundra power plant – are a deadweight around the group’s neck, and can effectively be handed over for half a song. He said: “We have a debt of Rs 31,000 crore (in Tata Tele) and we are paying huge interest. We have a spectrum liability of close to Rs 2,000 crore and the mobile business is making a loss…. We have to sell it or have a graceful exit…”. Given the debts, the sale price obviously cannot exceed Re 1, unless the Tatas choose to shift the debt to other companies before the sale. When Telenor exited by selling to Airtel, there was no cash payment.

Then there is Tata Power, which made a huge investment in the Mundra shore-based power plant based on “cheap” Indonesian coal. But once Indonesia raised coal prices, the plant became unviable, and efforts by the regulator to allow the plant to collect more from users were nixed by the Supreme Court. So, this unit too is available for Re 1, since it’s accumulated losses – excluding debt – exceed its paid-up capital. Chandrasekaran told The Economic Times: “There are only two options. One is divestment and the other is to find cheaper coal. So far, there’s been no success on either side. We do not have a solution today…”.

Two other power units in Gujarat may also be available for Re 1, given their debt burdens, and continuing losses due to uneconomic tariffs and/or high coal prices.

These are Adani Power and Essar Power. According to a Business Standard report today (11 October), Tata Power, Adani and Essar Power have all been offered to the Gujarat government for Re 1 each. The only reason the offer hasn’t been taken up is due to the oncoming assembly elections, where this could become a poll issue.

That’s four companies with productive “assets” on the ground whose financial liabilities make them worth nothing for a prospective buyer. Hence the Re 1 tag.

Here are six other companies that can potentially be acquired for the same price (ie, Re 1), either from the promoters themselves, or the bankruptcy courts.

#5: Reliance Communications: After the collapse of its deal to merge with Aircel, its shares have crashed, and the company’s debts are killing it. With Rs 45,000 crore of debts, the share is quoting at less than a sixth of its book value, and the market valuation of the company was a meagre Rs 4,100 crore at last count. With the debt, Anil Ambani will probably give it to you for Re 1.

#6: Air India: The government’s white elephant has debts of Rs 52,000 crore, and assets far below that level. It also has huge employee baggage, though it has some real estate assets on its books. For Re 1, the government may be mighty pleased to hand it over, but even then it may have to write off a chunk of its loans to the airline.

#7: Essar Steel: With debts of Rs 45,000 crore, this second jewel in the Ruias’ crown is now a headgear of thorns. It is now in bankruptcy court, and banks will happily give it to you for free if you promise to service at least some of their loans.

#8: Bhushan Steel: Another white elephant with loan defaults worth Rs 37,248 crore. This company is also in the bankruptcy court, and hence Re 1 is a high price to pay for it if the loans come attached.

#9: Aircel: After its failed merger with RCom, Aircel, owned by Malaysian Maxis, has debts of Rs 20,000 crore which it can seek to reschedule before sale. The Economic Times reports that it cannot take the bankruptcy route, as that would cause the guarantees of Maxis promoter to be invoked. It should be available to a strong bidder for Re 1, plus debts. It could finally be sold like Telenor.

#10: IDBI Bank: The government is still hoping to make some money by divesting this bank, which has been set up under the Companies Act and thus a majority stake can be sold to private parties without legislative changes. With gross non-performing assets (NPAs) adding up to nearly a quarter of its advances, the bank is reeling under losses. It may not be available formally for Re 1, but close to it, if only to save the government some blushes.

If the various banking nationalisation acts were to be repealed, another five or six banks – currently valued by the markets under Rs 5,000 crore – could easily be acquired for share swaps. These banks include Uco Bank, United Bank, Dena Bank, Bank of Maharashtra and Corporation Bank, all with bad loans above 15 per cent.

There are jewels in India Inc’s scrapyard, but they come with a lead ball attached – humongous debt.