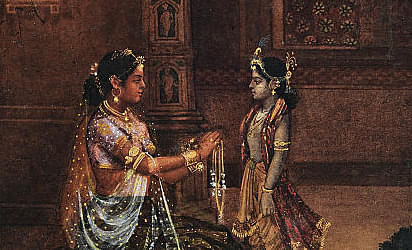 In this week’s Kāvya column, a snippet of two greats of Sanskrit poetry– Līlāśuka and Jayadeva.

“Mother!” “What is it, Krishna?” “Give me a cup” “Why?” “I want to drink milk” “No drinking milk now.” “Then when?” “At night” “What is night?” “When it’s dark” Krishna then closed his eyes and demanded “It’s now night. Give it now, give me, give!” while pulling at Yashoda’s garment. May this Krishna nourish us all. (Līlāśuka’s śrīkṛṣṇakarṇāmṛtaṁ)

After being admonished by a few readers for my partisanship towards Śiva in a previous column, this column now rotates the spotlight to India’s most loved deity, Krishna. However, our focus this week is only on two master poets — Līlāśuka and Jayadeva. Their popularity is such that they have inspired hundreds of imitations of their works. And their quality is such that no imitation has even come close to challenging the original. Līlaśuka casts his spell purely through meaning, artha; Jayadeva on the other hand, works through sound, Śabda. Perhaps the route of Jayadeva has been best described by Eliot:

“the feeling for syllable and rhythm, penetrating far below the conscious levels of thought and feeling, invigorating every word; sinking to the most primitive and forgotten, returning to the origin and bringing something back, seeking the beginning and the end.”

Jayadeva is the only poet in Sanskrit literature to evolve a completely new poetic form on his own. And what a form it is! Listener’s delight and translators despair. Frost once said that poetry is what gets lost in translation. And by this measure the Gīta Govinda is 100% poetry; hardly any charm remains when a translation is attempted. Gīta Govinda took Indian art by storm. Music, dance, painting, sculpture — nothing could escape the field of Jayadeva. And all this started happening even within Jayadeva’s own century! A very rare occurrence for those days when information travelled only as quick as carts. Gīta Govinda is the gone-viral kāvya of medieval times. There was even a period in history where Vaiṣhnava art by default implied imagery from Gīta Govinda. Even our national anthem ultimately owes its tune to the influence of Gīta Govinda! (More on this later).

Gīta Govinda, however, is somewhat lackluster in the literary department — the figures of speech and phrase constructions are dull and cliched. That really is Līlāśuka’s forte. Not much is known with clarity about Līlāśuka’s life. However, the commentators have a colourful story about him:

Every night, a man called Bilvamangala would visit a prostitute Cīntāmaṇi who lived across the bank of the river, Krishna. One stormy night, Bilvamangala arrived at one bank, only to find the boat missing. His desire for the prostitute was such that he managed to ferry himself by clinging onto a floating dead corpse. But to his disappointment, the prostitute’s door was bolted from within! Not one to be beaten, Bilvamangala grabbed a snake clinging to the walls of the house and hoisted himself inside.

The prostitute, Cīntāmaṇi, who had witnessed all this, chided him disgustedly “If only you had been attached to God in the same way you are attached to me, your life would have been better”. Hearing this, a great transformation came about Bilvamangala. The dissolute man then renounced the world and became known as Līlāśuka. His Śrīkṛṣṇakarṇāmṛtaṁ begins with a verse starting with the words “चिन्तामणिः जयतु ” “Victory to Cintāmaṇi”— an allusion to the prostitute in a verse dedicated to Krishna.

Lets take a look at a few verses from Līlāśuka—

“Once upon a time there was Rāma” “hmmm” “Sītā was his wife” “hmmm” “In the forest, Rāvana kidnapped Sīta” The sleepy Krishna listening to his bed time story, Suddenly shouted— “Lakshmaṇa, where is my bow! my bow! my bow!” May his alarmed words protect you.

How skillfully Līlaśuka develops the narrative of Krishna being told a bedtime story, complete with interjecting “hmms”! There is yet another verse in which the sleeping Krishna fancies himself as Vishnu:

“Shambhu, Welcome! Please sit down” “Brahma! Come here to the left” “Subrahmanya! Is all well?” “Indra! Everything good?” “Kubera! You haven’t been around” Hearing this prattle of the sleeping Krishna, Yashoda thought “What all this boy says!” And chanted dhoo-dhoo to ward off evil spirits. May it protect you too.

Compacting conversations into tightly knit verses is not easy; and in the whole of Sanskrit literature, there is no one who’s done it as admirably as Līlāśuka. Another major thread that runs through the work is Krishna’s ability to charm and captivate the Gopikas.

A milkmaid set out one day Intent on selling her produce. But her thoughts were with Krishna; On account of this infatuation, Her street cry became: “Govinda! Damodara! Madhava!”

While Līlāśuka largely focuses on Krishna’s childhood, the Gīta Govinda explores the different moods in the love between Radha and Krishna. The work is organized into sections of 8 couplets Aṣṭapadis. The Gīta Govinda really has to be heard to experienced. I leave you with Balamuralikrishna’s rendition of the 6th Aṣṭapadi. We shall revisit Jayadeva in greater detail in the next column and gain a better appreciation of the Gīta Govinda.