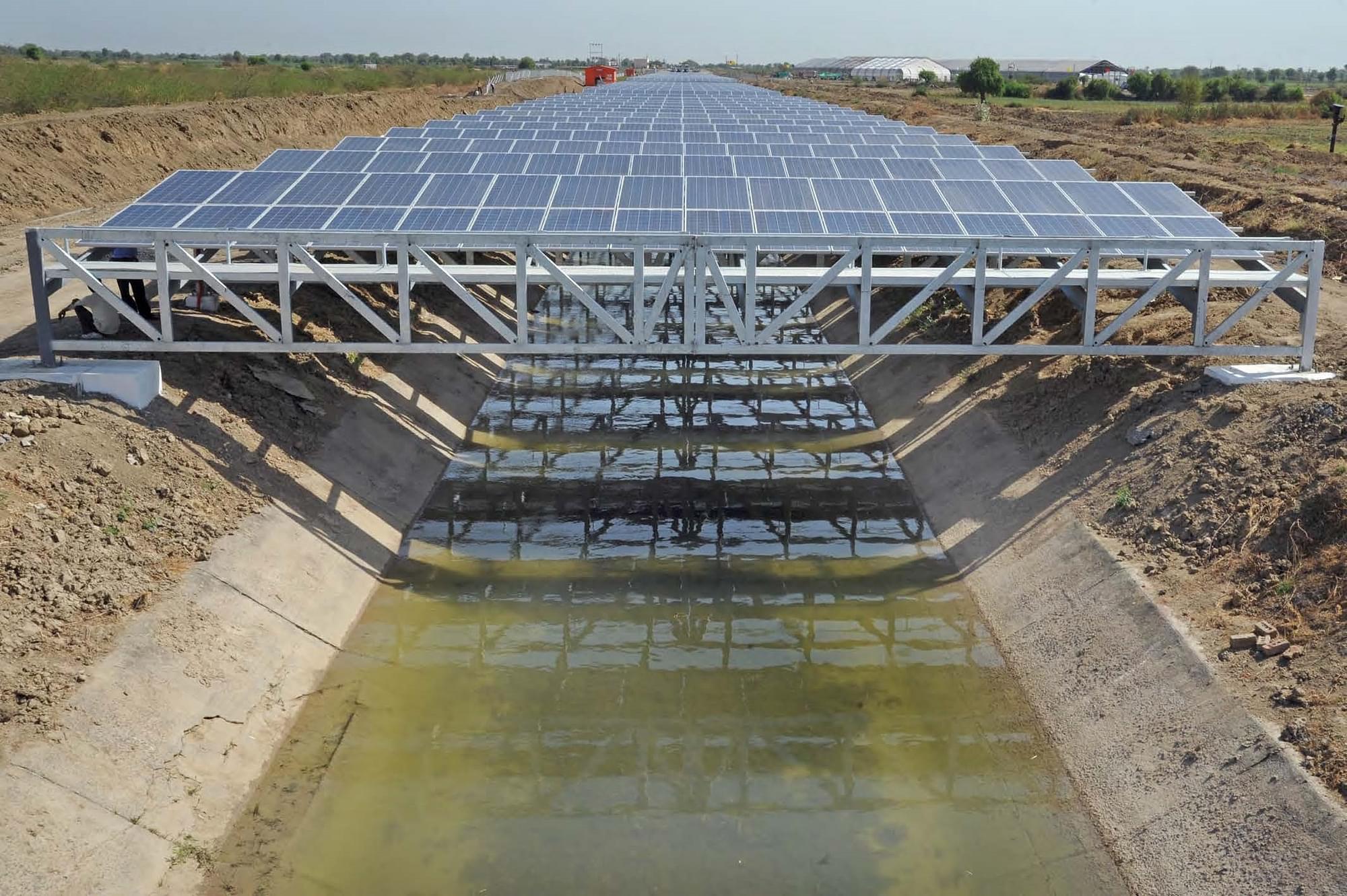 The author lists out six ideas that will help us realize the potential for generating solar power, other than from solar parks

“The investment of $ 20 billion will be made through the next ten years. If we have stable scale and if land is available to us, manufacturing of solar equipment will also make sense,” said Masayoshi Son, chairman and CEO, SoftBank Corp.

The potential for generating solar power, other than from solar parks, is huge. Here are some ideas.

One, during a 2013 visit to the Vivekananda Kendra School in Tawang, girls were unable to study in the evening and hostels, pitch dark due to a power blackout. Was told of frequent power cuts.

Like this school there must be thousands of schools across the country especially residential ones. Tawang gets sun for 7-8 months in a year, schools in the plains much more.

Currently, Central Government gives a subsidy of 15% of the benchmark cost (30% till Budget 2015). Amongst the States, Chhattisgarh gives subsidy and Tamil Nadu a generation based incentive.

The April 2015 Reserve Bank of India circular  on Priority Sector Lending (PSL) for Renewal Energy has bank loans of up to Rs 15 crores for borrowers and Rs 10 lakhs for individual households.

In order to promote the use of solar energy in schools situated in hilly, naxal affected and backward areas the Central Government must give a capex subsidy of 50%/effective interest rate of 5%. Also, RBI to include such loans as PSL.

Two, the Indo-Pakistan border in Rajasthan is floodlit all night. During a conversation with a BSF Jawan (2013) he cribbed about power cuts meaning they had to ferry diesel to keep the lights on. He wondered why the Government did not use solar power? A Shillong Times report referred to a similar problem in Meghalaya where smuggling of boulders to Bangladesh takes place at night.

In Rajasthan, waste-land could be used or the 445 km Indira Gandhi Canal be covered with PV panels in parts. Power would be transferred to the State grid. If power is stored in batteries it will increase the cost.

Using Canal option prevents evaporation of water and “solar panels shall produce 15% extra power as compared to land installations as the water flowing under the panels keeps them relatively cool.”

According to S P Baral Director (Strategy and Business Development) of  Crux Power, Bhubaneswar “canal option roughly cost about 1.5 times due to the cost of mounting the structure, civil engineering and other safety measures. Also, moisture might affect the life of the panel and this effort requires concerned Ministries to work in tandem when objectives are different”. Lastly “regular maintenance of solar PV in dust prone areas, i.e. Rajasthan, needs to be done if the efficiency of solar PV is not to go down.” Read about pros and cons of canal solar PV  here

Pioneers of canal top solar PV, Gujarat’s second 10 MW project is on the 3.6 km of the Vadodara branch the Sardar Sarovar project canal. It was commissioned in November 2014 at a cost of $ 18.3 million and has nearly 35,000 panels. Power is fed into the State grid and to operate pumping stations in the canal.

Industry sources state that floodlighting of border is energy and capital intensive. Given length of India’s borders Government must seriously evaluate usage of solar power in border areas.

Three, did you know that, “on an average, the country’s cell tower network consumes over 11 billion kWh annually and is likely to increase up to 17 billion kWh by 2016? In the absence of grid or intermittent power supply where grid is available, these cell phone towers often require diesel to run the operations. This sector consumes around 3 billion liters of diesel annually.”

According to S Baral, “1 litre of diesel generates app 3.5 units of power. If you add capex cost, per unit cost crosses Rs 20/ per unit. Conversely, cost of solar is app Rs 8-9/ per unit”.

A July 2013 study by ‘shows a saving per kWh of Rs 10/ in operation cost alone at diesel price of Rs 52.25 per litre. With every Rs 10/ per litre increase in price of diesel, the solar photovoltaic payback period reduces by app 2.5 years’. Current diesel price is about Rs 57/ per litre and crude at $ 56. With deregulation of price increase in crude will be passed on.

A Hybrid Solar system is an option. Assuming that there are two operators for a tower, the area required is 6 by 6 metres to generate 8KW. A 600 Ah battery would give four hours of backup. Industry sources indicate a pay-back period of four years.

Use of hybrid solar is yet to take off in a big way. Note there are app 510,000 towers today so the potential is huge. Can RBI include bank loans to telecom tower companies as PSL? It would reduce cost of funding and incentivise telecoms to aggressively go solar.

Since Bharti is a partner in the Softbank JV it can use insights derived as a telecom company to provide customized workable solutions to tower companies. Solar products manufactured by JV can be exported to AIRTEL Africa.

Four, solar panels for personal use should be marketed like TV Dish Antennas. A villager in Bastar’s Narainpur district asked the author (2012), what use is the antennae when there is no power?

Today you see TV antennas in the smallest of homes across Bharat. Opportunity exists!

Five, the Government should make it mandatory for new multi-storeyed residential/commercial buildings/gated communities/MALLS in four metros, Gurgaon, Bangalore, Hyderabad, Pune, Thane, NOIDA, Ahmedabad to have rooftop solar such that common lighting, hot water and minimal light in each unit is provided for. The Haryana government amongst others have made a beginning.

According to Consulting firm Bridge To India, Patna’s rooftop space has the potential to solar capacity of 759MW.

The government has just launched an Indian Renewable Energy Development Agency loan scheme for rooftop solar projects in the country. It can be availed by project aggregators, developers. To know details go here

Details of the rooftop scheme needs to be publicized big time. Outsourcing the communication and approval of subsidy to a customer friendly private sector intermediary  would increase possibility of success.

Six, most new commercial buildings have glass interiors. According to S Baral, ‘at an additional cost of app 25-30% glass panels could be replaced by Building Integrated Photovoltaic modules’. The building would be billed based on total units consumed less power contribution to grid.

Buzz word for solar industry should be ‘Go to Consumer site’, ‘Enlighten Consumer on benefits of Solar Power’ for e.g. Tata Power Solar set up a 2MW rooftop solar system for Murugan Textiles – the first power loom producer to use 100% renewal energy.

Clearly there is a huge untapped market for solar products. Solar Power should be marketed like an FMCG product to create a huge national market.

Most of the above ideas do not require large tracts of agricultural land and power purchase agreements with State Electricity Boards who are reeling under huge losses.

These are some ideas on the untapped potential for solar power which need to be explored and supported in all seriousness.

India’s solar energy plan should include baby steps as outlined above and solar parks. This approach will generate employment at the grassroots level and provide economies of scale i.e. essential for manufacture of solar equipment in India.

Sceptics have expressed doubts over the government’s ambitious target of installing 100,000 MW of solar power capacity (20k MW from solar parks, 40k MW each from roof-top and distributed generation projects) by 2022.

Big change requires us to think big, out the box and focus on implementation.