Know the real Narendra Modi -The making of a leader 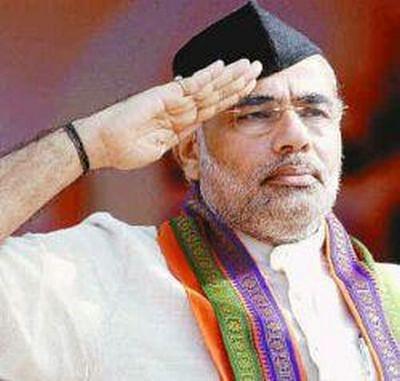 The 3rd of six children Narendra Modi was born on 17th September 1950 at ‘Modi Ol’ in Vadnagar Gujarat. His eldest brother worked for the Public Health Department. The second eldest became a polytechnic engineer and joined a small factory. His younger siblings succeeded moderately in education and joined the state government at junior positions.

Narendra belonged to a poor lower middle class family living in a very modest house of mud and bricks in a narrow lane in an old part of the city. This forty by twelve feet house consisted of 3 rooms. The front room served as a living space and bedroom with a small curtain in a corner providing space for a makeshift bath. The room behind it serves as the kitchen and pooja room with the last room serving as a storage space for cow dung cakes, firewood etc. An oil lamp had to be lit during the entire day to provide illumination as the house lacked windows owing to the fact it was hemmed in on three sides by other houses. The only opening was a door which led to a lane so narrow that a parked bicycle would block pedestrians. There was no toilet and the family had to relieve themselves in the fields. The male members went to the lake to wash and water for cooking and drinking came from a nearby well. Narendra never had more than two pairs of clothes, which made him ensure that they were clean, pressed and presentable. Adept at cooking he would cook for the family when his mother was ill. In short the Modi family struggle is the story of every ordinary lower middle class family, no privileges, no silver spoon. The experience made them strong but kept them humble.

Affectionately known as ND, he was extremely popular and had a big friend circle. Narendra was an average student but enjoyed his education and school. He spent most of his time reading in the school library and perhaps this is where works of Swami Vivekananda inspired him. During lunch break he would rush to help his father in his tea stall. Free time was spent playing with mates under a banyan tree.

A strong willed lad he would not let a mere class monitor correct his homework and would submit his notes only to the teacher. Even the teacher bowed before his adamant stand. Dr. Sudhir Joshi a physician and an old classmate remembers Narendra as a fearless, frank and outspoken person never afraid to air his views. His argumentative skills and powers of persuasions were very evident from the very beginning when he spoke and resolved by talking over matter with the school principal. Even his teacher PG Patel remembers him as someone with a clear sense of wrong and right and a very clear thought process.

From school days Narendra showed glimpses of management skills. His school required a compound wall but the school did not have enough funds. Narendra organised a play to raise funds getting a lot of support from the school teachers, students and community folks. It was a daring thing to do for a youngster but he succeeded in this self appointed task and acquired more funds that required. He was hardly sixteen or seventeen years old. As a ninth class student he organised a food stall on the occasion of ‘Janmashtami’ and the entire proceeds of the sale went to the relief fund for those affected by floods.

In the middle of Vadnagar, a very ancient town (mentioned in the Skanda Purana), is a vast oval lake ‘Sharmista’. In the middle of the lake on a rocky outcrop is a small shrine. It was customary to change the saffron flag atop the shrine on auspicious days. On one particular occasion it had rained heavily and the lake was full beyond capacity. The lake is infested with crocodiles that were swimming about after loosing their rocky perch around the banks owing to the flooding. Swimming over to the rocky outcrop would not only be daring but suicidal under the circumstances. But twelve year old Narendra volunteered and with two other mates Mahendra and Bachu swam over to the shrine and with great reverence planted the saffron pennant atop the shrine. On return to the shore he was received as a great hero of the people.

Around the time Narendra swam in the crocodile infested waters and became a town hero, a renowned ‘Sanyasi’ visited Vadnagar who went daily from house to house seeking alms. Once he happened to visit the Modi household and looked at the available horoscopes of elder brother Sombhai and Narendra. The Sage said Sombhai would have an ordinary life and would even go to jail. And for Narendra the great Sage declared that if he went into politics he would be as powerful as an emperor else he would become a ‘sanyasi’ and eventually become a Shankracharya. Many years later Sombhai did go to jail for leading an agitation and now as always is an employee of the Gujarat Public Health Department. India now waits with baited breath for the second prediction to come true.

Bibliography: Narendra Modi, The Architect Of A Modern State by MV Kamath and Kalinid Randeri