Celebrating 125 Years Of Ganeshotsav: Mumbai And Pune Gear Up For A 10-day Fervour 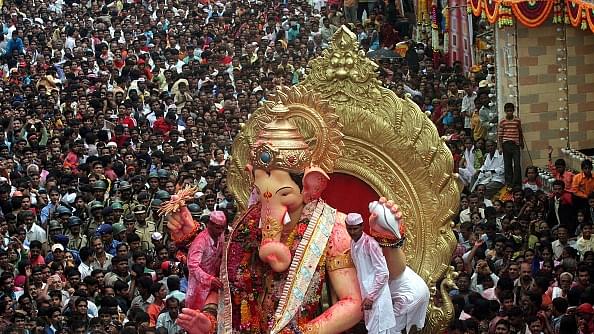 Ubiquitous processions of people with saffron headgear playing dhol tasha and Lord Ganesh idols making their way to countless pandals dot the roads of every town and city in Maharashtra, as the Ganeshotsav 2017 starts on 25 August.

Thousands of pandals come up in Mumbai and Pune every year, the two cities where the celebrations are the loudest. Over time, the tradition spread across the country. Pandals set up with money collected from small neighbourhoods or shops or in building societies can now be seen in all states adjoining Maharashtra.

Worshipping Lord Ganesh is not new in India. Centuries old Ganesh idols are present in several museums and in temples across the country. When Naxals attempted to destroy the ninth century Nagvanshi era Dholkal Ganesh in Bastar in January 2017, it was a reminder of how the god of auspicious beginnings was omnipresent in our ancient civilisation. The Marathas used to worship Lord Ganesh prominently as per several historical accounts. Italian philologist Angelo de Gubernatis has recorded processions in Mumbai taking Ganesh idols home in the late nineteenth century.

But Ganeshotsav did not become a sarvjanik or a community festival until 1892.

Bhausaheb Laxman Javale of Pune, commonly referred to as Bhau Rangari, started the tradition of a community festival in 1892. This was a small scale event designed to provide a cover for freedom fighters to meet at one place escaping the British gaze. Using paper pulp, a Ganesh idol slaying a demon was created by Javale. This three-feet idol now sits in a temple in Budhawar Peth in Pune. It is painted and maintained every year, but it has been intact since it was first worshipped in 1892.

This was the time when two stalwarts of Pune - Gopalkrishna Gokhale and Bal Gangadhar Tilak - were shaping the nascent Indian National Congress, an umbrella organisation then, in their own ways. Tilak focused on linking the freedom struggle with symbols and themes from the Indian heritage, and profusely praised the efforts of Javale in his newspaper Kesari.

In 1870s, the British had blocked large public assemblies for fear of popular uprising. Tilak saw great potential in using Ganeshotsav as a lever for community resurgence and a vehicle to mobilise Indians against the British. A religious festival offered a great cover for such mobilisation without fear of harassment. Lord Ganesh was already worshipped across the country, especially in areas with Maharashtrian population in Maharashtra, Madhya Pradesh, Gujarat, and Goa. Taking the festival out of homes had a great appeal with his geographic reach.

Tilak installed his own idol in 1894, following up next year with public celebrations of Chhatrapati Shivaji Jayanti as well. In these two events, Tilak lent scale to the freedom movement, taking the philosophies and messages discussed in the intellectual Indian National Congress lobbies to public at large.

The Ganeshotsav was designed to run for 10 days with public participation in the form of dances, skits, and plays. These 10 days allowed the build-up of anti-British sentiment using creative means and relatively easy movement of freedom fighters for planning specific events and protests. The public participation and cultural events continue to date with children, music groups, and orchestras getting a chance across the country to showcase their talent to their communities. From the promises of not surrendering to marauding foreigners to the ‘aashiq surrender hua’ assertion – only the nature of cultural motifs has changed.

With time, the marquee pandals expanded too in Mumbai and Pune. Dagduseth Halwai, one of the revolutionaries who assembled in Javale’s house in the 1892 festival, set up a Ganeshotsav himself, now popularly known as the Shrimant Dagduseth Halwai Ganpati, also located in Budhawar Peth, Pune. The first sarvajanik Ganesh mandal in Mumbai came up in the Keshavi Naik chawl in Girgaum where common Indians working in cotton textile mills lived without much comfort and joy in their tough manual-labouring lives.

Over the years, both Mumbai and Pune got specific mandals which are considered first among equals. The idols in Mumbai are much bigger and display much grander than those in Pune. One simple reason is the depth of water bodies used for visarjan – Mumbai has the natural advantage of being a coastal city.

In Pune, the five maanache Ganpati lead the visarjan processions, each carrying its own historical origination beliefs. The Kasba Ganpati of Kasba Peth is believed to be an idol worshipped by Jijabai, the mother of Chhatrapati Shivaji. The Tambdi Jogeshwari Ganpati in Budhwar Peth is considered the gram devata of Pune, a swayambhu or self-emerging idol, which appeared almost six centuries ago. The Guruji Talim Ganpati of Laxmi Road is symbolic of peace and communal harmony. The Tulshibag Ganpati of Tulshibag was the first large idol installed in Pune. The Kesari Wada Ganpati of Gaikwad Wada recounts the life of Lokmanya Tilak and is the fifth in the visarjan procession.

This is the hundred and twenty-fifth year of the first sarvajanik Ganeshotsav in Pune. The Pune Municipal Corporation is all geared up to mark the special occasion. A website www.morya125.in has been set up to provide information on all the special events and the Twitter hashtag #Morya125 is spreading the message on social media. The most interesting event will be on Sunday, 27 August when Pune will make an attempt to create a Guinness World Record for the largest dhol ensemble. Marking its hundred and twenty-fifth anniversary, the Bhau Rangari temple trust is displaying the weapons used by the revolutionaries who gathered for the 1892 inaugural meeting at Javale’s house.

The fervour of the Ganesh Chaturthi, the day Lord Ganesh makes his way to the homes and pandals across the country, will soon give way to the visarjan processions chanting Ganpati Bappa Morya, pudhchya varshi laukar ya /agle baras tu jaldi aa (come soon next year). But for Pune and Mumbai, Ganesh is our own God – he stays in our collective conscience year in and year out.