Acid Attacks: Where Does India Stand And What Is The Way Forward? 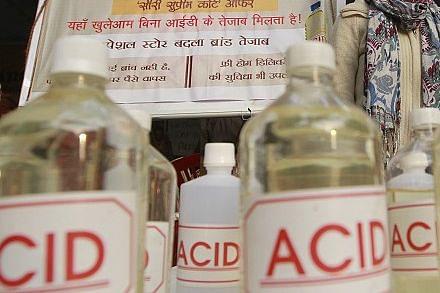 There is a restriction on sale of acid through retail channels by treating it as poison.

Earlier this month, acid was thrown on the face of a young girl in West Bengal’s Murshidabad district by her neighbour; in Sujanganj area of Uttar Pradesh, a man reportedly attacked a woman with acid after she resisted a rape attempt.

Acid attacks are a manifestation of extreme violence that often leave its victims with deep physical and psychological scars. The repercussions are long-lasting especially due to the alienation of victims by their families or society at large.

India recorded 283 incidents of acid attacks (attempts and attacks) in 2016, with West Bengal accounting for the largest share among states, followed by Uttar Pradesh. The actual numbers might be much higher given the likelihood of under-reporting, especially for crimes of this nature where the perpetrators are often known to the victims and their families.

Similar to Bangladesh, around 85 per cent of the victims in India are females and most of them are between 14-35 years of age. A key difference, however, is that the majority of incidents of acid violence in India occur in public places. The most common cause for these attacks is an attempt by a spurned lover to seek “revenge” upon rejection of a marriage proposal or sexual advances. Underlying this, of course, is a mindset of male entitlement fuelled by patriarchy.

It was only in 2013 that India’s Supreme Court — acting on a petition filed by a survivor— recognised acid attacks as a separate offence, punishable up to 10 years in prison. Moreover, the Apex Court asked the Centre and States to make the offence non-bailable.

Stringent norms were also put in place for restricting the sale of acid through retail channels by treating it as poison under the Poison Act, 1919. The sale of acid to minors was also prohibited.

Further, in 2015, the Supreme Court directed private hospitals to provide treatment to acid attack survivors, including specialised surgeries, free of cost. States and union territories were also asked to treat survivors of acid-related violence as disabled persons so that they can be eligible for the benefits of reservation in government jobs as well as social welfare programmes.

During the same year, a one-time grant of Rs 200 crore was released to states and union territories for compensating acid attack survivors under the Central Victim Compensation Fund. Moreover, it was decided that an additional Rs 1 lakh compensation will be provided to the victims under the Prime Minister’s National Relief Fund. Last year, a pan-India scheme for providing a defined minimum level of compensation to survivors was also announced.

Beyond legal and policy provisions, several positive developments have taken place at the societal level as well. For instance, the Sheroes Hangout Café was set up by acid attack survivors. This endeavour has helped to send out a strong message about the need for eliminating social stigma and focusing on the rehabilitation of victims. ‘Make Love, Not Scars’, a charity for providing financial, legal and psycho-social support to survivors, has also been established.

Several challenges, however, still remain. While laws exist, ensuring that victims actually get justice is far from straightforward. Of the attacks registered between 2010 and 2014, only 60 per cent resulted in filing of charge sheets. Moreover, approximately 81 per cent of the accused could obtain bail, while nearly 49 per cent are absconding.

Cases can take anywhere between 5-10 years to reach a logical conclusion. This defeats the purpose of having strong laws in place because they cannot serve as a deterrent unless speedy justice is ensured. Special courts for crimes against women and witness protection must therefore be prioritised.

Similarly, policies pertaining to the provision of compensation to acid attack survivors need to be monitored closely to ensure that the funds are reaching intended recipients in a timely manner. The norms with respect to the sale of acid also need to be enforced more stringently as it continues to be available relatively easily and cheaply in many parts of the country.

There are lessons that India can learn from other countries on curbing the menace of acid attacks. Bangladesh, for instance, introduced the Acid Crime Control Act in 2002, which imposes a death penalty for those who are found to be guilty. It also mandates purchasers of acid to procure a license. The rigorous implementation of these two laws has been successful in reducing acid violence in the country by 80 per cent.

Further, emphasis needs to be placed on the social reintegration of victims through skilling, jobs and provision of psycho-social support.

Finally, while addressing the issue of male entitlement is extremely complex given the deep-rooted patriarchal mindset, efforts should be made to create awareness by sensitizing students in schools and universities.

Women should also be encouraged to discuss the issue freely with their families and friends, without shame or embarrassment, as well as report any potential threat they sense to the relevant authorities, without the fear of negative consequences, so that timely preventive action can be taken.