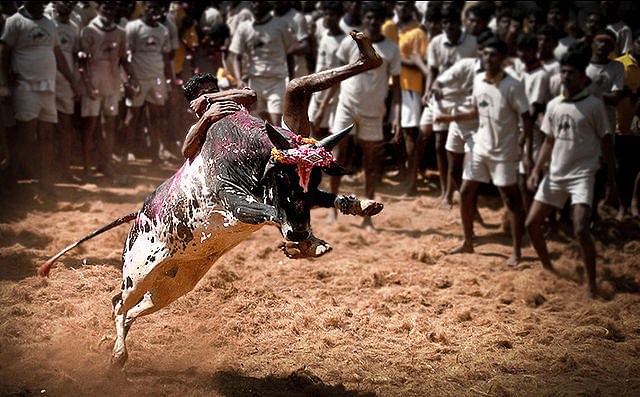 If sports such as Jallikattu were to go out of practise there would be fewer incentives for breeding healthy bulls.

If sports such as Jallikattu were to go out of practise there would be fewer incentives for breeding healthy bulls. The Jallikattu tradition observed in Tamil Nadu goes back at-least two millenia if not three. Rock paintings depicting bull chasing have been found and dated  to be between 2000 B.C to 1500 B.C. The sport in its recent form involves a few big events across southern Tamil Nadu (the one in Alanganallur being the most famous) during the Pongal/harvest festivities.

Bulls from across the region are let loose into an arena where men are challenged to chase and hold on to a bull’s hump. There are also prizes tied to the bulls horns which the men in the arena attempt to untie and claim for themselves.

The Supreme Court banned these meets in 2014 after animal rights activists had petitioned the court citing mishandling of bulls during such meets. The sudden ban on the sport has angered cattle rearing communities who are closely tied to the Jallikattu traditions in southern Tamil Nadu. With Pongal/harvest festival approaching in mid-January there has been considerable mobilisation in support of reviving Jallikattu. Even the union cabinet is reported to have discussed the issue of reviving the sport.

Balakumar Somu, an animals rights activist from Coimbatore, runs a website called Jallikattu.in and has been fighting for the removal of the ban against the sport.  His take on why the courts and government must encourage and not ban the tradition is given below:

Indian villages maintain stud bulls as part of the village commons – in the south these are also referred to as the temple bulls. These animals are fed by the entire village and are used for impregnating the village’s cows alone. Some of the villagers who can afford the expenses, (usually the village headmen) also bring up stud bulls. This is a highly economical set up – no fee is levied for studding. The stud bulls are changed (or exchanged with other villages) every three years in order to avoid in-breeding.

In order to honour those who bring up the stud bulls and to demonstrate the strength of the bulls annual sports of sorts are organised: one of these sports is jallikattu. This is not taming the bull as is often misunderstood. It is actually embracing the bulls. The men should embrace the speeding bull and hold on to it as long as he can. In Spanish bull fights the participating bulls are killed. But here in India the bulls become much celebrated beings of the village and the families.

The ban will lead to the destruction of local livestock breeds in the name of animal rights. If sports such as Jallikattu were to go out of practise there would be fewer incentives for breeding healthy bulls and all that would remain are semen-banks. Consequently these areas would lose their cattle breeding traditions; in effect destroying entire species across districts.

The Jallikattu belt of Tamil Nadu consists of 18 districts – a single large continuous area where you have thriving native breeds. Jallikattu has very important rules about not hurting the animals in the arena. You cannot hold their horns, You cannot hold or twist their tails. You cannot hang on to the neck of the bull and you should not hinder the legs of the bull by locking your legs to it. So all your strength is restricted only to holding onto the humps. There is no animal torture involved here at all. There have been instances where animals have been mishandled but existing animal rights laws can be invoked, new safeguards promoted to avoid such instances in the future.

The Jallikattu bull also serves as the stud bull of the village. If you ban Jallikattu where shall we leave the bulls? Go-shalas? In go-shalas they are required to be castrated.

So if you stop Jallikattu you will effectively destroy entire livestock breeds. The state of Tamil Nadu itself has six indigenous varieties. Of these Alampadi – one of the breeds has already become extinct. The others are also on the brink. If the Central Government does not support Jallikattu then other breeds will also go extinct soon.

Ultimately, the fate of the local livestock breeds depend on the government’s decision. If the government intervenes and lifts the ban on Jallikatttu then the local breeds will survive and flourish. Otherwise they risk becoming extinct.