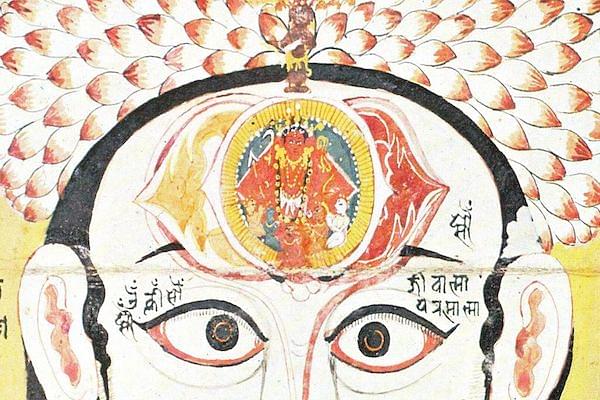 Children read through blindfolds even as astonished onlookers, who are initially sceptical, observe intently. The blind-folded children not only can read but also can “see” the colours of things shown to them. “Siddhis”— their mentors call them. The ability is because of “the third eye opening” or a fancier secular term “mid-brain activation”. Is this, then, the much sought scientific evidence for extra-sensory perception (ESP) and is this scientific proof of “Vedic Dharma”, as some Hindu scholars claim?

The history of parapsychology is replete with many such clinching ‘pieces of evidence’ of the supernatural. And a study of them reveals how to tread this path carefully.

The young Israeli stage performer burst forth upon the scientific community when he performed before scientific laboratories in the United Stated. The Stanford Research Institute (SRI) conducted a series of tests with Geller and a paper favouring the psychic powers, as the possible explanation for the results, was even published in “Nature”. Laser physicists Russel Targ and Harold Puthoff vigorously promoted Geller.

In 1973, he performed in the BBC studios under the watchful eyes of two scientists: mathematician John Taylor and biologist-author, Lyall Watson. Watson, trained under the legendary Desmond Morris, was extremely sympathetic to ESP. Both the scientists were highly impressed by Geller and were convinced of his psychic abilities. In 1974, at the University of London campus, in the office of physicist John Hasted, Geller did a set of tests in the presence of famous physicist David Bohm, author Arthur Koestler and science fiction writer Arthur C. Clarke. Prof Hasted was convinced that what they had observed was “consistent with the hypothesis that Geller could, by concentration, produce occasional and rather unpredictable pulses of electromotive force.” David Bohm was more cautious and said that he “could not assure that there were no tricks and no one there could.” He further pointed out to the “high state of excitement” of Geller, which made it “hard to keep one’s mind on what was happening.”

One person who constantly criticised Uri Geller as using “sleight of hand”, rather than psychic abilities, was the famous magician and free thinker James Randi. When James Randi, in a TV show unknown to Geller, created the perfect controlled condition, Uri Geller simply failed to perform. (The Tonight Show Starring Johnny Carson)

Earlier, when the famous “New Scientist” magazine asked Geller to do his psychic feats before a group that consisted of scientists, psychologists and stage magicians, Geller— who had initially agreed—later fidgeted with dates before completely scrapping the programme. Today, in the annals of parapsychology, Uri Geller is at best a “to-be-forgotten” phenomenon that happened to the field. James Randi was able to perceive trickery whereas professional scientists, who observed Uri Geller, simply saw what they wanted to see— given the fact that many of them were sympathetic to the “psi” phenomena.

This was the idea that a new idea or behavioural pattern, once it acquired a critical mass, would spread through unknown means to various groups in several parts of the world. The claim had its origin in a particular phenomenon observed by primatologists in Japan. In 1952, primatologists began providing Japanese macaques with sweet potatoes to keep them away from attacking local farms. One monkey among the group learned to wash the sweet potato in the stream nearby. Lyall Watson, biologist and author, in his 1979 best seller Lifetide claimed that once “a kind of critical mass” was obtained the behaviour “seems to have jumped natural barriers and to have appeared spontaneously on other islands.”

In 1985, this claim was verified by Elaine Myers, a writer who was sympathetic to Watson’s worldview. In her article, published in the magazine “In Context”, she reported that when she studied the original research she “did not find the same story that Lyall Watson told.” In the initial report “there was no mention of the group passing a critical threshold” and “the older monkeys remained steadfastly ignorant of the new behaviour” and “there was no mention of widespread sweet potato washing in other monkey troops.” Later, Michael Shermer pointed out that the “sudden” acquisition of the behaviour took ten years to spread. It was not at all sudden.

Rupert Sheldrake, a profoundly Christian new-age scientist, proposes a worldview that involves mind-body dualism and what he calls “a morphogenetic field.” Phantom limb is the phenomenon of patients undergoing amputation or sudden mutilation of a limb, still feeling the presence of the lost limb. Sheldrake performed an experiment to demonstrate that a phantom limb is something that exists in a non-physical way. In his experiment, an amputee made a movement of his phantom limb into a predetermined space. Another person made contact with this space, but he did not know whether that space, contained or not the phantom limb. Sheldrake claimed that with running a series of trials, after each trial, the person who made contact with the predetermined space supposedly improved his learning and started feeling the amputee’s phantom limb correctly.

Sheldrake claimed that his experiments showed statistically significant results. Sheldrake even included this experiment in his book Seven Experiments That Could Change The World (2002). However neuro-psychologists, Peter Brugger and Kirsten I. Taylor studying these “experiments” come to a more realistic conclusion that Sheldrake’s “experiments” suffer from, apart from other shortcomings, the fallacy of “misinterpretation of learning effects in guessing studies involving immediate feedback on response accuracy.”

Let Us Not Fall Prey To Simple Tricks And Pseudo-Science

In all the above “psychic” phenomena, what we see is that even learned scientists can be prisoners of their favoured worldview allowing biases. It was not an accident when conmen faked psychic powers; the quantum physicists fell prey to these simple tricks. Quantum physicists, for whom the weirdest spectacles formed their daily domain of expertise, the belief in psychic powers came naturally which, in turn, made the willing suspension of disbelief easier. The weirdness of quantum mechanics, nevertheless, does have its role in day to day life— from consciousness, perhaps, to quantum computers in the near future, but one does not need quantum mechanics to explain the parlour trick of reading a sealed letter by a stage magician. Hindus, too, with their wonderful worldviews and philosophies are vulnerable to such fallacies, and we have to be aware of this vulnerability. It is good to remember here that Carl Sagan, who appreciated the timescale and cosmologies in Hindu tradition, was also one of the strongest critics of the so-called psychic phenomena.

If that is the case with scientists, how about those who, even if they are scholars, are laymen when it comes to stage magic? Hence, in the case of a phenomenon like the so-called “third eye opening” or “mid-brain activation”, any claim in the public domain should be subjected to rigorous tests which should include stage magicians like P. C. Sorcar Jr. Already left-leaning rationalist groups in Kerala have been demonstrating on stages how children can read through the blindfold, as our visual system can amazingly adapt itself with a tiny amount of light, sneaking through the blindfold. Children can learn the art of peeping through the blindfold, even unconsciously. Usually, in the claims of supernatural “Occam’s Razor” is a very useful tool in eliminating fraud. Towards this end, Hindus should study Dr Abraham Kovoor, James Randi and Michael Shermer. In fact, the Hindutva side should develop their own James Randi.

That said, Indic philosophy does have a significant role in making science understand complex psychosomatic phenomena. Let us take the same case of the phantom limb. Dr Vilayanur Ramachandran starts the chapter on phantom limbs, quoting a passage from the Advaitic treatise Viveka Chudamani of Shankara that says not to identify one’s self with “the shadow cast by one’s body, or with its reflection, or with the body one sees in a dream,” etc. The reason why Ramachandran uses this quote becomes clear as he proceeds through the chapter. Through the experiments, he describes how he uncovers what happens in the brains of patients with phantoms which gives a “deeper message’” that one’s “own body is a phantom”, which the “brain has temporarily constructed purely for convenience” and that one’s “body image, despite all is appearance of durability, is an entirely transitory internal construct.” And Ramachandran uses the classical Advaitic technique of using one illusion to remove another illusion in alleviating the pain of the people with phantom limbs. He has developed a novel method of removing many instances of the phantom limbs through a mirror box. This method, developed by Ramachandran to treat phantom phenomenon, is rooted in the Indic theory of “body as a useful dynamic construct”, conceived by Maya.

So, in the approaches of Sheldrake and Ramachandran towards the phantom limb phenomenon, we have a lesson in how not to mix one’s worldview with science and how to use one’s philosophical tradition to stimulate ways of exploration in science. Hence, it is high time that we should look into the idea of Siddhis— the so-called supernatural powers that we are supposed to gain during our adventure into consciousness which we call “Sadhana”: perhaps we should not interpret them literally but understand them symbolically, and as maps towards a deep psychology.

Today, dharma needs serious, scholarly dialogue with science and its implications for society and environment. And those who are capable of such a dialogue do not have the luxury of getting side-tracked by simple tricks as “Siddhis”.

Lyall Watson, Lifetide: a biology of unconscious, Hodder and Stoughton, 1979

Michael Shermer, Why People Believe Weird Things: Pseudoscience, Superstition and other confusions of our time, Souvenir, 2007