How Buddhist Cultural Memes Were Appropriated By Christianity 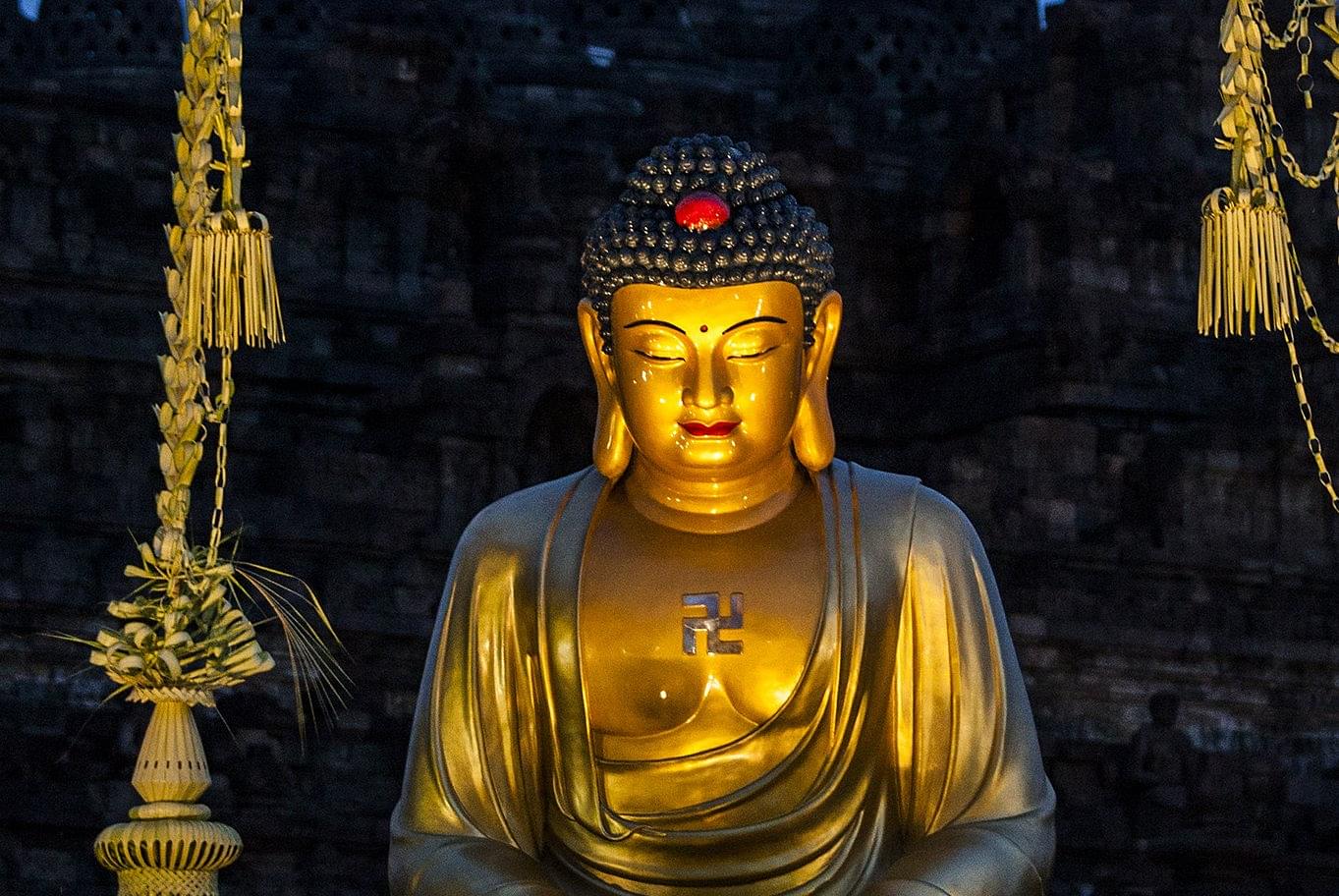 What is the exact relationship between the New Testament and ancient Indian texts on Buddhism? How much of the early gospels were inspired by the Buddhist texts?

Living in the global village as we do, it is good to trace the origins of iconic stories within the palimpsest of culture, especially those that hold power over the religious imagination of people and have the potential to create discord, in order we can all celebrate our shared heritage and look at each other in friendship. More often than not it will reveal the tangled nature of our collective memories.

We know that the Panchatantra stories traveled west from India and became Kalilah wa-Dimnah in Arabic (after the names of the two jackals Karataka and Damanaka). The name of the influential philosophical movement of Brethren of Purity (ikhwan al-safa) is itself traced to one of the Panchatantra stories. These stories and others from the katha-sarita-sagara were celebrated in the Arabian Nights and Sindbad. Scholars have also noted parallels between the Panchatantra and Aesop’s fables.

The origin of the legend of Barlaam and Josaphat, two of the most famous Christian saints of the Middle Ages is less widely known. This legend was so hugely popular that, from time to time, the Church announced that the relics of the two had appeared miraculously and were then installed with solemn ceremony. Barlaam and Josaphat found their way into the Roman Martyrology (27 November), and into the Greek calendar (26 August).

The legend tells how an Indian king persecutes his son, Josaphat, who astrologers have foretold, will establish the Christian Church. In due course, Josaphat meets the hermit Saint Barlaam and converts to Christianity. In the end, the prince’s father accepts the son’s conversion and retires to the desert to spend his last days with the old teacher.

Church scholars now acknowledge that Barlaam and Josaphat is a play on the names Bhagavan and Bodhisattva, and it is a reworking of the story of Buddha’s enlightenment. The original story was a Mahayana text that was translated into Arabic and European languages. Indeed, this legend should not startle us for St. Ann, St. Lucy, St. Denis and St. Brigid, represent pre-Christian deities Anna, Lucia, Dionysus and Brighid were similarly assimilated.

The echo of Indian stories in the early gospels and the influence of Vedanta and Buddhism on Gnosticism is also well accepted. In particular, the non-canonical Gospel of Thomas (which was discovered at Nag Hammadi in 1945) resonates with Indian ideas of spirituality.

The question of the possible relationship between the New Testament and Indian texts has a long history. The great philosopher Arthur Schopenhauer (1788-1860) went so far as to suggest that the canonical gospels had an Indian basis:

The New Testament … must be in some way traceable to an Indian source: its ethical system, its ascetic view of morality, its pessimism, and its Avatar, are all thoroughly Indian. It is its morality which places it in a position of such emphatic and essential antagonism to the Old Testament so that the story of the Fall is the only possible point of connection between the two.

The famed Indologist Max Müller also spoke of the connections:

That there are startling coincidences between Buddhism and Christianity cannot be denied, and it must likewise be admitted that Buddhism existed at least 400 years before Christianity. I go even further, and should feel extremely grateful if anybody would point out to me the historical channels through which Buddhism had influenced early Christianity.

This challenge was met by Rudolf Seydel, who showed that the originals of the events in the gospels are in the Lalitavistara Sutra, and he listed fifty-one parallels. Some of these are virginal conception by Mary and Maya, the annunciation by the angels, the star in the east, the tree that bends down to aid the mother, and the old sage who predicts the child’s future.

Further specific parallels are in Luke’s infancy narrative, in the story of the good thief, the story of the temptation of Jesus, the prediction of his death as in John 12.34, or the story of the aged Simeon in Luke 2:25 (the Buddhist Asita), or the passage John 7:38. Some see the parallels as no more than coincidences, although their details appear to go against that view. The scholar Albert J. Edmunds tried to find middle ground thus:

Each religion is independent in the main, but the younger one arose in such a hotbed of eclecticism that it probably borrowed a few legends and ideas from the older, which was quite accessible to it.

It is hard to take the view that the Buddhist texts borrowed from the Christian gospels since the life stories of the Buddha were translated into Chinese from Sanskrit as early as the eleventh year of the reign of Emperor Ming of the Eastern Han Dynasty (69 CE), and this is much prior to the time the gospels were written down.

Another important perspective is the operation of the Church and the Buddhist temple. Our evidence comes from the French Lazarist missionaries, Evariste Huc, and Joseph Gabet, who were amongst the first Westerners to visit Lhasa in the 1840s. Their travels through Asia and Tibet were chronicled in Huc’s book Souvenirs d’un voyage dans la Tartarie, le Thibet et la Chine pendant les années 1844, 1845 et 1846. Huc was astonished by the similarities between Buddhist and Catholic rituals:

The cross, the miter, the dalmatica, the cope, … , the service with double choirs, the psalmody, the exorcisms, the censer at suspended from five chains, the benedictions given by the Lamas by extending the right hand over the heads of the faithful, the chaplet, ecclesiastical celibacy, spiritual retirement, the worship of the saints, the fasts, the processions, the litanies, the holy water, all these are analogies between the Buddhists and ourselves.

Huc explained the similarities in the borrowings by the Tibetans from the West. But Tibetan Buddhism has an old history that connects it to the Buddhist monasteries of China and India with ancient prescriptions of ritual and worship, and it is implausible it borrowed the practices of a remote creed. It is more likely that the Tibetan and the Catholic rituals have a common source.

Just over twenty years ago, the Indian scholar Zacharias P. Thundy reviewed earlier scholarship and concluded that the gospels of Matthew and Luke have allusions to the Buddhist and Hindu traditions and the Indian influence on them is deep and pervasive.

More recently the Danish Sanskrit scholar Christian Lindtner has looked at the Greek versions of the gospels according to Matthew, Mark, Luke, and John and argued that much material in the gospels is a direct word-by-word, sentence-by-sentence translation of the corresponding Buddhist material.

He believes the original Sanskrit is from the mūla-sarvāstivāda-vinaya (MSV) and the saddharma-pundarīka-sūtra (SDP), also known as the Lotus Sūtra. The complete text of MSV was translated only in recent years and, therefore, this constitutes important new evidentiary material.

Lindtner argues that the Christian trinitas (trinity) corresponds to the triratna of Buddhism, which crowns a flag standard on the frieze sculptures at Sanchi that is a couple of hundred years before the birth of Christianity. He further claims that puns, symbols, codes, and parables were translated into the gospels, and there are obscure passages that only make sense in the Sanskrit original.

The parallels or borrowings do not reduce the differences between the practice of Christianity and Buddhism. Even if Christianity borrowed Buddhist stories, they were put to a quite different use.

i. Zacharias P. Thundy. Buddha and Christ: Nativity Stories and Indian Traditions (Studies in the History of Religions). Brill, 1993.