India Has A Choice: Do We Want Success Or Are We Happy Just Being Right? 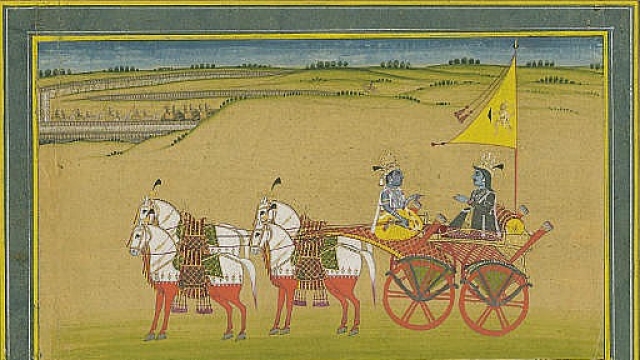 Indians, specially Hindus, have an enormous capacity to confuse themselves over everything, whether it is the despatch orders for Raghuram Rajan (a.k.a. Rexit), the opening up of foreign direct investment (FDI), or when dealing with Pakistan. You name it, we love breast-beating over it. We tie ourselves constantly in knots over good and evil, right and wrong, means and ends, dharma and adharma, forgetting basic lessons from the Rig Veda and the Bhagavad Gita.

For me, the essence of the Rig Veda is its gung-ho spirit, pursuit of success and victory over enemies. Almost all Rig Vedic hymns seek the help of gods to achieve success and victory. This is the spirit we lost during the Upanishadic period of deeper contemplation and metaphysical ruminations.

Even though there is doubt over when the Gita was composed, I suspect that it came towards the end of the Upanishadic period, when we had become effete and seized by self-doubt. The essence of the Gita – in my view at least - is that you cannot achieve peace without the ability and willingness to fight. When Arjuna was trying to weasel his way out of the Kurukshetra war, Sri Krishna stops him. He also tells us that when you do have to fight, give it all you have got. You must focus on winning, and not just fighting purely by the rules. If ethics leads you to defeat, or if a superior enemy has set the rules where you may fail, you must break the rules. This was the logic of Sri Krishna telling Arjuna to kill Karna when his chariot was stuck and the latter couldn’t fight back. It may sound like an ethical deficit in Sri Krishna, especially to our modern sensibilities, but once you are in a war, your dharma is to win. You can do the penance for it later. Adharma would have won if you had lost the war.

In one of the Karate Kid series (I think it is part III), Miyagi, the karate teacher, keeps telling his protégé that fighting isn’t good. But in the end, when he himself has to step in to put out the bad guys tormenting the heroine, he concludes with this line: “Fighting not good. But if you must fight, Win.”

This is what the Gita is about, and it is a pity we have to learn it from the West. We have become votaries of adharma by failing to seek success. Adharma wins if, in a moral issue, you fight not to win, but just for the principle of it.

So, the essential philosophical and practical question we must answer is this simple one: do we want success and victory or are we satisfied with righteousness, never mind if it leads to defeat? Remember, even victory by bad means gives you the opportunity to do the right thing afterwards; defeat only ensures that morality dies with you. Ends are as important as means, if not more important.

The history of the West and the Abrahamic religions is based on this simple truth; they used unfair and foul means to win (the colonisation of America, Australia, and Asia), but today one can argue that their ethical standards are better than ours.

Consider Winston Churchill’s four credos, as enunciated in his volumes on the Second World War. In Defeat - Defiance. In War - Resolution. In Victory - Magnanimity. In Peace - Goodwill.

Goodwill and magnanimity and righteousness are relevant only if you win, not if you lose. Dharma is possible only if you win, even if it means a (temporary) dalliance with adharma. War and peace, dharma and adharma are not polar opposites; they are two sides of the same coin.

In one line: you cannot be moral or ethical without first being in a position to do something about it by defeating those who stand in the way of morality.

Applying this principle to everyday battles is a bit tougher, but let’s do so anyway with the recent Raghuram Rajan affair. Surely, his departure was not achieved in the best possible way, but beyond tut-tutting over the mistake and ensuring we do not repeat it, we have to move on, as Vivek Dehejia eloquently points out here. There is no need to endlessly self-flagellate over Rexit. Did the Brits have any regrets over voting out Winston Churchill after World War II? Churchill provided brilliant leadership during the war, but the electorate clearly didn’t think twice about handing him defeat. They did not see this as being ungrateful for what he did for them during the war. They just felt they needed a different party in power to win the peace.

This may be the way to look at Rajan’s tenure too. He was needed in war-time, when the UPA’s economic mismanagement needed the world to see someone with credibility counter-balancing their follies. Rajan was the right man for the job. Do we need Rajan now? Not necessarily. India is on the world map and Modi is doing more than what a mere academic can do to sell the India story. Academia is the right place for academics. The government wants someone who vibes well with it, and it has a right to appoint that person. It has to learn the right lessons from the lack of grace shown to Rajan while getting him out the door.

Shit happens. It is not a reason for wallowing in it. Best to clean up and continue down a better path.

Let’s now get to the dirtier business of our ties with Pakistan. That we want peace is clear; that Pakistan wants peace – but only on its terms – is also clear. But peace is not about holding candles on the Wagah border. It is about building a strong defence, an effective counter-punch strategy, and not being squeamish about short-term wrongs that may get done in the process.

Did Indira Gandhi get squeamish about using subterfuge to win the Bangladesh war? No. She had no problem in using military power to achieve diplomatic ends. Contrast this with what her father did all through – from the ceasefire in Kashmir in 1948 to the China war. He thought words and good intentions were the route to peace, not strength and strategy. He used his strong dislike for war and violence to lead us to defeat in 1962. We may be doing the same with Pakistan today. Peace will not come from good intentions at all.

In war, what matters is resolution and clarity on strategy. Pakistan is clear on its strategy: death by a thousand cuts. It even Islamised itself to develop the spine to take on a bigger army. But are we sure what we want to do with Pakistan? We can have endless talks, but talks should be about achieving what we can’t on the battlefield. Not about living in denial about Pakistan’s true intentions. Our goal should be the defeat of Pakistan, its ideology, and ensure its dismemberment, till its capacity to bleed us is snuffed out. Our strategy should flow from these goals, and it is not unethical or adharma to use underhand tactics to achieve this. To fight Pakistan’s underhand tactics, we too must do the same even while talking peace and mouthing other endearing nonsense to confuse the enemy. If we can maintain a hypocritical smile on our faces while playing hardball covertly, we will win.

Or consider the opposition’s critique, and the swadeshi club’s angst, over Narendra Modi’s decision to open the FDI gate wider, including in defence. Is the country really selling its soul to foreigners by this act? Did China not do the same in the 1980s and become factory to the world? ‎While we need to do what is best for the domestic economy, consider what is actually being done now. In the first flush of liberalisation, we opened up to portfolio investments more than FDI in greenfield and brownfield areas. We opened up to hot money and volatility instead of inviting stable FDI. Now that we are correcting this imbalance, with even hot flows from Mauritius set to be grandfathered out of existence, we are again fretting about it. Our swadeshis are fuming even what we are doing the right thing.

Let’s explain this with reference to defence, where the nationalist argument is strongest. Does 100 percent ownership by foreign investors constitute a threat to our security or is it good for us? If we were importing equipment (which is usually the case with high-technology defence items), will foreign sellers stand by us if we are in a war, or will they stand by us when they are producing the same goods on our soil, under our government’s power? A foreign supplier of spares for, say, our aircraft can turn the screws by withholding spares during a conflict; the 100 percent FDI chap who is making in India cannot do this easily. In fact, since his entire investment is under our sovereign control, where our laws hold, he has a reason to cooperate even if his foreign owners tell him not to. Sure, we should also be developing domestic capabilities in defence, but FDI is a useful complement.

Modi is boosting FDI at the right strategic time, when China is more vulnerable than us. Consider what Ruchir Sharma, head of Emerging Markets and Chief Global Strategist at Morgan Stanley Investment Management, told The Economic Times in a recent interview: “If the Fed increases rates, there is a wall of money waiting to leave China. The amount of money that is circulating in China today is greater than that in the US even though the US economy is much larger….”.

If China is more vulnerable than us, isn’t it time for us to go for the kill on FDI? When the “wall of money” leaves China, should we not be ready to grab it? The timing is right, the strategy is right. The only thing wrong about it is our self-doubt.

China never plays softball when its core interests are concerned, as it is doing now to deny us an entry into the Nuclear Suppliers’ Group. It is using excuses to block us, when the majority opinion favours us. It is using its veto power to deny us an entry. Now consider what Nehru did when he was offered a Security Council seat instead of China under the Eisenhower administration. He was full of moral bluster, and refused to take China’s seat on principle. Now see how China is using our own follies against us.

Morally, we were right to not take advantage of China’s plight when it was internally weak. But we essentially pulled defeat when victory was offered on a platter.

If this is what defines us as a people we are doomed. In Robert Frost’s famous poem, “The Road Not Taken”, he concludes:

Two roads diverged in a wood, and I—

I took the one less traveled by,

And that has made all the difference.

This poem needs to be inverted for India. We took the road less taken, and ended up in the ditch. It has made all the difference between success and failure. We now need to take the road that is more promising.