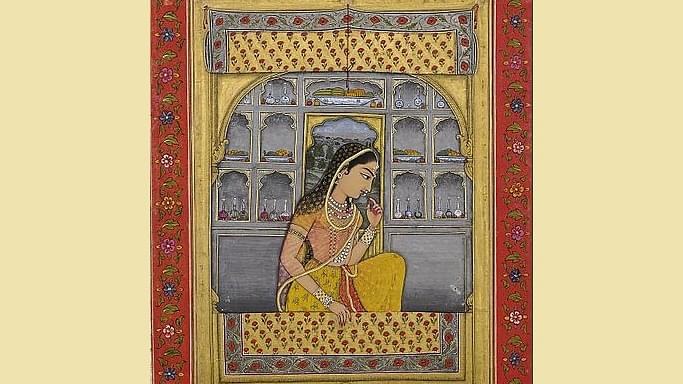 After Bajirao Mastani, director Sanjay Leela Bhansali is making another period drama film, Padmavati, this time about Rani Padmini, the queen of Chittorgarh, and Alauddin Khilji, the ruler of Delhi. According to media reports, the film will feature a love story between Padmini and Khilji.

The popular story says that when Khilji attacked Chittor, he fell for Padmini on seeing her reflection in the mirror. This story was woven by a well-known Indian poet, Malik Muhammad Jayasi, in 1540 AD, and finds echo in Jawaharlal Nehru's Discovery of India as well.

Jayasi’s poem about Padmini and Khilji, however, is not accurate. Historians have, in fact, come up with possible scenarios for what could have actually happened.

According to Jayasi’s poem Padmavat, Rani Padmavati of Chittor was the wife of Raja Ratansen (a name invented by Jayasi with no reference in Mewar history) of Chittor during the reign of Allauddin Khilji. The correct name of Chittor's then ruler was Rawal Ratan Singh, the thirty-fourth descendant of Bappa Rawal.

There were many talented artists in the court of Ratansen, one of whom was a musician named Raghava Chetan. He was a sorcerer who used his magical powers to target rivals. Once, he was caught red-handed while trying to invoke evil spirits, after which Ratansen banished Raghava from the kingdom after blackening his face. Raghava ran away to Delhi and decided to take revenge by provoking Khilji to attack Chittor.

Raghava knew of a forest near Delhi where Khilji went hunting. One day, he played his flute while Khilji was out hunting. The alluring notes emanating from his flute attracted the attention of Khilji, who then asked his soldiers to fetch the flute player. Thus, Raghava was taken to Khilji's court.

After reaching Delhi, Raghava told Khilji about the unparalleled beauty of Rani Padmini. That prompted Khilji to attack Chittor, but he found the fort to be heavily defended. So he laid siege to the fort and forced Ratansen to negotiate with him.

Desperate to capture the beautiful Padmini, Khilji sent a word to Ratansen about him wanting to meet her. The Raja asked Padmini, who flatly refused. However, on being persuaded by her beleaguered husband, Rani Padmini agreed to let Khilji see her in the mirror.

Next, Khilji entered the fort with a group of select warriors who had observed the fort's defences on their way to the palace. On seeing Padmini in the mirror, Khilji decided that she must be his.

While returning to his camp, Khilji deceitfully kidnapped Ratansen and took him as prisoner. Thereafter, he informed the Rajput Sardars that Padmini should be handed over to him if they wanted to see their king alive.

The Rajput generals, led by two gutsy warriors, Gora and Badal, who were related to Padmini, decided to beat Khilji at his game. They sent out a word that Padmini would be handed over the next morning.

At the crack of dawn, 150 palanquins (in which royal ladies were carried in medieval times) left the fort and made their way to Khilji's camp. The palanquins stopped before a tent where King Ratansen was held prisoner. To his surprise, armed Rajputs jumped out from the palanquins, freed Ratansen and galloped away to Chittor, riding the horses grabbed from Khilji's stable.

Khilji was furious. He ordered the army to storm Chittorgarh. However, the army could not break into the fort. Due to a prolonged siege, food supplies for the troops were running out. So Ratansen opened the fort gates, and Rajputs rode out to fight. They were overpowered, and achieved martyrdom. Rani Padmini and wives of thousands of warriors preferred jauhar (fire is lit, and women jump into the flames) over losing their honour to Khilji's army.

When Khilji entered the fort, all that he found were ashes of these brave women. Their sacrifice has been kept alive by Bards in their songs, where they praise women who preferred supreme sacrifice to dishonour.

When this author visited Chittorgarh Fort in 2008 and asked the guide about the veracity of the mirror story, he said locals did not believe in it.

Having learnt what Jayasi's poem says, let us now read what the Bhartiya Vidya Bhavan's book on Indian History says.

In January 1303, Khilji set out on his memorable campaign for the conquest of Chittor. He received strong resistance from the Rajputs under Rana Ratan Singh. The Rajputs offered heroic resistance for about seven months and then, after the women had perished in the flames of jauhar, the fort surrendered on August 26, 1303.

Whilst later writers like Abu-l Fazl, Haji-ud-Dabir (note these two authors use Padmini not as a name, but as a woman possessing special attributes) have accepted the story that the sole reason for invasion of Chittor was Khilji’s desire to get possession of Padmini, many modern writers are inclined to reject it altogether. They point out that the episode of Padmini was first mentioned by Malik Jayasi in 1540 A.D. in his poem Padmavat, which is a romantic tale rather than historical work. Further, the later day writers who reproduced the story with varying details, flourished long after the event, but their versions differed from one another on essential points.

In Padmavat, Jayasi wrote that Padmini was the daughter of Raja Gandharva Sen of Sri Lanka. The Lanka story has many contradictions.

Instead, there is a strong possibility that Padmini was a princess of Jaisalmer or of Sinhala, a village near Sojat in Pali district of Rajasthan. In the history of Rajasthan, there are many references which indicate that Rani Padmini was the eleventh wife of Rawal Ratan Singh among his fifteen wives, as polygamy was prevalent among Rajput rulers then. There is, however, no confirmation of her father being Rana Salsi Tanwar as written in the book The Kingdom of Mewar by Irmgard Meininger, a German author.

2) In Padmavat, there is a reference to a parrot who flew all the way from Sri Lanka to Chittor as a messenger to inform Raja Ratansen, or Rawal Ratan Singh, about the beauty of Padmini, daughter of the Sinhala ruler Gandharvasen, making Ratansen travel all the way to the Sinhala kingdom to win the hand of Padmini. This narrative lacks credibility since Lanka never had a king by that name.

3) Jayasi wrote this poem almost 237 years after Khilji's attack on Chittor. The literature of that era is full of highly imaginative narratives, and poets were known to gleefully use metaphors, alliterations and imaginary personifications. There is also a reference in Padmavat to a sorcerer called Raghav Chetan, who is believed to have been personified as a parrot.

Amir Khusro, the court poet of Khilji, who accompanied him during the Chittor attack, did not write about Padmini, nor did he allude any episode to her in his book Twarikh-e-Allai. To be fair, it is possible that Khusro might not have wanted to further spoil the image of Khilji. So he ignored the reference to Padmini. "According to Prof Habib, there is a covert allusion to Padmini episode by Khusro in his Khazain-ul-Fatuh, where he mentions the Queen of Sheba."

Equally important is the fact that Col James Tod did not refer to Khilji's desire to capture the beautiful Padmini in his book The Annals and Antiquities of Rajasthan.

There are many instances in history when court poets and writers have followed the instructions of the ruling kings, and wrote histories accordingly. For instance, the book Ain-i-Akbari by Abul Fazal, where he was instructed not to write about Mehrunissa's -- later known as Nur Jahan, wife of Mughal King Jahangir -- first marriage with an Afghan Pathan. However, there is a mention of her in Tuzuk-e-Jahangari as his beloved, and how his father had cheated on him.

It would not be wrong to say that Jayasi's poem Padmavat is a figment of his poetic imagination. "It has also been argued that the invasion of Chittor was the natural expansionist policy of Khilji and no Padmini was need for his casus belli".

The story of Khilji watching Padmini’s reflection in a mirror, or in a well, as stated in Discovery of India by Pandit Nehru, could have been based on a latter-day interpolation by some local poets. It could also be a phoney myth popularised by some imaginative storytellers.

Having questioned the motive for Khilji's invasion of Chittor, "it should be remembered that Khilji's lust for a Hindu queen is proved by the known instances of Queen Kamala Devi of Gujarat and the daughter of King Ramachandra of Devagiri. The story of Padmini should not be totally rejected as a myth. But it is impossible, at the present state of knowledge, to regard it definitely as a historical fact".

In Bajirao Mastani, Bhansali told audiences what a brave general Bajirao Peshwa was. It prompted Col (retired) Anil Athale to write ‘Why Bajirao is India's greatest cavalry general’. Having assuaged Maratha pride, Bhansali got away with some historical distortions.

In Padmavati, Bhansali is trying to do a balancing act and be secular. Thus, he might tell audiences how romantic the Sultan of Delhi was, that his love for Padmini was as pure as the holy water of Zamzama, and the sexual conquest of beautiful Hindu queens was the last thing on his mind.

According to a report in the Indian Express, it is alleged by Rajput protesters that Bhansali has deliberately added a dream sequence in his movie which shows Khilji embracing and kissing Padmini, which is an affront to the honour and name of Rani Padmini. It is also a slur on the valour of thousands of Hindu Veeranganas who preferred to die by fire rather than submit to the lust of barbaric invaders.

Bhansali might take refuge under the excuse that the film is based on the poem Padmavat, whose historical significance is unconfirmed. But in the poem, there is no mention of the so-called dream sequence. Ultimately, Bhansali might change the name of the movie, like he did with Goliyon ki Raasleela Ram-Leela. Will it satisfy the nationalists?

Either way, the movie will attract protest like we saw in Jaipur recently. A few things for sure -- it will get free publicity, be discussed on prime-time television and become the next battleground between the nationalists and votaries of selective freedom of speech.

1. Volume 6 of the History and Culture and Indian People, published by the Bhartiya Vidya Bhavan, p 23

Ram Ohri is a former IPS officer and writes regularly on security issues, demographics, and occasionally, on policy.