Tales From The Mahabharata: A Profile Of Shukracharya 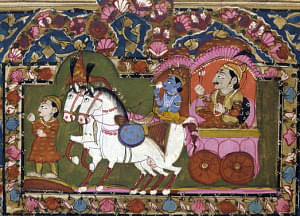 What exactly is the story of Shukracharya, the preceptor of the asuras?

Let me tell you a tale. Once upon a time the devas were locked in a deadly battle with the asuras. Try as they might, the asuras seemed incapable of being defeated. For the asuras would fall one day, felled by the devas, only to be revived by their preceptor, Kavya Ushanas – also known as Shukra. You see, Shukra knew the knowledge of sanjivani – the secret of bringing the dead back to life. Brihaspati, the guru of the gods, didn’t.

You most certainly know this story, don’t you? But indulge me nonetheless. There are two tales here. I will deal with the first one quickly. The gods approached Kacha – grandson of Angiras and son of Brihaspati, and requested him to go to the asuras, make friends with Devayani – the daughter of Ushanas – and learn the secret of sanjivani. Kacha agreed. As did King Vrishaparva – the king of the asuras – and Ushanas, to let Kacha be a disciple of Shukra. Both Ushanas and Devayani were pleased with Kacha’s devotion. Kacha “was at the peak of his youth” and Devayani was “a maiden who had just attained the bloom of her youth.”

But soon the danavas came to know who Kacha was and resolved to kill him. Their first attempt did not succeed, becauase Ushanas was able to summon Kacha back to life. So the next time when the asuras killed Kacha, they “burnt him, ground the ashes and mixed them with wine, and feeding this to the Brahmana.” When Devayani appealed to her father to bring Kacha back to life, Ushanas was faced with a dilemma. Kacha could be brought to life only with his own death – which would be caused when Kacha would emerge from his stomach. Such was the daughter’s love for Kacha that Shukra relented. Kacha received the knowledge of the sanjivani from Shukra, emerged from his stomach, and revived Shukra thereafter. What happened to the love between Kacha and Devayani? Since Kacha had emerged from Shukra’s stomach, he was in a way now a brother to Devayani. That was one tale of unrequited love. The story of Devayani does not end here, because she had a friend named Sharmishtha. That is the story of Yayati.

Now, in case you are wondering why was Devarshi Ushanas called Kavya, and how did he come to be called Shukra, you are in august company. Yudhishthira had the same question, and he posed it to Bhishma – “How did Ushanas, as radiant as an immortal, become Shukhra?” Thus begins our second tale.

Bhishma had this story to tell. It turns out that Sage Ushanas, a descendant of Sage Bhrigu, used his powers of yoga to bind up Kubera and rob him of his riches! A distraught and enraged Kubera approached Shiva and told him everything. An enraged Maheshvara took his spear and looked out for Ushanas. A unsurprisingly petrified Ushanas did not know whether “to run away, advance, or stay in the same spot.” Finally, and I am not sure what the wisdom in this was, Ushanas used his powers of yoga and placed himself at the top of Shiva’s spear. Dr. Debroy tells us that because of this Shiva could no longer release the spear – why, again I am not quite sure. Shiva then bent his spear with his hands into the shape of a bow, which brought Bhargava into the palm of his hand. Shiva then flung Ushanas down his mouth, and in Maheshvara’s stomach did Ushanas start to wander.

Ushanas prayed repeatedly to Shiva to allow him to emerge out of Shiva’s stomach. After much entreaties, Maheshvara agreed, permitting the sage to exit from his penis. Thus did Ushanas emerge and began to be known as Shukra. Why? Because Shukra in Sanskrit means “semen”, though it can also mean “seed.” In any case, upon seeing Shukra, Bhava (Shiva) was ready to kill him, but was restrained by Parvati, who argued that someone (Shukra) who had emerged from Shankara’s stomach did not deserve to be killed. A smiling Shiva relented and gave Shukra permission to go wherever he wished.

So Shukra owed his life to the benevolence of Shiva and Parvati, who allowed him to emerge and then live after he emerged from the great lord’s stomach. Much later, Shukra had to die to let Kacha emerge from his stomach, but was revived because of the knowledge of sanjivani that he imparted to Kacha – did Shukra experience a moment of déjà vu?

As an aside, after Kacha brought Shukra back to life, Shukra ordained that “if a stupid Brahmana commits the crime of drinking wine, he will have considered to have committed the crime of killing a Brahmana.” But what happened when a brahmana was killed, and by none other than Indra? Who bore that sin? Or part of that sin? That is a tale for another telling.

Did you know that when Shiva bent his spear into the shape of a bow, the “terrible weapon that was the spear came to be known as Pinaka?” Dr. Debroy tells us that “the etymology of Pinaka is based on its being bent with the hand (pani).”

Note: The story of Kacha and Devyani is recounted in the Sambhava upa Parva, part of the Adi Parva. The story of Shukra’s name appears in the Moksha Dharma upa Parva, contained within the Shanti Parva  I have used Dr Bibek Debroy’s Mahabharata, Volumes 1 and 9, an unabridged translation of the Critical Edition of the Mahabharata, published by Penguin India in 2010 and 2014, respectively, as my reference.