The Classical Hindu Temple: An Embodiment Of The Astronomical Knowledge Of The Time 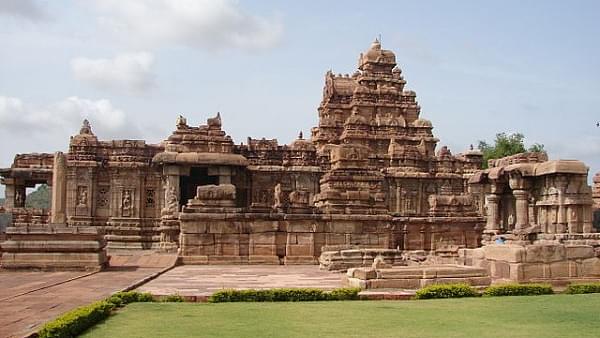 This is the first in a two-part essay which describes the basis for the dimensions of the axis and the perimeter of the classical Hindu temple.

Śāstric texts describing the plan of the Hindu temple allude to its astronomical basis, and in this, Indian sacred geometry is not different from the sacred geometry of other ancient cultures. If astronomical alignments characterise ancient temples of megalithic Europe, Egyptians, Maya, Aztecs, Javanese and Cambodians, they also characterise Indian temples. For example, the garbhagriha of certain temples is illuminated by the setting sun only on a specific day of the year, or the temple may deviate from the canonical east-west axis and be aligned with a naksatra that has astrological significance for the patron or for the chosen deity of the temple.

A part of the astronomical knowledge coded in the temple layout and form is canonical or traditional, while the rest relates to the times when the temple was erected. The astronomy of the temple provides clues relevant not only to the architecture but also the time when it was built.

The Agnicayana altar, the centre of the great ritual of the Vedic times that forms a major portion of the narrative of the Yajurveda, is generally seen as the prototype of the Hindu temple and of Vāstu. The altar is first built of 1,000 bricks in five layers (that symbolically represent the five divisions of the year, the five physical elements, as well as five senses) to specific designs. The Agnicayana ritual is based upon the Vedic division of the universe into three parts, earth, atmosphere, and sky (Figure 1), which are assigned numbers 21, 78, and 261, respectively; these numbers add up to 360, which is a symbolic representation of the year. These triples are seen in all reality, and they enlarge to five elements and five senses in a further emanation.

The householder had three altars of circular (earth), half-moon (atmosphere), and square (sky) at his home (Figure 2), which are like the head, the heart, and the body of the cosmic purusa. In the Agnicayana ritual, the atmosphere and the sky altars are built afresh in a great ceremony to the east. The numerical mapping is maintained by placement of 21 pebbles around the earth altar, sets of 13 pebbles around each of the 6 dhisnya (atmosphere for 13×6=78) altars, and 261 pebbles around the great new sky altar called the Uttara-vedi. The Uttara-vedi is equivalent to the actual temple structure. Vāstu is the remainder that belongs to Rudra, and Vāstupurusa, the temple platform, is where the gods reside, facing the central square, the Brahmasthāna. Given the recursive nature of Vedic cosmology, we know that the Uttara-vedi also symbolised the patron in whose name the ritual is being performed, as well as purusa and the cosmos.

The underlying basis of the Vedic representation and ceremony are the notions of bandhu (equivalence or binding between the outer and the inner), yajña (transformation), and paroksa (paradox). To represent two more layers of reality beyond the purely objective, a sixth layer of bricks that includes the hollow svayamātrnnā brick with an image of the golden purusa inside is made, some gold chips scattered and the fire placed, which constitutes the seventh layer (ŚB 10.1.3.7). The five layers are taken to be equivalent to the Soma, the Rājasūya, the Vājapeya, the Aśvamedha and the Agnisava rites. The two layers beyond denote completion, since seven is a measure of the whole. The meaning of this is that the ceremonies of the great altar subsume all ritual.

According to ŚB 7.4.1, within the hollow brick in the navel of the Uttara-vedi, a lotus-leaf is placed upon which is then placed a gold rukma (a disk, with 21 hangings), which symbolises the sun. The golden purusa (representing Prajāpati as well as the Yajamāna himself) is laid on the back with the head towards the east on top the rukma.

On the sides of the golden purusa are two offering spoons, like two arms. Upon this image is placed the already-mentioned svayamātrnnā (self-perforated) brick. In total, there are three such bricks, in the centre of the first, the third, and the fifth layers. There are seven more bricks placed to the east of the svayamātrnnā brick in the fifth layer. Next is a wooden mortar, and on top of the mortar is placed the ukhā, the firepan which becomes the focus of the fire ceremony. The “sixth layer is the heavenly world, and the seventh layer is immortality” (ŚB 8.7.4.17-18).

That the worship of Śiva, Visnu, and Śakti emerged from Agnicayana is described at length by Viśvambharanātha Tripāthī in his Agnicayana, which was published by Sampurnand Sanskrit University in Varanasi in 1990. The temple is not merely the buildings, the deity, but also the complex of the yajña, pūjā, or ceremonies performed there so that in totality it represents both the being as well as the becoming. The becoming, or the transformation, requires the use of a special vocabulary related to inner processes. Briefly, Rudra is one of the names of Agni. According to Vājasaneyi S. 16.2, Agni has two forms, the auspicious Śiva and the fierce Rudra. During the building of the altar, Agni appears in its raudra manner, and to propitiate it, the Śatarudriya homa is performed. This propitiation of Agni-Rudra is also done literally by a stream of water that drops out of an earthen pot hung over the linga. In one of the constructions of Nāciketa Agni, 21 golden bricks are placed one top of another to form the linga (Taittirīya Br. 3.1.1.6).

In the Vaisnava tradition, the visualised golden purusa is Visnu-Nārāyana, who emerges from the navel of the lotus on the Uttara-vedi that represents the waters, and for this reason is also called Padmanābha. The golden disk upon the lotus is then the sudarśana cakra of Visnu.

In the building of the Uttara-vedi, seven special krttikā bricks (named ambā, dulā, nitatni, abhrayantī, medhayantī, varsayantī, cupunīkā) together with asādhā, which is the eighth, are employed. The firepan (ukhā), which symbolises Śakti, the womb of all creation, is taken to constitute the ninth. Nine represents completion (as well as renewal, as in the very meaning of the Sanskrit word for nine, nava, or “new”) and symbolises the power of the Goddess. In later representation, which continues this early conception, the nine triangles of the Śri-Cakra represent Prakrti (as a three-fold recursive expansion of the triples of earth, atmosphere, and the sky).

The ritual is a sacred theatre that describes dualities to help one transcend them. Rather than the indirect reference to two golden birds of the Rgveda, ŚB 10.5.2.9- 11 says directly that there are two individuals within the body: the one in the right eye is Indra (representing articulated force) and the one in the left eye is Indrānī (Indra’s consort representative of Prakrti). “These two persons in the eyes descend to the cavity of the heart and enter into union with each other, and when they reach the end of their union, the individual sleeps.”

But our objective here is not on the connections between Agnicayana and the traditional Śaiva, Vaisnava, or Śākta systems. Rather, we wish to focus on the narrow question of the layout of the Agnicayana structures and relate it to the specifics of the dimensions of the axis and the perimeter of the classical Hindu temple. I have described the astronomy underlying Vedic ritual earlier in several books and papers and it will not be further mentioned here.

This essay is part of a paper originally presented at the Kannada Vrinda Seminar Sangama 2005 held at Loyola Marymount University in Los Angeles on 19 November 2005.