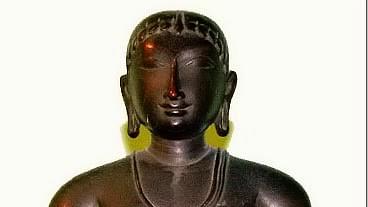 A peek into Thiruvachakam, a collection of spiritual verses on devotion to Shiva from the saint Manikkavachakar in Tamil language.

Do not sip honey From a small flower of the size of a millet seed.

Whenever we think of Him, Behold or speak of Him,

This  beautiful verse directs the humming bee wandering in small pleasures, jiva  (individual soul)  to yearn for Shiva, the Supreme soul and abode of boundless joy.

It is from Thiruvachakam, a collection of 656 deeply spiritual verses that poured out from the heart of saint poet Manikkavachakar in Tamil language.  (Pronounced as thiruvāchakam and  māṇikkavāchakar, the names  are also spelt popularly as Thiruvasagam and Manikkavasagar respectively)

Manikkavachakar lived during 9-11th century CE, with different viewpoints prevalent regarding exact dating. The popular legend about his life, narrated in later Purana style texts goes like this.

Born in a Brahmin family in Thiruvathavur, a hamlet near Madurai, his original name was Vathavuran. He became a learned scholar at a very young age and served as the minister of the king Arimardana Pandya.

Once, in course of his travel to buy horses for the king, an illuminating scene of a sage surrounded by his disciples around a tree made him stop there. In that divinely inspired moment, he at once recognized the sage to be his Guru, and sat at his feet and got immersed in the meditation of Shiva, totally forgetting about the assignment.

All the money that he had brought was spent in building the Shiva temple and for the service of the devotees and seekers.  Upon king’s repeated enquiries about the horses, he replied that they will arrive on time, in the middle of his divine ecstasy.

On the designated day, a majestic horseman rode into the streets of Madurai and paraded horses of superior breeds and the king was immensely pleased. But, on that night, the horses tied up in the royal stable had turned into foxes and ran towards the forest, howling loudly.

Astounded by this magical fraud of turning “foxes into horses”, the king ordered for Vathavuran to be chained and incarcerated.  In a fit of divine rage, the Vaiagai river flooded the city, and each household had to provide compulsory labour to stem the river.

The poor old women Vanthi, who carried on with life by selling puttu (sweetened rice) on the streets, did not have anyone and employed a young boy, who was ready to work just for handfuls of puttu.  At the work site, the careless boy received blows from the king’s cane for not working properly. Lo, the blow reverberated in the entire cosmos, on all beings, including on the king’s back.

The king instantly realised that it is Shiva Himself, who came as the boy and also as the horseman for the sake  of Vathavuran,  an elevated soul, in His characteristic style of mischievous divine play.  The king begged pardon and relieved the minister of all his worldly duties. Vathavuran went back to Thiruperunthurai, where Shiva had manifested as Guru and transformed him.

He then continued on his pilgrimage, singing divine praises of Shiva and expressing his spiritual moorings. He finally reached Chidambaram, the abode of the Cosmic Dancer and merged with Him.  It is said that Shiva came once again as a scribe and wrote down the verses of Manikkavachakar (He whose words are gem), which  became Thiruvachakam (The Sacred Utterance).

Thiruvachakam is one the canonical texts of Tamil Saivism grouped into Twelve Thirumurai books and is a highly revered and loved scripture.  Its verses are sung in every major Shiva temple of Tamil Nadu and Sri Lanka and chanted by pious Shiva devotees regularly.

The work can be viewed as the spiritual autobiography of its author, replete with personal experiences and also as a poetic expression of the profound concepts of Saiva Siddhanta philosophy. It is this quality that makes Thiruvachakam appeal to both the lovers of literature and also to the devotees and seekers.

The legend of “foxes turning to horses” is also interpreted as a metaphor for spiritual metamorphosis by some scholars.

Vedantic vision of Nirguna Brahman (formless), the Cosmic Deity gets harmoniously blended with the Saguna (with form) worship of Shiva as Personal Deity in many verses.

Spheres of heavens pervading the cosmos, Limitless Uberous,  and in multitudinous forms, Excelling  each other in beauty and comeliness, Exceeding in number a thousand millions …

Expands He as the expanding magnificence of all existence Indwells He as the infinitely small essence of the atom.   [2]

Bhakti, the divine love pours through many rapturous, touching and emotive expressions.

It is Yourself you gave to me, And received from me, myself. O Shankara,  who is the cleverer one? I received unending bliss; What did you receive from me at all? My Lord, who for your shrine has taken my thought! O Shiva abiding at sacred Perunturai! O my Father, and my Master! You abide in my body, How can I requite you for this?  [3]

The feeling of sharanagati, unconditional surrender from the devotee, and also soulabhya, the unconditionally simple grace of the divine, both are transposed beautifully in many verses.

You know what I should seek for, You wholly grant what I seek for. Unto Vishnu and Brahma that seek you

You are hard to reach. Seeking me with your own will,

You made me serve you. Whatever You desire to bless me with, I desire nothing but that. If yet, I seek anything Is not that indeed Your own desire?*  [4] (* The Tamil wordings are such that that it would also mean “Desire on You alone”)

Various forms of Shiva and His glories like devouring the halahala poison, annihilation of tripura demons, and destruction of Daksha’s sacrifice are sung  with deep philosophical connotations in Thiruvachakam, coupled with the delightful literary nuances like meters, phrases and allegories.

There are enchanting verses that are based on songs or catch phrases used during games played by women of those times, some of which still survive.

Ammanai is a throw game in which each girl sings heroic deeds of her lover ending ammanaai and then passes the ball.  Unthi parathal  is  a game in which a girl jumps up holding another’s shoulder shouting ‘unthipara’.  Thiru pon Usal has songs meant to be sung while swinging.

Chaazhal is a verbal duel game.  A girl poses a riddle or an objection ending with ennedi (My Dear, roughly)  and the other girl picks up from that and answers it, ending with chaazhalo.

His palace is the cremation  ground,  His goodly garment is tiger skin; Motherless and fatherless, all alone He dwells,

See My Dear ! Motherless and fatherless, all alone He dwells,

Yet, if He be wrath, the worlds will crumble to powder, Chaazhalo !  [5]

Parvati, the daughter of the mountain, as part of Him He placed; Yet, another women, in watery form, leaped onto His matted hair !

Why This, My Dear?

If, in watery form, she had not leaped onto His matted hair, The whole world, in utter ruin, would have got washed into the Abyss, Chaazhalo !   [6]

Manikkavachakar was a man of exemplary moral character from the birth.  The deep anguish, self pity and self deprecating tone that we see in some verses are not an account of his past deeds, but powerful literary devices that he employs so that any ordinary devotee or seeker or also can identify with its spirit.

O Mother ! O Father ! O Gem beyond compare ! O rare Nectar Emerging from Love ! I am vile. I foster mere worms in my body, uttering falsehood in Increasing numbers and wasting my precious days. On me You conferred the salvific Shiva-Consciousness ! O Opulence ! O God Shiva ! In this very birth, I caught You and hold You in my firm grip. How can You move away at all?  [7]

Thiruvachakam, through the medium of Shiva Bhakti emphatically declares the idea of oneness that embraces all of humanity. In that, it is synonymous with all other Hindu schools of philosophy and mysticism.

Caught up in the maelstrom of caste, clan and birth, I stood Bewildered, like a hapless dog. He destroyed all my misery, all illusions of alien forms, all thought of ‘I’ and ‘mine’. Him I have seen, the flawless nectar, At love-abounding Tillai.  [8]

Thiruvachakam was originally translated into English in 1900 by G U Pope, a British Christian Evangelist, who had acquired scholarship in Tamil to the extent of translating such a classical work.

Pope is remembered with gratitude by many Tamils for this. But his accompanying notes to the translation reveal his real intention to map Saivism on to Psalms and Christian poetry. This was promptly followed up by the later theologians resulting in serious attempts at appropriating the Hindu text into Christian dogma.

This sordid saga is explained in detail in the book  Breaking India [9].  The translation is filled with distortions at places and intentional usage of phrases from Christian theology.

The more recent translation by late Dr. TN Ramachandran, an erudite scholar is notable for its precise diction and accuracy of import and meaning, though it falls short a bit on lucid verse  rendering  and  dapting to the sensibilities of modern literary readers  [10].

All verses in this essay are based on the translation by Dr. TN Ramachandran. I have modified them in quite a few places for brevity and better readability.

References available in the next page