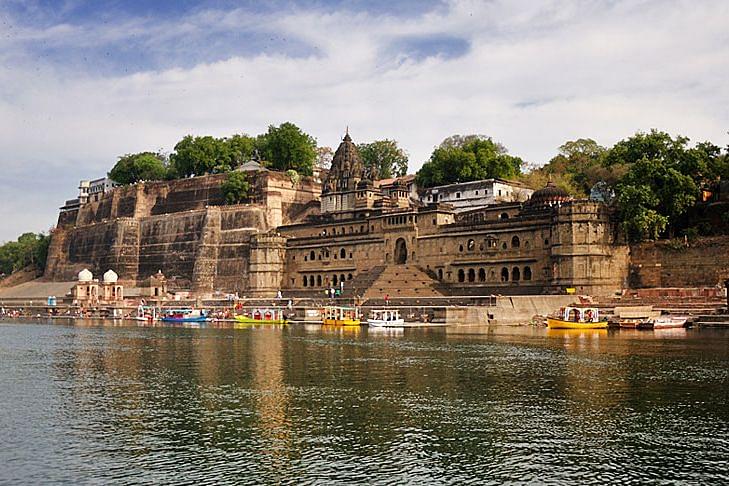 The mystical triangle of Omkareshwar, Mandu and Maheshwar in Madhya Pradesh with its beautiful surroundings was showcased on the virtual platform as part of the Dekho Apna Desh series.

Presented by Ashima Gupta, Commissioner of Income Tax, Indore and Sarita Alurkar, Singapore-based marketing professional, the webinar highlighted the richness of the destinations covered under the mystical triangle for the viewers.

The first stop of the mystical triangle was Maheshwar or Mahishmati, which is 90 kilometres from Indore. It is one of the most serene and captivating destinations of Madhya Pradesh with historical significance.

The city got its name after Lord Shiva/Maheshwara. It also finds a mention in the epics Ramayana and Mahabharata. The presenters described in detail the life and times of great Maratha queen Rajmata Ahilya Devi Holkar.

Situated on the northern bank of Narmada, the town was the capital of Malwa during the Maratha Holkar reign until 6 January 1818, when the capital was shifted to Indore by Malhar Rao Holkar III.

In the late eighteenth century, Maheshwar served as the capital of Rajmata Ahilya Devi Holkar. She embellished the city with many buildings and public works, and it is home to her palace, as well as numerous temples, a fort and ghats.

The queen is also known for her simplicity, which is evident even today in Rajwada or the royal residence — a two-storey building, where the queen used to meet her people. Tourists can experience the royal environment related to the queen.

Ahilyeshwar Temple, where Ahilya Devi used to offer prayers, Vitthal temple near Achaleshwar Temple are must-see places for aarti, and to admire architecture. There are around 91 temples that were built by the Rajmata.

Ghats in Maheshwar are the best places to experience the beauty of sunrise and sunset, and the fort complex can also be seen at its best from Ahilya ghat. One can also go on a boat ride during the evenings when boatmen light small diyas as an offering to the Narmada.

Baneshwar Temple, which is dedicated to Lord Shiva, is one of the must-see temples of Maheshwar especially during sunsets. Narmada aarti is performed after sunset at the river ghat.

Textiles are another important aspect that was developed by Ahilya Devi. She invited master weavers from Surat and south India to weave saris that were unique. The designs drew inspiration from fort architecture and the Narmada. These were gifted to royal guests.

Rajmata Ahilya Devi Holkar was a generous patron of the arts. She loved saris, and in 1760 sent for the famed weavers of Surat to enrich her kingdom with fine cloth — something worthy of the royal family.

Under the princely state, the weavers' arts flourished and specialised into the present-day Maheshwari cloth. Once an all-cotton weave — in the 1950s silk started being used in the warp and slowly became the norm. Rehwa Society, founded in 1979, is a non-profit organisation working for the welfare of weavers of Maheshwar.

Omkareshwar has 33 deities and 108 impressive shivlings in divine form and this is the only jyotirlinga, which is situated on the northern bank of the Narmada. Omkareshwar is a spiritual town in Madhya Pradesh, 78km from Indore.

A visit to Omkareshwar Temple is incomplete without visiting Mamleshwar Temple. It is believed that Lord Shiva comes here to rest everyday considering that a special shayan aarti is performed at 8.30 pm, when a game of dice is arranged for Lord Shiva and Goddess Parvati.

Siddhanth Temple is one of the most beautiful temples that one should definitely save time to explore.

Mandu located in Dhar district is also known by the name of Mandavgarh, Shadiabad (City of Joy). It is about 98km from Indore, and at an elevation of 633 metres. The nearest railway station for Mandu is Ratlam (124km). The fort in Mandu is spread over an area of 47 sq km and its wall is spread across 64 km.

Mandu is mainly known for the love story of Sultan Baz Bahadur and Rani Roopmati. Once out hunting, Baz Bahadur chanced upon a shepherdess frolicking and singing with her friends. Smitten by both her enchanting beauty and her melodious voice, he begged Roopmati to accompany him to his capital.

Roopmati agreed to go to Mandu on the condition that she would live in a palace within sight of her beloved and venerated river, Narmada. Thus was built the Rewa Kund at Mandu. Having come to know about Roopmati’s beauty and sweet voice, the Mughals decided to invade Mandu and capture both Baz Bahadur and Roopmati. Mandu was easily defeated and when the Mughal forces marched towards the fort, Roopmati poisoned herself to avoid capture.

Baz Bahadur's Palace built in the sixteenth century is famous for its large courtyards encompassed by large halls and high terraces. It is situated below Roopmati's Pavilion and can be seen from there.

It is a reservoir constructed by Baz Bahadur for the purpose of supplying water to Rani Roopmati's Pavilion. The reservoir, situated below the pavilion, is considered an architectural marvel.

Situated between two artificial lakes, this two-storey architectural marvel is so named as it appears like a ship floating in water. Built by Sultan Ghiyas-ud-din Khalji, it served as a harem for the sultan.

One cannot afford to miss the local food like poha, kachori, bafla etc, while travelling in this circuit.

Summing up the webinar, Rupinder Brar, additional director general, stressed the importance of travelling and experiencing the priceless joy.

The sessions of webinars are now available on ministry's social media handles.