Tyagaraja: What Inspired The Great Saint-Composer? 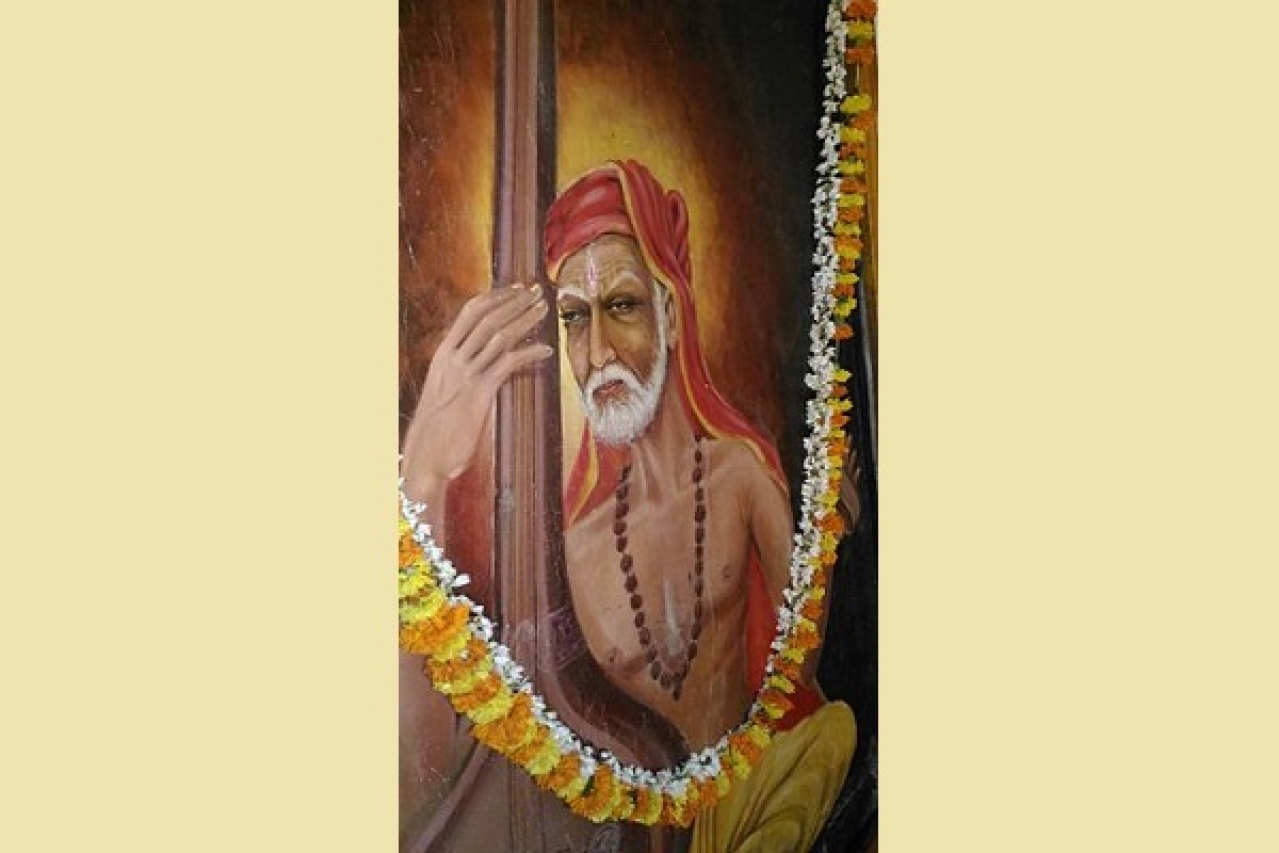 Tyagaraja’s mastery over music and lyrics and his towering genius have inspired many a composer. To this day, the prolific composer’s compositions are a template for others. Born around the same time as the other members of the trinity, in what can be called an epochal time in the history of Carnatic music, he made krithi the mainstay of the tradition. But who could have inspired him? A look at Tyagaraja’s body of work, his biography and the history of the region might give us some pointers.

Influence of the two traditions

To say that ramabhakti permeated his life and compositions is an understatement. The most popular picture of him drawn in his lifetime and other hagiographic pictures portray him as a bard with the tambura in one hand, ‘chirata’ (the small percussion instrument) in the other, and lost in bhakti. As much as he composed those so-called ‘heavyweight’ compositions including the ‘Pancharatnas’, which became the mainstay of the Carnatic tradition, there were not few but many devotional, lyric-centred Divyanama Sankeertanams suitable to be sung at Bhajana-Goshtis that might have come out during his puja, unchavritti and other rituals. The Bhajana Sampradaya tradition started by Sri Bodhendra Sadguru Swami was well-established by his time and its influence can only be expected. While the krithis like ‘Namakusumamula’ and ‘Bhajana seyave’ extol the practice of Namasamkeertanam, Rama Kodandarama (Bhairavi) and Rama Rama Neevaramu showcase it.

Bhagavatamela tradition in and around Tanjavur was also very strong at the time, courtesy the patronage of the Nayaks. Melattur Venkatarama Sastry lived not far before Tyagaraja. Narayanateertha is also associated with this tradition. We can see its influence in his Yakshaganas, which are more of Sangeeta Natakams, namely Prahlada Bhakti Vijayamu and Nauka Charitram.

Tyagaraja pays homage to Narada in Prahlada Bhakti Vijayamu and in a few of his krithis, prominent one being ‘Sri Narada Muni’, where he addresses him as guru (“gururaya”). Purandaradasa too is praised in the form of a padyam, and krithis like Grahabalamemi (inspired by Sakalagrahabala neeve sarasijaksha) show his influence.

There are poems on Narayanateertha, Goswami Tulasidas and others in his Yakshaganams. He composed ‘Manasa Sancharare Rame’, probably inspired by Sadashiva Brahmendra’s ‘Manasa Sancharare Brahmani’. The Vibhakti (noun case) too matches except that for Tyagaraja, Rama was the ‘Brahman’.

Kancherla Gopanna, popularly known as Bhadrachala Ramadasu, was the other prominent composer who composed on Rama and is referred by Tyagaraja in the krithis ‘Ksheerasagara Shayana’ and ‘Kaligiyunte’. Apart from this, it’s astonishing to see the number of Pallavis shared by the two. Some examples are ‘Etulabrotuvo’ and ‘Etubotivo rama etubrotuvo’, ‘enduku dayaradura’ and ‘enduku dayaradu srirama’, ‘ela nee daya raadu’ and ‘ela daya raade ramayya’ – and we are only talking about the akshara ‘e’. There are other krithis like ‘ramabhadra rara’ and ‘rama rama neevaramu kava ra ra’.

The influence of the great Telugu poet Bammera Pothana and his Bhagavatam is of a completely different kind. Srimadandhra Maha Bhagavatam was Pothana’s penance and occupies a unique place in the consciousness of Telugus. Pothana was a Shaiva who had a vision of Rama while meditating on Shiva. Rama asks him to write Bhagavatam in Telugu and dedicate it to him. Poems like ‘Chetularanga shivuni poojimpadeni noru novvanga hari keerthi nuduvadeni’ showcase his feelings of abheda between Shiva and Vishnu.

Named after the Shiva of Tiruvarur, Tyagaraja not only composed many krithis on Shiva, but used the mudra ‘Tyagaraja Nuta’, which could also imply ‘the one who is praised by Shiva’. Pothana’s Bhagavatam was a Nityaparayana Grantha for him and he seems to have influenced Tyagaraja’s approach towards life. The similarities in the way they led their lives cannot be glossed over as a coincidence. Pothana chose to live the life of a farmer, shunning Rajashrayam, which he proudly proclaimed in the poem ‘balarasalasala navapallavakomala kavyakanyakan’. He says it’s better to be a farmer than to sell his daughter-like work (kavya-kanyaka) to cruel people (kULalu). Sarvagnasinga Bhupala, the local king, is said to have pressurised him to dedicate Bhagavatam to him. Another padyam where he declares his intent forcefully.

(Instead of giving it (his work) to kings of the worst kind and get hit by Yama with a hammer, this one called Bammera Pothana willingly gave his Bhagavatam to Hari for the benefit of the world.)

Tyagaraja too was a non-conformist in his own ways and lived on unchavritti and gurudakshina and was well-known to reject royal patronage. In the krithi ‘durmarga charAdhamulanu’, he says that he would not want to trade his ‘paluku boTi’ (lady of speech) with durmargas and his source of wealth was Rama.

This again takes us back to Pothana’s poem where he assures a weeping Saraswati that he will not trade her to Kirata-keechakas (kaaTuka kanTi neeru chanukaTTu payimbaDa).

To showcase some more examples, there is a famous poem from Prahlada Charitram, where Prahlada explains why he cannot pray to anyone other than Vishnu.

(A honeybee floating in the nectar of Mandara, will it go to wild jasmine?

A swan gliding on the beautiful Mandakini, can it go to other bodies of water?

A cuckoo used to savouring the tender mango shoots, can it go to a dattura plant?

A chakora bird soaking the moonlight, will it go to frost?

The mind that’s full of the nectar of Vishnu-chintanam, will it ever get fixed on others?)

The famous Tyagaraja krithi in Kalyani Ragam expresses similar thoughts employing comparison and question that is not high on shabdalankara like the poem above but high on arthalankara and philosophical content.

(Does material wealth cause happiness or proximity to Rama?

Do milk and yogurt taste great or the nectar called Rama-dhyana?

Does Ganga-snanam help in controlling mind and body or indulging in the well of sensual pleasures?

Is bondage-causing Narastuti (praising mortals) better or singing the glory of the one praised by Tyagaraja?)

In another well-known poem, Pothana discusses the worthiness of the Indriyas.

(The hands that worship Kamalaksha, the tongue that describes Srinatha!

The looks that savour Surarakshaka, the head that bows to Seshasayi!

The ears that listen to glory of Vishnu, the mind that is fixed on Madhuvairi!

The feet that follow the Bhagavan and the intellect that’s focused on Purushottama!

The day that passes with thoughts of Devadeva, the knowledge that reveals Chakrahasta!

The guru that teaches Kumbhiniidhava (husband of the earth), the father that implores you to reach Hari!

Only these are the ones worthy to be called as such.)

The below Tyagaraja krithi in neelambari ragam is very similar but with added emphasis.

(What are the eyes that cannot find the lord for?

What is the body that doesn’t tie/attach itself to Srihari for?

What are the hands that do not worship him with lotus, malli and tulasi for?

What is this family life for?

What is the tongue that doesn’t praise the lord that rules over Tyagaraja for?

What is the japamala for?)

A similar thought is seen in Sri Kulasekharazwar’s poem from Mukundamala, wherein he implores his senses to turn to Vishnu.

As we celebrate 250 years of Tyagaraja, who provided a definitive shift to the tradition of Carnatic music, it is worthwhile to remember the people, traditions and the entire ecosystem of Tanjavur area that may have inspired him.