Udta Punjab: The Best Hindi Film Released So Far In 2016 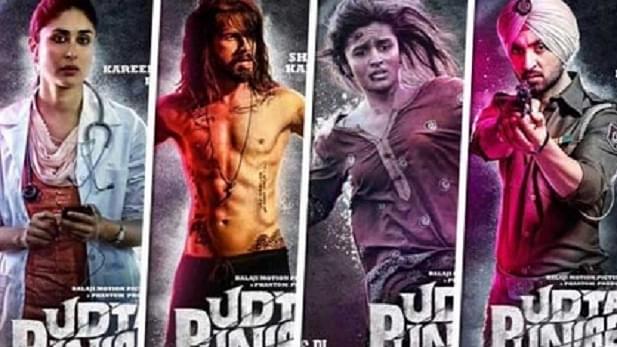 First things first. I do not agree with the Bombay High Court’s decision to let Udta Punjab be released with just one cut—a shot of the Shahid Kapoor character, a rock star called Tommy Singh, urinating on his audience from the stage.

That shot should not have been cut.

Not only was there nothing gratuitous or obscene about that shot, it is in fact vital to the film’s narrative. The shot was the climax of the most important sequence in the film, one that turns the whole story on its head, and sets up the film’s Final Act. The deletion robs the sequence of its full power.

In fact, some of those who are unaware of this particular cut ordered by the honourable High Court will possibly be slightly befuddled by the intensity of the action that takes place right after that sequence. Why, after all, would Tommy Singh’s deliriously-in-love fans turn so violently against him?

Why would they be so pissed off?

Why would a non-bailable warrant be issued against Tommy for “lewd and lascivious behaviour in public”?

All right, if there is anyone reading this who has already watched the movie and may have been mildly puzzled (I’m sure most of you are not), I hope this helps. And for those who haven’t seen the film yet, I have given out a little spoiler, but only a little one. And it’ll possibly help them enjoy the film better.

Because, see Udta Punjab you must. And please do not watch the leaked copy on YouTube. Go to a hall, spend your money and watch it. This is the least that the film’s team deserves, after being subjected to such insane tribulations.

For, it is, quite simply, the best Hindi film released so far in 2016.

Before I come to why I think so, let’s discuss the 89 cuts that the Central Board for Film Certification (CBFC, which all of us call “the censor board”, and which, we have now been told by the Bombay High Court, has no power to censor, only to certify a film) ordered.

A question here: Does the judiciary have the right to cut films? But let that be for now.

Most of these cuts that the CBFC ordered would have been, I guess, about the expletives that almost every character uses when he or she speaks.

This is utterly ridiculous. Each and every one of those expletives perfectly fits the character who says it. Not a single “b****c**d” or “m*****c**d” is out of place. This is exactly how such a person would speak in real life, and does.

Just think of any film from Guy Ritchie’s London underworld trilogy—Lock Stock and Two Smoking Barrels, Snatch, and RockNRolla, and imagine them with all the four-letter words deleted. Not only would they become unrealistic and insipid, they would be very poor films.

The more important—and totally indefensible—demand of the CBFC was that all references to Punjab be removed from the film, including from the title. Imagine Ramgopal Varma’s Satya or Company set in a fictitious city and not Mumbai. They would lose all the impact they have because of their connections to a real living city. They would be coerced to become inferior films.

That Punjab has a massive drug problem is one of India’s worst-kept secrets for more than a decade. And the conclusion that politicians or their family members may be involved in the drug trade is an obvious one—large-scale criminal activity can hardly ever sustain itself in India without some political linkages.

But we can’t write about it, make a film about it? What madness is this?

I was sitting next to a Sikh gentleman in the theatre. During the intermission, I asked him whether what Udta Punjab was portraying was true. He said he was from South Punjab, where the drug problem was not so serious, but in North Punjab, stretching from Ludhiana to Taran Taran to Amritsar to Pathankot, it was wrecking countless lives and families.

The heroin is mostly smuggled in from Pakistan, he said, and the money was quite possibly being used to fund jihadists. Everyone in Punjab, he said, knows that politicians turn a blind eye to the menace.

Well, now that the spleen has been vented (which is quite possibly incorrect English, but, as we Punjabis say, please to excuse), let’s get back to the film as it is, by itself.

Udta Punjab is most likely not going to make it to the list of 20 greatest Hindi films ever made, but it should certainly be mentioned as one of the most courageous ones in a mainstream commercial context. It deftly mixes gritty reality with a story that is popular-Hindi-film, but not fully. As far as happy endings go, the director and writer could have easily been less honest and done a cop-out, and the audience could have left the theatre happier. But what they decided to give us was a gripping and satisfying watch.

The acting is extraordinary, and Alia Bhatt, the butt of so many internet and WhatsApp jokes, is a revelation in the role of a Bihari girl who, if circumstances did not intervene, could have had a great career in hockey.

Diljit Dosanjh, a big star of Punjabi cinema, makes his debut in Hindi films in Udta Punjab, and the Mumbai film industry would be mad if it did not start rewriting scripts just for him. He makes the sort of impact that Nawazuddin Siddiqui made in Gangs of Wasseypur Part 2.

Shahid Kapoor, with his 24-pack abs, brings his usual commitment and energy into his role as Tejinder Singh from Phagwara, who managed to slip into the UK and become “Tommy” in Birmingham. Kareena Kapoor Khan has the easiest character to play, but that is hardly her fault or responsibility, and she delivers everything that is needed.

The three plotlines of Udta Punjab are about a fortnight or so in the lives of four people—a drug-addicted rock star, a migrant labourer who is turned into a heroin sex slave, a lowly corrupt police officer who undergoes a transformation when his kid brother overdoses, and a doctor who runs a drug rehab centre.

While the storylines do converge, none of the four get to know all of the other three. This itself is a great leap for Hindi cinema. And there will certainly be some critics who will compare Udta Punjab with Steven Soderbergh’s Traffic (2000), perhaps the greatest film ever made on the drug abuse problem.

This is because Traffic too has multiple storylines, but some of them touch the others only tangentially, and it is left to the viewer to paint the big picture for herself. Udta Punjab is not that ambitious, even though I can bet all my complimentary BookMyShow ticket vouchers that director Abhishek Chaubey, co-writer Sudip Sharma, and co-producer Anurag Kashyap would have studied Traffic harder than any PhD student.

Udta Punjab is not, cannot be Traffic, because a Hindi film with mainstream ambitions cannot afford so many ambiguities, cannot send the audience out of the hall with no reassurances, no clear message of hope, and no baggage that can be categorised later according to the deep and the light of the spectrum of grey.

We are not ready for that yet. But Udta Punjab pushes the envelope and is a step on the way up there.