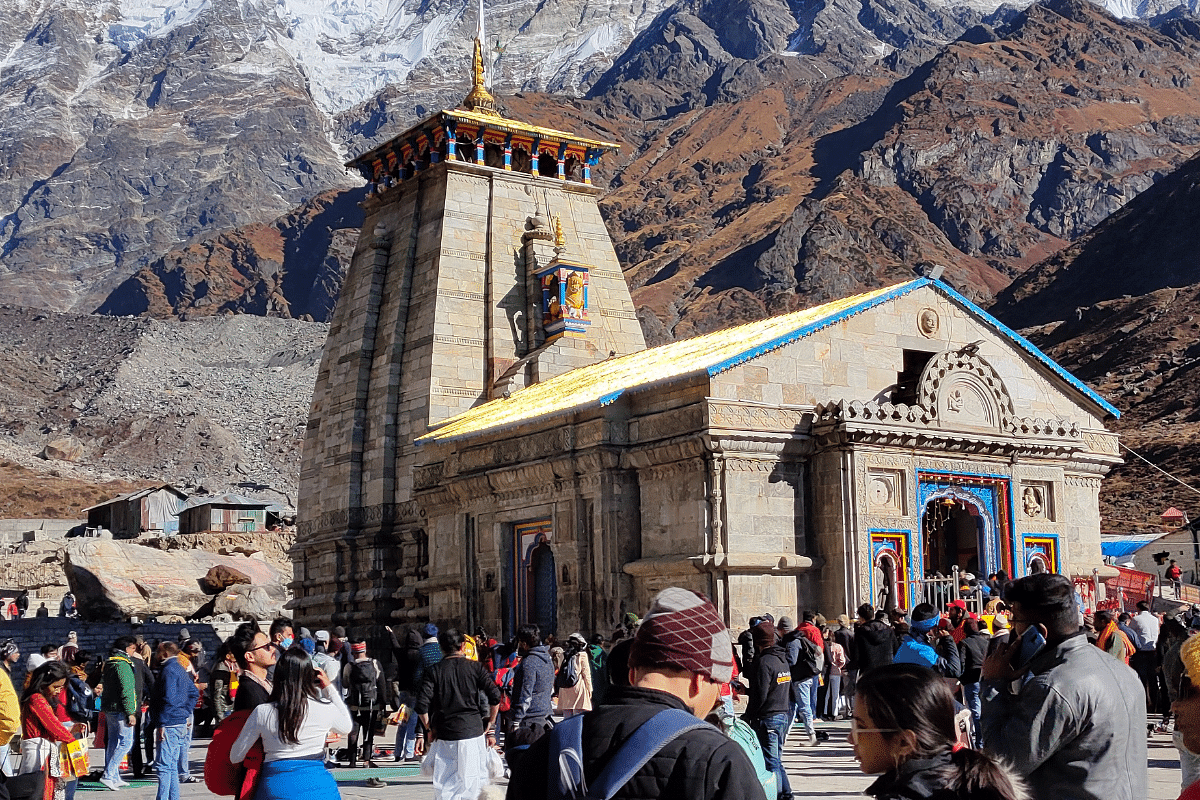 Visitors to Kedarnath, Uttarakhand (Photo by Akshay syal on Unsplash)

Officials and site managers at some sacred and heritage sites in Nepal are banning social media users who seek to boost their following by taking videos and using the sites as backdrop, reports say.

Steps are being taken at sites of religious and historical importance, such as Buddhist pilgrimage site Lumbini, Kathmandu’s Boudhanath Stupa, and the Ram Janaki and Gadhimai temples, to tackle the "nuisance", a Forbes report says.

To keep a watch on mobile phone 'nuisance' creators, surveillance cameras and security guards have been deployed at several sites. Rule-breakers are asked to leave, the report adds.

A report on news website Rest of World says "No TikTok" signs have come up at "several prominent tourist and religious sites in Nepal". Apparently, "officials keep a close eye at these places and rule-breakers are warned or asked to leave."

Sanuraj Shakya, a spokesperson at the Lumbini Development Trust, which manages the shrines in Lumbini, says in the report: “Making TikTok by playing loud music creates a nuisance for pilgrims from all over the world who come to the birthplace of Gautama Buddha.”

He adds: “We have banned TikTok-making in and around the sacred garden, where the main temples are located.”

Actions against making videos for social media at sacred sites and places of historical importance in Nepal, reports say, have been in place for around two years.

In India, discipline, dress code, and the presence of mobile phones around jyotirlinga temples have been of concern to temple managements and sections of devotees.

Recently, some devotees objected to a video of a girl dancing at the Kedarnath Dham. Others were of the view that the sacred site is being used by visitors for selfies and such to draw more views and to become popular on social media platforms Instagram and YouTube.

Reactions to similar incidents came up in Uttarakhand where a video "purportedly shot inside the sanctum sanctorum of the Kedarnath temple" went viral on social media.

The Badrinath-Kedarnath Temple Committee (BKTC) took note and reportedly urged the Uttarakhand government to build cloakrooms near the Kedarnath and Badrinath dhams so that pilgrims can deposit their mobile phones, wallets, and bags before entering the temple premises.

BKTC chairman Ajendra Ajay wrote a letter to Uttarakhand Chief Secretary S S Sandhu, requesting him to build a cloakroom to ensure that the sanctity, culture, and tradition of temples "is not violated by influencers and YouTubers".

Speaking to Swarajya, Ajay said, "Dharmic sthals have traditions attached to them. There are matters of sanctity and sacredness involved. Unke saath chhed chhad karna kayeen baar theek nahin lagta (meddling with them is not appropriate). Some pilgrims object to anything that's against the sanctity of the sthal. Drawing a line between paryatan and teerthatan — tourism and pilgrimage — is the need of the hour."

In 2021, a social media user from Indore was reportedly booked for taking a video inside the Mahakaleshwar Jyotirling Temple in Ujjain. A report in Hindustan Times says that "the temple’s main priest Mahesh Pujari called the video objectionable and asked the police to take action against her for hurting religious sentiments."

The user reportedly deleted the video after an apology, but another resident, Rakesh Parmar, filed a complaint against her at Mahakal Police Station.

Ajay added that the trend of bloggers, as well as 'influencers', especially those whose social media influence requires them to upload videos and 'reels', is coming to the dhams as the new 'apada' (disaster).

The perception is that YouTubers and vloggers make videos for their benefit and popularity without caring for the tradition, appropriate conduct around the temple and jyotirling, and the religious sanctity and feelings of people, and that they have little to do with the dharmasthal (sacred site), shraddha (reverence), manyata (respect) and tradition.

Ajay mentions that devotees coming to Kedarnath have raised objection to inappropriate behaviour around the temple by some visitors.

A cloakroom at the dhams where visitors will be required to leave their mobile phones will eventually contribute to ensuring that the video- and reel-making trend subsides and is eventually addressed.

In addition, these measures will go towards addressing the safety and security concerns of the dham.

Ajay adds that discussions on his request to the state government on the building of a cloakroom are underway. "Charcha ho rahi hai, vichaar kar rahe hain (deliberations are going on), the architects involved in the master plan will be mulling over the possibilities of a cloakroom and aspects around it," he says.

Outfits considered "maryada ke viruddh (indecorous)" have been a point of objection and topic of debate at the jyotirlinga temples, including Ujjain's Mahakaleshwar Temple.

It's early to say whether a dress code will come into place for darshan (sight) at the Kedarnath and Badrinath dhams. But concerns popping up during the yatra season this year have raised the possibility of norms for Indic clothing at the temples.