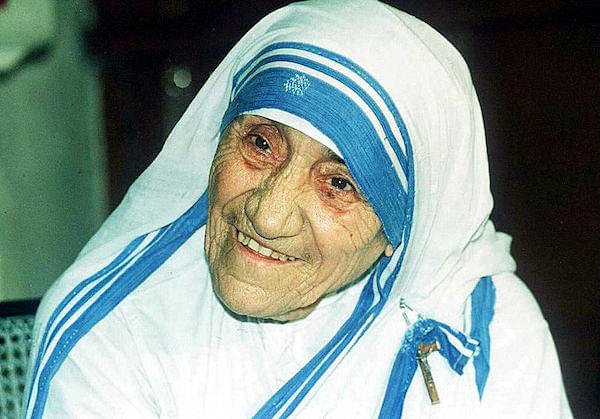 Anjezë Gonxhe Bojaxhiu arrived in Darjeeling during the British Raj as a teenager in 1929. She became a nun in 1931 and began her missionary work in India shortly after India became independent.

The Second World War consumed the early part of the tumultuous decade of the 1940s, and the nation became independent immediately in its aftermath. The Bengal famine of 1943, which historians have recently shown was worsened because of British Prime Minister Winston Churchill’s deliberate decision to hold back food supplies to India, killed up to four million people, or more than five percent of Bengal’s population, at the time and ruined communities across the region. Moreover, communal tensions surrounding the Partition of India had torn Kolkata apart through the late 1940s, with thousands more killed. It was in this context that Bojaxhiu, who is today known as Mother Teresa, set up the Missionaries of Charity.

Independence did not bring much respite for Bengal, as militant trade unionism and communist state governments destroyed local industry over the decades. By the turn of the century, Kolkata, which had once been the commercial and political capital of India, become an also-ran, as cities like Hyderabad, Bengaluru and Pune raced ahead. It was over these same decades that Teresa built her operation, with the destitution and hopelessness enveloping the city providing the raw material for the missionary machine. It is no coincidence that the rise of Teresa coincides with the socio-economic ruination of Kolkata and Bengal.

Dissenting views on Teresa’s contribution and work are not new, the works of Christopher Hitchens and Aroup Chatterjee being the most prominent. As a devout Catholic, Teresa saw personal suffering as a service to Christ. As a missionary, Teresa came to India to convert Indians and did it with success. This is the reason why the Catholic Church has decorated her with its highest title. Let’s just say that the Church is not known for bestowing the title of Saint on those who are not believers.

It is well-established that Teresa frequently denied scientific treatment to the ailing, preferring to glorify human suffering as an end in itself. As Aroup Chatterjee has recorded, Teresa would baptise the dying, and openly accepted this fact when speaking at the Scripps Clinic in California on 14 January 1992, when she exulted that “29,000 have died…from the time we began the work in 1952” and “not one has died without receiving “ticket for St Peter”…we call baptism “ticket for St Peter”.”

What does it say about Teresa’s personal ethics that she sought to convert the infirm, who came to her seeking care and comfort, on their deathbed, at a time when they may not have been in the mental and physical state to make considered choices?

Robin Fox, writing in the medical journal The Lancet in 1994 after a visit to Teresa’s home for the dying in Kalighat, observed “systematic approaches are alien to the ethos of the home. Mother Theresa (sic) prefers providence to planning; her rules are designed to prevent any drift towards materialism; the sisters must remain on equal terms with the poor.”

Commenting on the ability of the sisters to mitigate pain, Fox wrote, “I could not judge the power of the spiritual approach, but I was disturbed to learn that the formulary includes no strong analgesics.”

By the 1990s, Teresa was an international figure and had raised millions of dollars in donations. If her home for the dying did not even provide basic pain management medication, how and where was the money being spent? Fox’s observations are a troubling indictment of Teresa’s approach of prizing faith and religion above science in the treatment of those who came to her for care. As she often eulogised suffering, it would not be uncharitable to say that Teresa’s faith prevented her from provisioning relief to the helplessly poor who came to her, even though she had the means to do so.

Teresa railed against the rights of women to choose what they do with their bodies. Delivering the Nobel Peace Prize acceptance speech in 1979, Teresa proclaimed “the greatest destroyer of peace today is abortion.” This was at the height of the Cold War when the world was on the brink of a nuclear catastrophe. “We are fighting abortion by adoption”, Teresa had said then.

Those sympathetic to Teresa saw this as a great social service. But in 2015, the Government of India relaxed adoption rules, permitting single individuals to adopt children. In response, Teresa’s Missionaries of Charity moved to shut down its adoption homes. Sister Amala of the organisation’s New Delhi orphanage told the Washington Post, “We do not wish to give children to single parents or divorced people. It is not a religious rule but a human rule. Children need both parents, male and female. That is only natural, isn’t it?”

“The new guidelines hurt our conscience. They are certainly not for religious people like us, maybe they are for secular people…what if the single parent who we give our baby turns out to be gay or lesbian. What security or moral upbringing will these children get? Our rules allow only married couples to adopt,” Sister Amala said on the issue.

It is a little-known fact that Teresa supported the Emergency imposed by Indira Gandhi in 1975. “People are happier. There are more jobs. There are no strikes,” she said blithely, even as tens of thousands were jailed and Indira Gandhi wielded dictatorial power. After she had been awarded the Nobel Peace Prize, Teresa was given the Bharat Ratna by the Indian government in 1980. An official biography of Teresa was published in 1992, written by the infamous Navin Chawla, who went on to become chief election commissioner under the UPA government in 2009.

Chawla is a long-time courtier of the Nehru-Gandhi family and was particularly close to Sanjay Gandhi during the Emergency. The Shah Commission that investigated the dictatorial government’s actions during the Emergency observed in its report that Chawla was “unfit to hold any public office which demands an attitude of fair play and consideration for others” and said that Chawla had been authoritarian and callous, grossly abusing his powers in “cynical disregard of the welfare of citizens”.

In a 2007 article, Observer Research Foundation distinguished fellow Ashok Malik recorded in more detail some of Navin Chawla’s cruel actions during the Emergency. Chawla had supported the construction of jail cells with asbestos roofs to “bake” inmates, prevented student-prisoners from taking their exams to punish them and came up with a scheme that gave prisoners freedom if they agreed to be sterilised.

It was this man who was picked by Nobel Laureate and Bharat Ratna Mother Teresa to write her authorised biography when she could have selected practically anyone. What does this choice say about Teresa’s values, allegiances and personal character?

Despite this mountain of uncomfortable facts, Teresa enjoys a cult following among Indians, and people from Kolkata in particular. It would be simplistic to say that Teresa’s reputation persists because of ignorance – there is something deeper at play.

The identity of Kolkata and its residents has become enmeshed with Teresa. As people who have little to be proud of about their city, given its ruinous trajectory over the last several decades, they are inert to any honest discussion about Teresa because they see her as among the few icons they can take pride in.

Teresa’s success is ultimately only a reflection of the failures of India’s society, and of the defeated spirit of India’s wounded civilisation. Joining the bandwagon lionising Teresa is a quick and cheap way to rid oneself of any personal guilt at not having done something to address dehumanising destitution. In Teresa’s misguided efforts, we all take succour and seek emancipation that at least somebody tried.

But Teresa and her institution stand against practically every single modern value that we hope to see India embrace. She celebrated suffering and promoted superstition rather than seeking out science-based medical solutions with the substantial donations she amassed. She glorified poverty rather than finding ways to ameliorate the downtrodden. She practised and preached intolerance towards women while being one herself.

This is not to suggest that the Indian government should cripple or persecute Teresa’s organisation. They should be allowed to preach and practice what they please. After all, there is a difference between the values of the free Indian Republic and the fanatical dogma of missionary institutions out to harvest souls.

The correct way to tackle elements like Teresa is to reduce her customer base, to use a corporate analogy. Building an India that offers opportunity and uplifts all citizens is the surest recipe for ensuring that the twenty-first century does not see the emergence of another such person, and that project is well underway. The day India eradicates mass poverty, no Teresa will ever rise again.