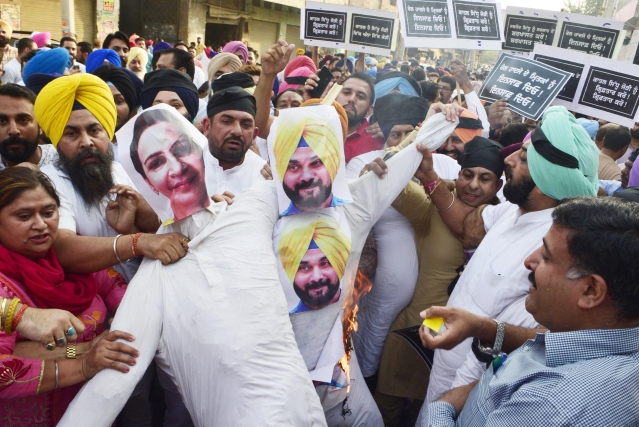 The son of a Congress leader, who organised the Dussehra event, has been indicted in a magistrate-level inquiry into the Amritsar train tragedy in which 61 people were killed. The probe has not held minister Navjot Singh Sidhu’s wife, former Amritsar-East MLA Navjot Kaur Sidhu, guilty. However, councillor Vijay Madan’s son Mithu Madan, who was one of the organisers, is a close aide of the Sidhus. The report concludes that the organisers did not take proper permission for the event and did not make arrangements to manage the crowd.

According to reports, Mithu Madan used the influence of the Sidhus to “tweak” the safety requirements for the events. A 300-page report on the accident has been submitted by Jalandhar Divisional Commissioner B Purushartha. The Government Railway Police is also investigating the incident.

Canada Arrests Huawei's Global CFO, To Be Extradited To The US

Canadian authorities have arrested the Chief Financial Officer (CFO) of China's Huawei Technologies, Wanzhou Meng, at the request of the United States (US). According to multiple reports, she has been arrested for violating sanctions imposed by the US on Iran. The arrest is significant as Meng is also the deputy chairperson of Huawei's board and the daughter of the company's founder, People's Liberation Army officer turned entrepreneur Ren Zhengfei.

Meng was arrested on 1 December. The details of the case against Meng have not been shared as a court has granted her a publication ban after a judge agreed to bar both police and prosecutors from releasing information about the case. The arrest comes at a critical moment in US-China relations. After engaging in a tit-for-tat trade war with Washington for months, Beijing has agreed to buy more from the US in exchange for relief from tariff hike.

Aljo K Joseph, the national in charge of the Indian Youth Congress legal department, appeared in the CBI court on Wednesday for Christian Michel, the alleged middleman in the Rs 3,600 crore AgustaWestland deal. Michel, who is a citizen of the United Kingdom, was brought to India late on Tuesday night following his extradition by the UAE in connection with the case. Appearing for Michel, the Congress leader had opposed the CBI’s plea for custody.

The Congress expelled the leader after news reports identified the Joseph as a Youth Congress leader. He appeared for Michel “in his personal capacity”, a party spokesperson said in a statement. The incident left the party red-faced on the last day of polling ahead of elections in Rajasthan and Telangana.

Verma And Asthana Were Fighting Like Cats, Government Tells SC

The government has told the Supreme Court that CBI Director Alok Verma and Special Director Rakesh Asthana were fighting like Kilkenny cats, making intervention necessary. Attorney General K K Venugopal made the observation when asked why the government intervened in the dispute and if it had the power to do so under Section 4(2). “Government was watching with amazement what the two top officers of the agency which commands the respect of the entire country were doing. They were fighting like Kilkenny cats. This seriously affected government and it had to act to put an end to this,” he said.

Venugopal told the apex court that Verma had been divested of all powers for now. He added that “there were large number of allegations (against Verma), some would come under Section 4(1) and some under Section 4(2)”. Earlier, Verma had claimed that the action against him would tantamount to a transfer and hence would require the prior consent of the committee consisting of the Prime Minister, the Leader of the Opposition and the Chief Justice of India.

RBI Note Shows Worst Of NPA, Credit Growth Problem May Be Over

The Reserve Bank of India’s analysis, which is based unaudited financial statements of Scheduled Commercial Banks, suggests that the worst of the non-performing assets (NPA) crisis might be over and that credit growth may also be back. In June and September quarter of the current fiscal year, the share of gross NPAs in total advances of both public and private sector banks has since declined according to the bank’s note.

However, the level of NPAs continues to much higher than what it was before the RBI forced banks to implement Asset Quality Review (AQR) in December 2015. Numbers also point towards a cyclic revival in the investment cycle in the economy.

Is The Most Right-Wing State Government In Indian History About To Be Voted Out? Despite a long list of impressive, relevant, and tangible interventions, the fate of the Vasundhara Raje government hangs in balance.

How Christian Michel Was Brought To India: From a chase that began in 2014 to bringing Christian Michel to Delhi, here’s how the alleged middleman in the AgustaWestland VVIP chopper scam was secured by India.

Has The Railways Significantly Improved Its Safety Record Under The Modi Government? Does the Railways deserve to be treated with unfair scepticism when it has registered a significant improvement in its safety record? A look at publicly available data gives a clear answer.

MPC Member Dholakia Breaks Ranks, Explains Why RBI Inflation Estimates Are Going Wrong: The MPC mandate should be changed, and so should the RBI’s way of forecasting inflation using an outdated CPI, with 2011-12 as base.