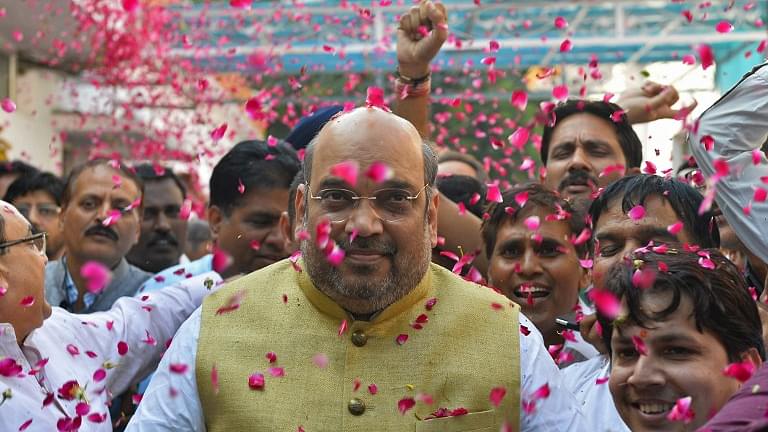 Gujarat Polls A Battle Of Pride, Says Amit Shah: Terming the upcoming Gujarat Assembly polls a battle of pride, Bharatiya Janata Party chief Amit Shah on Monday urged the workers to ensure an improved tally of 150 seats over the 129 it won in 2002 under the then chief minister Narendra Modi. “This is a battle of pride for us, as we want nothing short of three-fourth majority. As your president, I urge all party workers to give your 100 per cent. Do not sit idle after Diwali. I urge you to reach out to each and every citizen and spread Modiji’s message of development,” Shah said while addressing “Gujarat Gaurav Mahasammelan”. Slamming the Congress, he asked BJP cadres to completely “root out” the party from the prime minister’s home state. Speaking before Shah, Modi praised his trusted lieutenant as the “man of the match” for the BJP’s victory in the 2014 elections and also in the assembly polls held in Uttar Pradesh this year.

More Than 85 Per Cent Of Indians Trust Government: Pew Survey: A survey conducted by Pew Research Center has concluded that more than 85 per cent of Indian citizens trust the government. Interestingly, the survey, also found that the majority also support military rule and autocracy. "In India, where the economy has grown on average by 6.9 per cent since 2012, 85 per cent (of people) trust their national government," Pew Research said in a report based on its survey on governance and trust among key countries. According to the survey, 55 per cent of Indians support autocracy in one way or the other. In fact, more than one-fourth (27 per cent) want a "strong leader". India is one of the three countries in the Asia Pacific where people support technocracy (a government comprising an elite of technical experts).

Satyarthi Seeks National Tribunal For Children: The Union government was urged by Nobel laureate Kailash Satyarthi to establish a national tribunal for children that would oversee the effective and expeditious disposal of cases related to child abuse and assault. He was speaking in the presence of President Ram Nath Kovind in New Delhi at an event held to mark the culmination of his 'Bharat Yatra' spanning 11,000 kilometres across 22 states. "I humbly propose three things – legal deterrence, resources for children and preventive measures to be taken for the safety and security of children across the country," he said and added that to reap the benefits of India's democratic dividend, the country should have a "higher budgetary allocation" for children. Kovind said the yatra will be remembered as "one of the historic movements of social change, world over." Kovind urged Satyarthi to draw a "five-year road map" to help build an India that is safe for children, free of all abuse.

BJP Richest Party With Rs 894 Crore Assets, Congress Second With Rs 759 Crore: A report released by the Association of Democratic Reforms (ADR) said on Monday that the ruling Bharatiya Janata Party (BJP) is the richest among India’s seven national parties, having declared assets worth nearly Rs 894 crore in 2015-16. The report terms the Congress, which declared assets to the tune of Rs 759 crore in the same period, as a close second on the list. While the BJP was found to have declared liabilities of around Rs 25 crore during that time, the figure for the Congress stood at Rs 329 crore. The report was based on the declaration of assets and liabilities by national parties from 2004-05 to 2015-16. While assets include moveable and immovable properties, cash, vehicles, investments, deposits, loans and advances, liabilities comprise factors like borrowings from banks, unsecured loans and access to overdraft facilities.

India-Russia To Take Part In Anti-Terrorism Military Drill: The Indian and Russian armed forces will take part in a joint counter-terrorism military exercise in Russia from Thursday, the first such drill involving the tri-services to be held outside the country. The 11-day ‘INDRA-2017’ exercise, starting from 19 October, will be conducted at the 249th Combined Army Range Sergeevisky and in the Sea of Japan near Vladivostok. The Indian contingent will comprise 350 personnel from Army, 80 from Air Force, two IL 76 aircraft and one frigate and corvette each from the Navy. Russia will be represented by approximately 1,000 troops of the 5th Army, marines and ships of Pacific Fleet and aircraft from Eastern Military District. Exercise INDRA in its previous nine avatars has been conducted as a single service exercise alternately between the two countries. This year marks a major milestone as it has been upgraded to involve all the three services of the armed forces.

New Transparency Ranking Plan For Government Departments And Ministries: The Central Information Commission (CIC) is planning to rank the various government departments and ministries according to their transparency record. "The ranking will be of all ministries under the Centre which have done suo moto disclosures. This information will help the departments do better, especially in terms of information being provided under section 4 of the RTI Act," said chief information commissioner R K Mathur. The commission plans to come out with the ranking annually, added Mathur. Asked when it's likely to be unveiled, Mathur said, "Work on the ranking has already started. It should be available soon." Welcoming the proposed move, RTI activists said with over 60 lakh RTIs being filed every year, a ranking or ease of getting information from various ministries and departments is going to go a long way in helping people.

Trump Seeks End To Chain Migration: Seeking an end to chain migration, US President Donald Trump on Monday said it is essential for creating a system that prefers American workers. “Nobody knows the numbers about visa overstays. They are so out of control. We are going to take care of that,” he said in his Cabinet meeting at the White House. Trump said this is part of his immigration proposals sent to the Congress last week, which he said closes dangerous loopholes that enabled illegal immigration, and visa overstay. “Once a person comes then brings everybody in the family. We have to end this chain which is critical for creating a system that prefers American workers and American taxpayers first,” said the US president. Trump reiterated his resolve to build the wall on the border with Mexico.

Time For Auto Industry To Go All Electric: The government is putting together a standardisation programme for charging stations and swappable batteries for electric cars. It will benefit India, economically and environmentally, if the auto industry moves quickly to adapt to the inevitable disruption that is electric vehicles.

A Hazardous Prediction Exercise: Many attribute the economic slowdown to the effects of demonetisation. In the final year before elections, economic activity could be re-accelerating. But risks to this view are considerable.

The Imperfect Human Cogs In The Economy: Why it is useful to understand the contradiction between the positive and normative aspects of Nobel Prize winner Richard Thaler’s work on behavioural economics.

The Sinister Games Of The Church In Tamil Nadu: Always feeding wrong versions of history to impressionable minds, the Church in Tamil Nadu seems to have refined its methods this time.