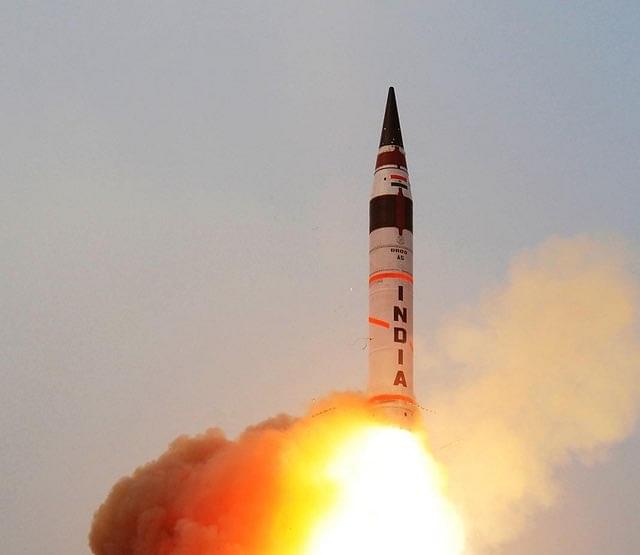 The long awaited fourth test of India’s Agni-V missile will mark a major milestone in the development of India’s Credible Minimum Deterrent posture (CMD). Expected in late 2015 or early to mid-2016, this test has been delayed for a number of reasons, technical and political. Now reportedly scheduled for either the last week of December (the 26th being mentioned as a possible launch date) or early January 2017, it is to be hoped that nothing prevents the test from being conducted and that it is successful when it finally does take place.

It is pertinent for readers to appreciate the quite dramatic shift that the eventual deployment of the Agni-V will mark in the evolution of the Indian nuclear arsenal. While the first two launches of the Agni-V – on 19 April 2012 and 15 September 2013 respectively – were of the standard Indian uncanisterised missile, following the patter set with the Agni variants I through IV, the last test on 31 January 2015 was of a canisterised system mounted on a road mobile platform. The planned fourth test will seek to validate the canister launch system as well as the missile’s performance.

Where the Agni-V is a potential game changer is in respect of the implications of its canister-launch system. This enables a missile to be kept in a state of readiness which permits rapid launching as well as offering the potential for reloading the launcher. By being placed on a road-mobile launcher, the missile will be much more survivable in the event of a preemptive strike. This is in contrast to the Agni II and Agni III, which are rail-mobile and thus less flexible. It is interesting to note that India has chosen to keep all of its land-based missiles on mobile launchers as opposed to basing them in underground silos. This has been done to enhance the survivability of these assets. Compared to the Agni-V, the Agni-I through IV variants are shorter ranged and are not encapsulated in a canister. This may be rectified in the case of the Agni-V as the missile lends itself to the canister-based format.

Having missiles in a ready-to-launch mode would invariably mean mating the nuclear warheads to the missiles. It has been the subject of much speculation – some informed and much uninformed – about whether India keeps its missile warheads mated or de-mated. While de-mating warheads is an option with missiles such as the Agni-I to IV, it is not practical with canister-based systems – or with ballistic missile submarines for that matter. The Agni-V thus portends a shift in India’s nuclear deployment strategy.

Defence Research and Development Organisation (DRDO) claims that the Agni-V has a range of “more than 5,500km”. This is a masterly example of obfuscation. Chinese analysts have speculated that the range of the Agni-V exceeds 8,000km and that India is understating the missile’s range deliberately. This assertion has found some support with Indian analysts such as Dr Bharat Karnad agreeing with the estimation and urging India to conduct a full-range test. Whether it is true or not, India should not be shy about declaring the full range of its missiles and testing them accordingly.

The upcoming test of the Agni-V is officially listed as a development trial – the final such test before production begins. However, it is suggested that the opportunity be taken to bring the Strategic Forces Command (SFC) into the trials process and even familiarise them with the production facilities at an early stage. Treating this test as a development-cum-user trial will facilitate faster induction of the Agni-V into the SFC.

Beyond the Agni-V tests, India must start articulating a clearer outline of what its CMD might envisage. This need not be made fully public but right now there is a deafening silence in respect of what CMD entails. Some degree of ambiguity is expected but now, with canister-based ready-to-launch missiles with mated warheads, it may be useful for India to shed a bit more light on its deterrent posture, if only to reassure its own citizens in the face of regular nuclear sabre-rattling from Pakistan and some thinly-veiled threats from China every time India defies Beijing.

Indeed, since India began producing the Agni-II back in 2002, there have been questions about production capacity and the rate of induction of missiles. When Dr Christopher, director general of DRDO indicated that as of 2015 DRDO had met only 20 per cent of the SFC’s missile production capacity requirement and was only now boosting production, eyebrows should have been raised. Indeed, Dr Christopher was very clear that Agni-I and Agni-II would be produced in greater numbers. Where does that leave production of Agni-III, IV and V? Furthermore, given that the range of Agni-III is deemed to be roughly that of Agni-IV, does production of the former make sense? It is reported that thus far, the three launches of Agni-III and two of Agni-IV have been undertaken entirely by the SFC. Does this mean that Agni-III and Agni-IV are in serial production? The answers to these questions have often been somewhat vague with terms like “inducted into service” being common. This does little to give any guidance on what capacity has been developed. That the Agni-I and Agni-II are continuing to be produced and the III and IV being deemed “inducted into service” suggests that multiple production lines exist. Moreover, how do production facilities intend to cope with the pending induction of the INS Arihant and its K-15 (and later K-4) missiles? The answers to these questions cannot, for obvious reasons, be made public, but it is hoped that all necessary consideration and priority is being accorded to developing and sustaining the requisite production capacity.

Furthermore, the SFC has given little indication of its functioning or its capabilities. Only a speech delivered by Shyam Saran, former foreign secretary of India, in 2013, shed some light on command, control and communications features and the chain of command. This was most welcome but it is suggested that some controlled communication from the SFC is necessary and indeed essential to demonstrate the maturity and credibility of the country’s CMD.

Thus, as the intended date for the fourth Agni-V test draws near, it is recommended that the SFC, in consultation with the government, release some information on itself and its functioning and capabilities. In trying to hide everything, there is the risk of the credibility of the deterrent being compromised or excessive ambiguity being raised. As a mature nuclear power on the verge of deploying fully mated warheads on ready to launch missiles, it behooves India to be a little clearer as to its current nuclear status without compromising essential secrecy. In the meantime, it is hoped that India pursues its missile testing programme as aggressively as possible, accepting neither caps nor restrictions on range, production, or deployment of ballistic and induct such systems as are required in as rapid a time as possible. The nation deserves nothing less.