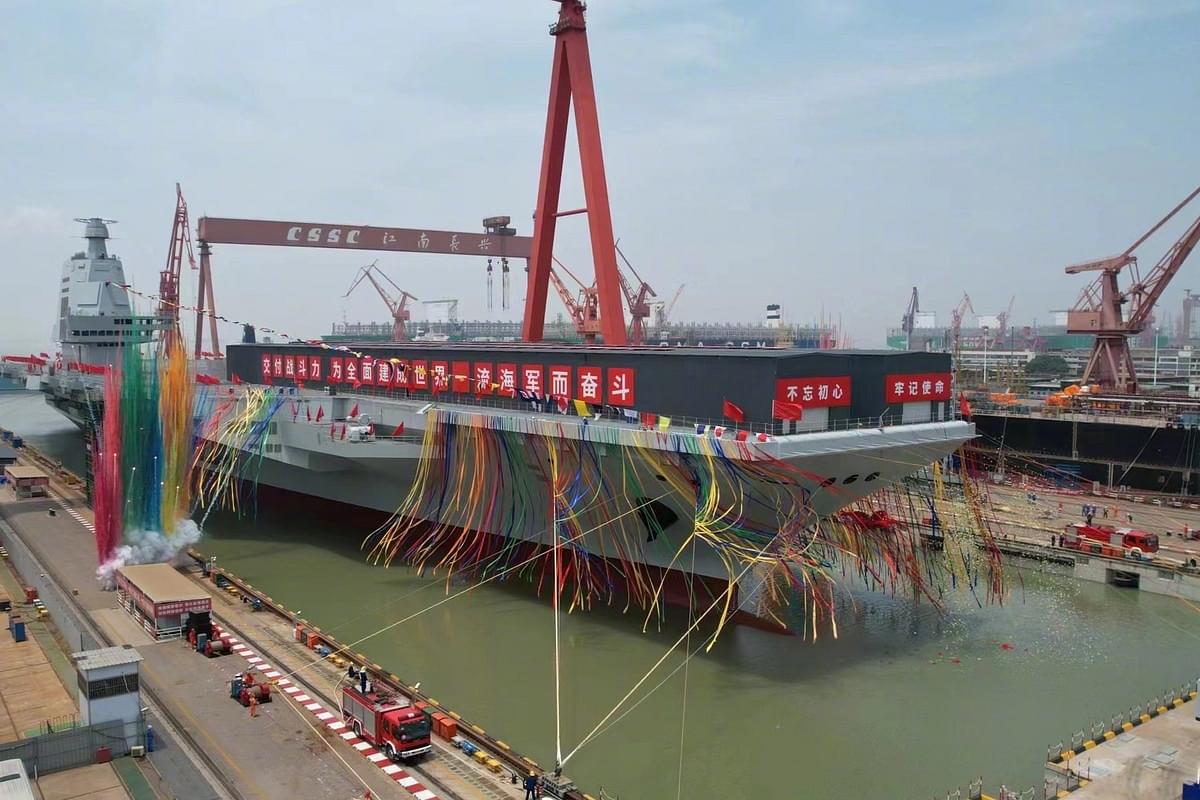 China has launched a new-generation aircraft carrier, its largest and most advanced, at the Jiangnan Shipyard near Shanghai.

On 14 June, satellite images from Planet Lab revealed that dry dock where it was being built had been flooded. The dry dock had been cleared in recent weeks, opening a path for the aircraft carrier to enter the Yangtze River. Earlier this month, China delayed the launch due to unknown reasons. It was likely to take place on 3 June, coinciding with the ancient Dragon Boat Festival and the 157th anniversary of the founding of Jiangnan Shipyard.

The Type 003 carrier, christened Fujian, is China's second indigenous aircraft carrier. It has been under construction since 2018. The carrier is not only larger than its predecessors but also represents a major technological leap for China and will significantly upgrade the power projection capabilities of the PLAN, now the largest Navy in the world in terms of the number of vessels.

The carrier, China's third, has a flat-top flight deck equipped with a catapult assisted take off but arrested recovery (CATOBAR) system to operate aircraft, an upgrade over the short take-off but arrested recovery (STOBAR) system used on the People's Liberation Army Navy's Liaoning and Shandong carriers and India's INS Vikramaditya and INS Vikrant.

Moreover, the CATOBAR system provides greater flexibility in carrier operations in terms of the type of aircraft that can be launched. Heavy platforms (aircraft that have a lower thrust-to-weight ratio) such as airborne early warning (AEW) aircraft and unmanned aerial vehicles can also be launched using the CATOBAR system. This is because it provides an extra push for aircraft with a catapult shot, unlike STOBAR, which enables aircraft to take off through engine thrust.

CATOBAR can also launch aircraft in unfavourable wind conditions and even when the carrier is stationary. In the case of STOBAR, wind on deck plays a critical role in launching aircraft as a certain level of carrier headwind is required. STOBAR also induces more stress on the airframe during take off, which reduces the service life of carrier-based aircraft.

"This design will enable it to support additional fighter aircraft, fixed-wing early-warning aircraft, and more rapid flight operations and thus extend the reach and effectiveness of its carrier-based strike aircraft," the Pentagon's annual report on China's military modernisation said in 2020.

Some experts have said that Type 003 has electromagnetic catapult technology, like the electromagnetic aircraft launch system (EMALS) on the Ford-class carriers currently being constructed for the US Navy. The system is a significant upgrade over the steam catapults used on Nimitz-class carriers.

If this is true, the introduction of EMALS on Type 003 would have been a major technological challenge for China — a conventionally powered carrier with an EMALS has not been built before. The US Navy carriers which use EMALS are nuclear-powered. In 2017, reports said China had achieved a breakthrough that would allow a conventionally powered aircraft carrier to operate an electromagnetic launch system.

EMALS enables faster take offs, among other advantages such as the ability to adjust the power needed to launch each aircraft and the capability to launch pilotless drones. On the Ford-class aircraft carriers of the US Navy, EMALS will allow 160 sorties per day in peacetime and a surge capability of 270 sorties during wartime. Compared to traditional steam catapults on the operational Nimitz-class carriers, this is an increase of nearly 33 per cent during peacetime and a 12.5 per cent increase during wartime.

China has also started working on a CATOBAR variant of the J-15, its deck-based fighter. Called J-15T, it features the modifications, including a strengthened nose landing gear, required to operate from a CATOBAR-equipped carrier.

"...development continues on...FC-31/J-31 for export or as a future naval fighter for the PLAN's next class of aircraft carriers," the Pentagon report said.

The carrier, however, is still years away from being operational. The warship will be fitted with electronics, accommodation facilities and weapons systems and undergo testing over the next few years.

In 2020, an unclassified report from the Office of Naval Intelligence of the US Navy said the aircraft carrier could be commissioned as early as 2024. However, with the launch of the carrier delayed due to the outbreak of Covid-19, the assessment may no longer hold true.

Also Read: Two Years Of Galwan Clash: How A New Route To Daulat Beg Oldie, An Alternative To DS-DBO Road, Is Taking Shape