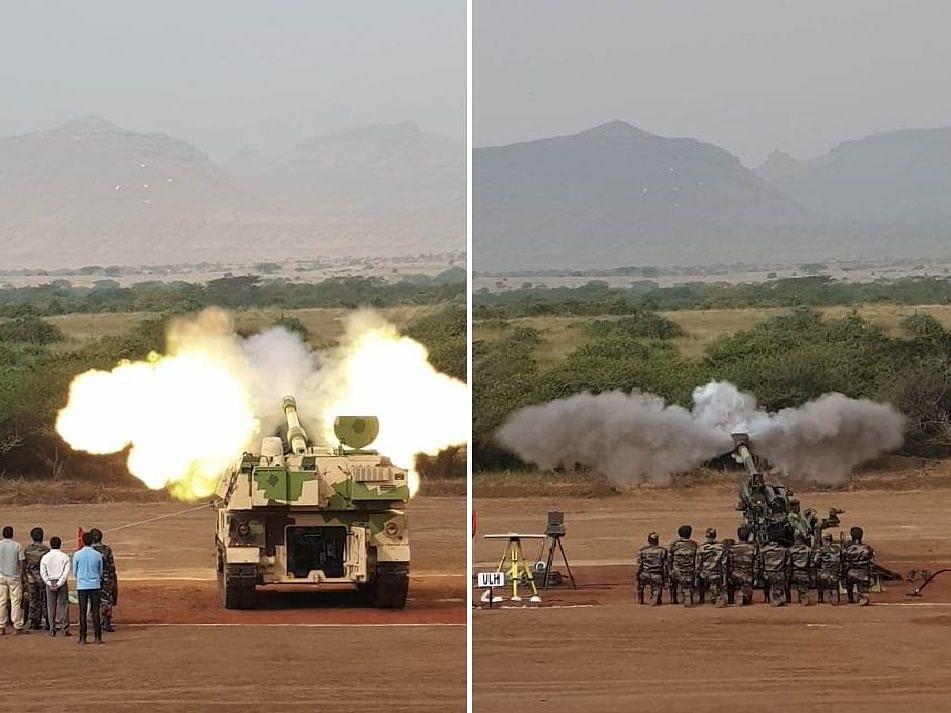 K9 Vajra (left) and M777 (right) artillery guns to be inducted by the army today. (@rahulsinghx/Twitter)

India’s effort to acquire new artillery, starting in the 2000s, has largely been a saga of numerous issued and cancelled tenders. But nearly 30 years after it got 410 Bofors-built Haubits FH77 howitzers, new guns are finally here.

At the Deolali Artillery Centre in Maharashtra’s Nashik today, the Indian Army has formally inducted two different 155mm artillery systems—the United States-built M777 howitzers and the South Korean-origin K9 Vajra self-propelled guns. Three M777s and 10 K9s have been handed over to the Army.

The purchase of these guns, among other efforts, is a part of the Field Artillery Rationalisation Plan of 1999, aimed at the acquisition of 3,000 modern artillery systems of various types, to equip its 220 artillery regiments by 2027. The Army was to acquire a mix of 3,000-3,600 155mm/39-calibre light-weight howitzers and 155mm/52-cal towed, mounted, self-propelled (tracked and wheeled) artillery guns under this plan, which made little progress in the decade and a half after its conception. It has, however, moved at firing speed in recent years.

The M777 howitzers, over 1,000 of which are in service around the world, are designed and built by BAE Systems, which now owns Bofors. India’s deal for the M777s has a major ‘Make In India’ component. Of the 145 guns sold to India under the United States (US) government’s Foreign Military Sales programme, 25 will be imported directly from BAE systems. Of these 25, five have arrived in India, and the remaining 20 will be delivered by May 2019. The remaining 120 will be assembled in India in partnership with Mahindra Defence Systems at a facility on the outskirts of Delhi. Hardware for the first India-assembled guns reportedly arrived in the country in August this year, and the facility will start delivering these by June next year at the rate of five guns every month.

In total, the Army will have seven regiments of M777s, each with 18 guns. Some of the 145 guns will be used for training purposes. The first regiment will be completed by October next year, and all the guns will be delivered in 24 months.

Multiple reports suggest the M777s will equip the new Mountain Strike Corps being raised by the Army, and the fourth artillery division for deployment along the unresolved northeastern frontier with China. The light weight of the guns makes their deployment to mountainous areas possible. These guns can be airlifted using the Chinook heavy-lift helicopters that India has contracted for. The choppers will be delivered to the Indian Air Force sometime next year, close to the Indian Army’s probable in-service date for the first M777 regiment.

The maximum range of the M777s is 24.7 km with unassisted rounds and 30 km with rocket-assisted ones. It is capable of delivering up to five rounds a minute under intense firing conditions and two rounds a minute at a sustained rate of fire.

Under the K9 Vajra deal, often seen as India’s fastest procurement agreement ever, the Indian Army will get 100 tracked, self-propelled artillery guns. While the first lot of 10 will be built in Korea, the remaining 90 will be assembled at a greenfield manufacturing line of Larsen and Toubro (L&T) at Hazira in Gujarat, which will also have a testing facility. While the first 10 have been handed over to the Army today, the remaining guns are expected to be delivered in 18 months from L&T’s manufacturing facilities.

L&T will build 13 sub-systems of the gun, including fire control system, ammunition handling system, muzzle velocity radar, and the nuclear, biological, and chemical system at its facilities in Pune, Talegaon, and Powai. It plans to deliver the next batch of 40 guns to the Army in November next year, and the last batch of 50 guns in November 2020. The Army will have a total of five regiments of K9, and the first regiment is expected to be in place by July 2019.

The K9s have a maximum range of 28-38 km, are capable of firing three rounds in 30 seconds in ‘burst’ mode, 15 rounds in three minutes in ‘intense’ mode, and 60 rounds in 60 minutes in the ‘sustained’ mode, reports said. It is also capable of direct firing with a range of 1 km.

The K9s will boost the firepower of Army’s strike formations in the plains and the desert. The gun is ideally suited for mobile tank warfare. The Indian Army plans to induct these guns into its mechanised strike corps to provide close fire support during deep thrusts into enemy territory. The T-90s, main battle tanks of the Indian Army, outpace the artillery guns currently in use, towed by wheeled vehicles. As a result, the tanks are forced to engage the enemy during their advance without fire support from artillery. Because the K9s are mounted on a tracked vehicle, they are capable of keeping up with tanks during the advance to provide fire support.

Other Developments Related To Artillery Modernisation

Apart from the induction of these guns, India is also developing multiple artillery systems indigenously. These include the 155-mm/52-calibre Advanced Towed Artillery Gun System (ATAGS), the 155mm/45-calibre Dhanush howitzers, and the Mounted Gun System (MGS), among others.

The ATGS, which is expected to replace the Bofors guns over the next decade, has been designed from scratch by the Defence Research and Development Organisation. Two prototypes of the gun underwent high-altitude trials in Sikkim at 12,000 feet earlier this year. The prototypes were built by Tata Power SED and Bharat Forge. After successful trials, DRDO has ordered six more guns, and the artillery system will be delivered to the Army for further testing in 2019.

The Dhanush gun, developed by the Ordnance Factory Board using blueprints supplied by Bofors as part of the 1986 purchase, cleared firing trials in severe cold conditions of Sikkim and Leh, the hot and humid weather of Balasore in Odisha, the Babina range in Uttar Pradesh’s Jhansi, and in the desert heat of Pokhran. The Army has received the first batch of six Dhanush howitzers.

The MGS, developed by the Gun Carriage Factory, Jabalpur, was unveiled at the Defexpo in Chennai this April. These guns, mounted on high-mobility trucks, are the fifth type in a series of howitzer requirements projected in the Field Artillery Plan. The Army has projected a requirement of 814 MGS howitzers. Reports suggest the system will undergo trials sometime this month.

The induction of M777s and V9s will provide the Army with immediate relief. And with three indigenous initiatives also making progress, India seems well on its way to plug the critical gaps in the Army’s firepower.