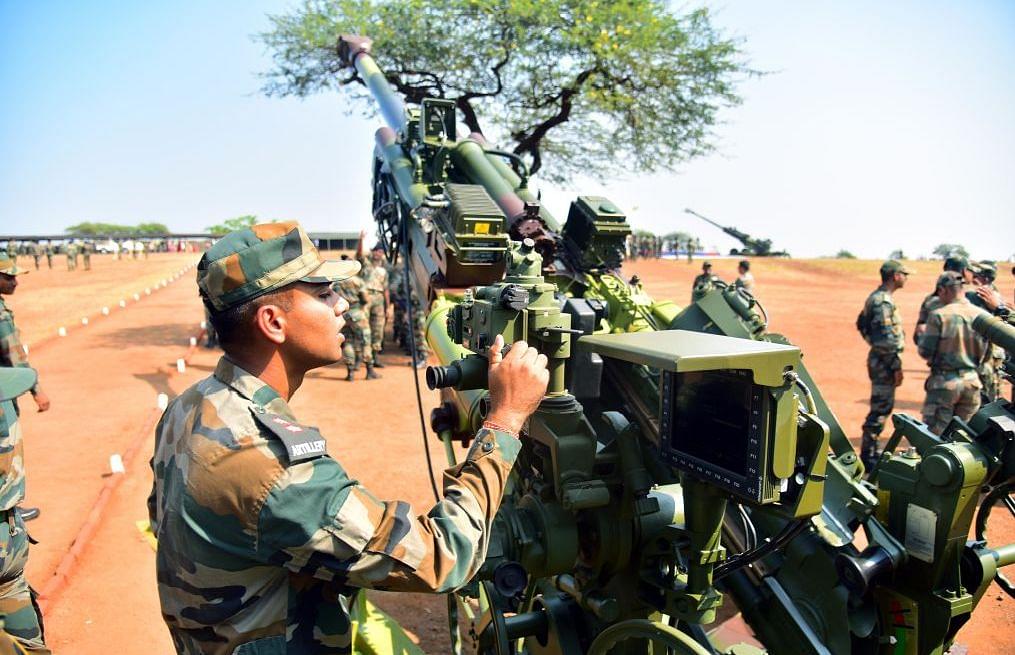 The last nearly five years have seen India’s military gain more muscle than it ever has in the past. From fighter aircraft and heavy artillery to anti-submarine aircraft and stealth frigates, India’s armed forces are being strengthened like never before. The Narendra Modi government has also drastically improved the living conditions of soldiers, especially in the remote and inhospitable areas. What’s more, many of these armaments and equipment are being manufactured indigenously under Prime Minister Narendra Modi’s flagship ‘Make In India’ initiative.

L&T bagged the Rs 4,500 crore contract for manufacturing self-propelled howitzers and signed a technology transfer pact with South Korea’s Hanwha Land Systems, the original manufacturer of the K-9 thunder, of which the Vajra is a variant. The Vajra is specially designed to operate in desert areas. Indian artillery has been suffering from a severe disadvantage against Pakistan for decades due to lack of self-propelled field guns.

The US supplied Pakistan with 115 M109A5 howitzers in 2009 and despite repeated pleas to the earlier United Progressive Alliance (UPA) government, nothing was done to meet Indian Army’s urgent requirement for field guns. After the National Democratic Alliance (NDA) came to power, it accelerated the process of manufacturing these guns indigenously through a technology-transfer deal.

Induction of US-made M777 howitzers into the army will start from March this year. The Rs 5,000 crore government-to-government deal for supplying 145 of these howitzers was signed in November 2016 and the first five guns have already reached India for test-firing and training. The first lot of 25 M777 howitzers will come in ready-to-use condition while the rest would be assembled by Mahindra Defence, which will be adding value to the guns. These are the first field guns being inducted into the Indian Army after three decades. The proposal to acquire these guns had been hanging fire since 2010, thanks to a tardy acquisition process under the UPA and a flip-flop on the decision to acquire them.

In May 2014, the NDA government agreed in principle to buy the howitzers from the US. But thanks to the long delay caused by the UPA government’s indecisiveness, the cost of the guns had escalated by then. The deal was re-negotiated and, in keeping with the ‘Make In India’ programme, it was also tweaked to ensure that a majority of the guns are assembled in India. This, says Mahindra Defence, will enable the private sector entity to acquire crucial knowhow to indigenously manufacture such guns in future. Significantly, these guns will use Indian-made ammunition.

The M777 howitzers are primarily meant to shore up defences along the mountainous India-China border and will be transported by Boeing CH-47 Chinook heavylift helicopters. The deal for 15 Chinook and 12 Boeing AH-64 Apache Attack Helicopters was signed in July last year and deliveries will start from March this year. The induction of these helicopters will be a game changer for India’s armed forces, which had to rely on old Russian Mi-17 medium lift helicopters for rapid induction of forces and an obsolete squadron of Russian Mi-26 helicopters. The only attack helicopters India has are two squadrons of Mi-35 helicopters, which were used by the erstwhile Soviet Union during its occupation of Afghanistan in the 1980s.

The $3 billion (Rs 21,272 crore) deal for the purchase of these helicopters has a 30 per cent offset clause and will bring in business worth over $1 billion for the Indian defence industry. In this case, too, price negotiations with Boeing dragged on for eight long years and was finalised in early 2013. But the then UPA government did not sign the deal, thus denying these much-required helicopters to the country’s armed forces. It was the NDA government that finalised and fast-tracked the deal. The NDA government also agreed to the army’s request for the Apache attack helicopters for the army’s own aviation wing and ordered for six additional Apache AH-64E attack helicopters worth Rs 4,168 crore in August 2017.

The 22 Apache AH 64D Longbow helicopters India will get are one of the most advanced multi-role combat helicopters with all-weather and night-fighting features, ability to track upto 128 targets in less than a minute and engage with 16, besides joint digital operability, improved survivability and cognitive decision aiding, stealth characteristics, advanced sensors and beyond visual range missiles. Indian industry partners like Dynamatics and Tata Advanced Systems are supplying major components of these helicopters. The Apaches will be armed with AGM-114 Hellfire air-to-surface anti-tank missile, the AIM-92 Stinger air-to-air missile and the AN/APG-78 Longbow Fire Control Radar for detection, location, classification and prioritisation of tactical targets.

After years of wait, the Indian Army will finally get the Advanced Medium Range Surface-to-Air (MRSAM) missiles it has been asking for many years. In January last year, the public sector Defence Research and Development Organisation (DRDO) signed a Rs 17,000 crore deal with Israel Aerospace Industries (IAI) for making the MRSAM missiles that can shoot down ballistic missiles, fighter jets, drones, surveillance aircraft and AWACS (Airborne Warning and Control Systems) aircraft and attack helicopters from a range of around 70 kilometres. In May 2015, the army had inducted the indigenously-developed supersonic surface-to-air missile Akash, which is capable of targeting enemy helicopters, aircraft and UAVs from a range of 25 km.

The NDA government also fast-tracked an additional $777 million deal between IAI and the public-sector Bharat Electronics Limited (BEL) for making Long Range Surface-To-Air Missiles (LRSAM) air and missile defence systems for seven Indian Navy vessels in October last year. The negotiations for this went on interminably during the UPA regime. This LRSAM is part of the formidable Barak 8 family of missile defence system that has already been inducted into the Indian Navy.

The LRSAM, developed jointly by DRDO and IAI in partnership with private defence manufacturers of both the countries, is another shining example of the success of Prime Minister Modi’s ‘Make In India’ initiative. The first LRSAM was inducted into the Indian Navy in September 2017 and was successfully test fired from INS Chennai a few days ago.

The NDA government also displayed firm resolve in the face of threat of sanctions by the US and signed a deal with Russia to procure S-400 Triumf Missile Systems worth $5.4 billion (Rs 38,000 crore). And it was the US that blinked and granted a waiver to India. The advanced long-range surface-to-air missile defence system, capable of destroying hostile aircraft, missiles and drones at a range of 380 km, will be a much-required force multiplier for the IAF that is now operating with just 31 fighter squadrons in place of the sanctioned 42. In two years’ time, when the S-400 missile system is inducted, India will also have its full complement of 272 Sukhoi-30MKIs, the first Rafale squadron, besides the Tejas squadrons that would have entered service.

It needs to be mentioned here that beside the severe shortage of fighter aircraft, which successive Congress governments at the Centre failed to address, India’s radar network has insufficient range and cripplings gaps in coverage. The IAF’s existing Soviet-era and Russian-origin surface-to-air missiles (SAMs) such as the Pechora SAM-3 and the OSA-AK SAM-8 have inadequate ranges of under 35 km. The S-400, along with the (Indo-Israeli) MRSAM, the Akash SAM (with an upgraded strike range) will address this shortage.

The Indian Navy has been asking for additional Boeing P-8 Poseidon anti-submarine and surveillance aircraft, but the UPA government had turned down its requests. The Modi government cleared the purchase of four more of these aircraft in July 2016. The navy already has eight of these aircraft, but four more are urgently required to plug gaps in maritime surveillance. Armed with Harpoon Block-II missiles, MK-54 lightweight torpedoes, rockets and depth charges, these sensor and radar-packed aircraft are said to be the country's ‘intelligent hawk eyes’ over the Indian Ocean Region (IOR) that is increasingly getting militarised.

Early into its current tenure, the Modi government gave the green-light to the construction of seven stealth frigates and six nuclear-powered submarines. The six stealth frigates being made under Project 17A and the submarines will bolster India’s overall deterrence capability in the Indian Ocean Region. In late October last year, India signed a deal with Russia to acquire two Krivak III-class stealth frigates for $950 million. In October 2016, the two countries had signed another deal for four such frigates, two of which will be built in India through a technology transfer arrangement.

And then, of course, there is the $ 8.7 billion deal signed by the Modi government in September 2016 for 36 Rafale multi-role fighter aircraft. The UPA government had delayed the deal and then announced that there was no money for purchasing the fighter jets urgently required by the IAF. The NDA government decided to meet the IAF’s immediate need by ordering for 36 of these fighter jets. Apart from these, the NDA government has also hastened the induction of the military transport aircrafts C-130J ‘Super Hercules’ and the C-17 Globemaster III.

After a nine-year wait, the Indian Army has finally started getting bullet-proof jackets. A Rs 639 crore deal to supply 1.86 lakh bullet-proof jackets was signed between the Ministry of Defence (MoD) and private sector SMPP Private Limited last year and the delivery of the jackets has commenced. After a wait of more than two decades, the army has started receiving bulletproof helmets. The order for 1.58 lakh ballistic helmets was signed with Kanpur-based private-sector MKU Industries in 2017. The Congress governments in the past had simply sat on the army’s repeated requests for these helmets and jackets.

Indian soldiers are likely to get 72,000 Sig Sauer Sig-716 rifles to replace the INSAS rifles while UAE’s Caracal CAR 816 carbines. The process of signing these deals in under way. In this case, too, the armed forces’ demand for high-quality rifles was ignored by the UPA government.

Apart from all these equipment and arms, contracts have been signed with Indian companies for supplying ‘extreme cold weather clothing systems’, sleeping kits and other necessities to the army. Indian companies have been contracted to supply prefabricated structures for housing soldiers in inhospitable conditions. The DRDO has been successfully pushed to make high-protein and nutritious self-heating meal packets for soldiers and some private Indian companies are also bidding for these requirements.

All of these measures initiated by the Modi government will strengthen India’s defences and make the country’s military a stronger, more well-equipped and, thus, a more efficient, fighting force.