India Is Testing Four Missiles This Month, And There’s Much More To It Than Just The Number 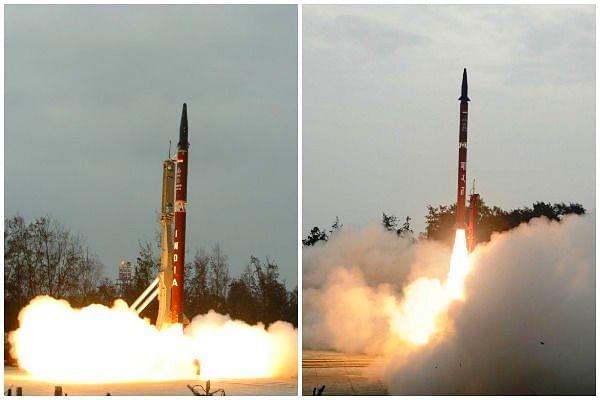 When INS Arihant, India’s only in-service nuclear submarine (ballistic missile submarine or SSBN) completed its first deterrence patrol in November 2018, the country achieved a significant milestone — operationalisation of the triad, the capability to launch nukes from land, air and water. However, this was largely symbolic, and one of the reasons behind this is the missile the boat carried.

The Arihant, during the deterrence patrol, was armed with Sagarika K-15 (or B-05) Submarine Launched Ballistic Missiles (SLBMs), of which it can carry 12. The K-15 is said to have been operationalised after being “secretly test-fired back-to-back” from INS Arihant in August 2018, just ahead of the deterrence patrol.

Also, cities in the Chinese mainland would remain outside the range of the missile even if the boat was at the north-eastern edge of the Bay of Bengal. Therefore, in the event of a crisis with Beijing, New Delhi would not have the option of threatening a nuclear attack on a target of consequence in China.

The next in the K-series of missiles, the intermediate-range K-4, is the solution. It will be the first of the four missiles to be tested this month.

With the 3,500-km range the K-4, INS Arihant and future SSBNs will be able to target parts of China, including Beijing, and all of Pakistan, from the northern parts of the Bay of Bengal. Not ideal, but better than the K-15.

The test, scheduled for 8 November, wouldn’t be the first launch of the K-4 missile. Testing began in 2010 from a submerged pontoon, and the missile was fired from INS Arihant in 2016 “in full operational configuration”.

However, this test of the K-4 is important because a recent launch, conducted from a submerged platform in December 2017, had ended in a failure.

While INS Arihant can carry four K-4 missiles, future Indian SSBNs will be capable of carrying at least eight K-4s or other long-range SLBMs.

The second missile to be tested this month will be the BrahMos. Two versions of the missile will be tested on 11 November, one from a land-based platform and the other from a fighter aircraft.

The BrahMos tests are significant for three reasons:

When India and Russia decided to develop the BrahMos, it was decided that India will supply the navigation system and fire control system and Russia was to provide the engine and seeker. India faced stiff resistance from Russia when it decided to replace the Russian system with an indigenous seeker.

Two, the air-launched BrahMos, which will be tested from Su-30 MKI, gives the Indian Air Force (IAF) a stand-off strike option. Su-30 MKIs armed with BrahMos can strike enemy targets from a distance sufficient to evade enemy fire, and in some cases from within Indian airspace or over international waters. (Read: Why Su-30 MKI Plus BrahMos Will Be A Potent Weapons Package)

Three, reports say, the air-launched version of the BrahMos missile is “expected to go into production after the test against sea-based target”.

The other two missiles being tested this month are the nuclear-capable Agni-II and Prithvi. While the launch of Agni-II is scheduled for 16 November, the test-firing of Prithvi is likely to take place on 20 November.

The test of Agni-II, which has a range of over 2,000 km, becomes important due to the missile’s failure during the user-trial by the Strategic Forces Command (SFC) in May 2017. The missile was successfully tested in February 2018.

A series of improvements, mostly related to the missiles guidance and accuracy, have been made over the past few years. It is not known if the test is being conducted to validate a new improvement or is simply a user trial.

The last missile to be tested this month is the 250-km range version of Prithvi used by the IAF. The IAF’s version of the missile has in its range most of Pakistan’s major cities and military sites.

Both the Agni-II and Prithvi missiles will be test-fired by the SFC.