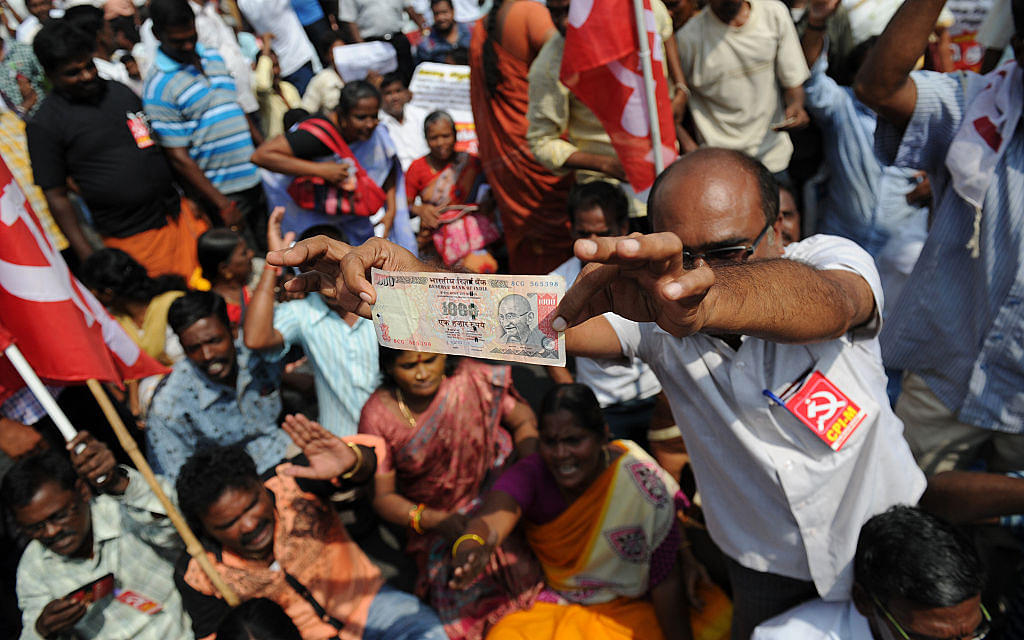 A man displays a Rs 1,000 note at a protest against the withdrawal of high-value banknotes from circulation (ARUN SANKAR/AFP/Getty Images)

Over this 50-day period, several economists have denounced demonetisation as poor economics, so much so that reading them has made us feel like we were experiencing mass famine. This, despite the fact that even the hard, early days were nearly-incident-free in spite of the enormity of the scale of operations.

These traditional, orthodox economists argue in the same breath that, while
demonetisation would hardly yield any effect on black economy, it would destroy the white economy. Somewhere, this doesn’t add up. But this is not their fault; after all, traditional economics teaches the existence of "money neutrality" -- money is critical for an economy to function, but has no other major effect on the real economy. So they selectively use the "critical" classification for white economy (hence destruction) and "not important" classification to black economy (hence saved).

But economists practising this kind of economics have been proved wrong, and often; unfortunately, the world has paid for some of their mistakes.

But enough about economics that doesn't work. Let’s talk about that which works.

One set of theories that has gained value after the 2008 crisis is the Minsky financial-economic theories. Writing in 1976, Hyman Minsky, an American economist and a distinguished scholar at Levy Economics Institute, came up with a model of capitalism called financial instability hypotheses. It was an extension of the original works of John Maynard Keynes, and is markedly accurate in predicting financial economic cycles, booms and busts. So accurate that Paul McCulley, former managing director of PIMCO, christened such an occurrence as the Minsky moment. The 2008 crisis was the biggest Minsky moment of them all.

Credit is money. That is why companies don't need to carry cash everywhere for purchases. Most purchases happen in the form of credit settled through a business process. Even you can buy whatever you can in cash or credit (e.g., credit card, your khata at the kirana store or a village vendor extending credit).

This total money is not assumed to be neutral, as by traditional economists, but has a direct impact on prices and economic production. More new credit generated leads to more demand for goods in the economy and more economic growth and employment -- a well-established fact.

This should really not be that surprising given how historians and anthropologists, like David Graeber of the London School of Economics, have found that money originated in the form of a "credit tablet" -- similar to bank drafts -- rather than through barter as taught in Economics 101.

But what has this endogenous money/credit got to do with demonetisation? Actually, everything.

Credit is financial money that differentiates black economy from a white/cash white economy. Black economies have very low credit. When was the last time you paid bribe in credit? Or paid dowry in credit? Or bought drugs on credit? You may have bought some regular ration on and off on credit, though.

The illegality of black economy ensures that credit can't thrive in it. On the other hand, credit thrives in a white economy and is the main reason why economic growth occurs through companies’ borrowings.

Currency notes are important as well, being the last-mile consumer purchase system, but they are significantly malleable with credit, and for the short term, credit can expand and cover currency loss. That is why you see different countries with varying currency circulation, from ~4 per cent of GDP in Brazil to ~12 per cent of GDP in India, depending on credit proliferation.

This difference is what makes taking cash out akin to sucking the blood out of a black economy. With no or hardly any credit to cushion this sudden loss of currency, black economy GDP goes almost to zero. The old, accumulated assets of black marketers and bribe-takers still remain, but no new assets are being generated because the blood in the form of cash required has been sucked out.

The ubiquitous nature of Rs 500 and Rs 1,000 notes had ensured that hawala operators and currency providers of black economy had amassed massive amounts of cash to supply as and when required (for e.g., paying crores of rupees of bribe tomorrow).

The black economy in India was extremely well-greased. This grease has been removed completely in the short term. Amassing the stack to similar levels in the era of ATM withdrawal limits will surely take a much longer time. Perhaps, some leakages could occur through bankers, but even then the level of grease as provided by old Rs 500 or Rs 1,000 notes wouldn't exist for some time to come.

And all this is without any further steps taken by the government. This same situation is also playing out for fake-currency and terror networks. Look at the case of Kashmir or Naxals or weapons purchase -- all these are down to zero.

White economy, including cash-based white economy, would have the credit cushion for this currency loss. Credit and working capital cycle will be expanding throughout the economy to cover for the currency loss. In fact, even you will participate in this credit expansion if you take credit from your kirana shop in the short term till you get cash. He in turn will take credit from the distributor, who would take it from the companies and so on, riding the lack of currency notes.

This is the reason why food is still reaching your plate, even though 86 per cent of money has been taken out of the economy in one go, otherwise a stuff of nightmare for traditional economists.

Indeed, except for the urban poor, who have the most difficulty in assessing credit, this might explain the absence of large-scale anger even after 50 days of cash crunch. In fact, a good part of rural India spends much of their year in credit. Lack of money is not really that much of a change for them.

Now, this is not to say that the white economy has not suffered or will not suffer at all. The initial adjustment period, remonetisation to facilitate last-mile cash activity and so on -- all of this will have an effect for a couple of months. There would be a deceleration of growth for sure, and the government should take every possible measure to complete remonetisation. But this is no catastrophe. Credit is deeply ingrained in the Indian economy, from big firms buying large assets to kirana shops and village vegetable vendors. This, combined with the government’s digital push, should provide enough cover for transition to new notes.

Thankfully, the economy has already reached around 4 per cent of remonetisation, a level at which the whole economy of Brazil runs. The black economy, on the other hand, will be reeling under a severe crisis for some time to come. This crushing of black economy will happen despite a major chunk of old currency notes coming back to the banks, as black economy requires cash in hand to function; cash in the bank is of no use.

Apart from crushing the black economy, demonetisation has more good news for the white economy in the medium-to-long term. The major one, arguably as important if not more than black money destruction, is the swelling of bank deposits. India had a currency note circulation of around 12 per cent of GDP prior to demonetisation. It is expected that between Rs 1-2 trillion of old notes will not come back to the banks, and will be destroyed. This in itself should lower the currency circulation in the economy by 1-2 per cent of GDP. But this is not the whole story. Cash that has once returned to the banks will have a lesser propensity to come back in circulation, and this should lead to a 1-2 per cent additional decrease in circulation.

In the end, demonetisation can lead to a final note circulation figure between 8-10 per cent of total GDP. This lowering of money circulation by 2-4 per cent of GDP will be added to the deposit base of banks. Since this is a cost-based deposit and banks have to give interest on it, they would really like to lend this money as soon as possible, generating new credit. Remember the importance of credit; it plays here again. This credit, generated in multiplier to the increased deposit base, can be a big boost to the economy. And if this lending is used in a targeted way (‘To Reap What You Lend’, 23 December, the Economic Times), it’s an icing on the cake for economic growth.

It will take some time for the demonetisation dust to settle down before lending can happen. So in the next couple of quarters, we are likely to see low growth figures and economy decelerating. This would be especially true for consumer-based industries, where purchases are largely in cash. But this should drastically change once lending starts to happen. Fuelled by this credit growth, the white economy should not only grow organically (new infrastructure, roads and so on), but will also rise to capture the space vacated by black economy. There is a fair chance we might end up with 10+ per cent growth, highest on record, by the end of next year. For this to happen, the key numbers to watch out for going forward - for economists as well as the government - would be the final money circulation figure and the monthly credit growth.

From the looks of it, it would seem that Prime Minister Modi is better versed in Minsky than traditional economists. Not very surprising; the Indian trader community has had a fully functioning credit market since ages, and endogenous money is in their blood. In fact, among the oldest of credit tablets -- the ones that later emerged as money -- have been found in India. Some, a small silver bar punch-marked with official symbols of a kingdom based in Takshila, date back to a time as old as 540 BCE.

Vidhu Shekhar is a Financial Economist and Asst. Professor of Finance at SPJIMR.