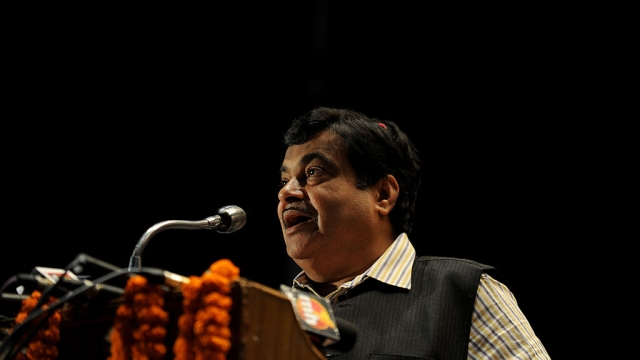 Nitin Gadkari heads a ministry - road transport, highways and shipping – that is critical to the economy but has also traditionally left its ministers worrying about funds.

Gadkari, on the other hand, is quite sanguine about it all. “I am not dependent on finance ministry resources,” he insists.

As he completes two years in office, Gadkari is trying to get an Infrastructure Development Corporation in place; a cabinet note has already been moved, he told Swarajya in an interview. The Corporation, says Gadkari, will be modeled on the Power Trading Corporation and will access funds from domestic and global sources.

But wasn’t the National Infrastructure and Investment Fund (NIIF) meant to do that? “We will tap NIIF funds also. We will also bring in foreign funds,” says Gadkari.

He’s relying on leveraged financing and has got his math all worked out. To his Rs 55,000 crore budget for roads, he adds toll income of Rs 10,000 crore, which he plans to securitise for 15 years, netting him Rs 1.30 lakh crore. Then he plans to get another Rs 1 lakh crore by securitizing 101 projects done with government funding. He also has government permission to issue tax exempt bonds of Rs 70,000 crore. And then there will be toll that is earned on the roads built with all this money. He may not even resort to the bonds. “Pension funds, insurance funds are prepared to invest in my projects. I will do a tripartite agreement and will give them 6-7 per cent returns.”

With all this money, he plans to go on a major infrastructure building drive and he reels off lists of projects without pausing for breath. “I am not among those politicians who make tall claims. I say what I mean and I am doing it. That is my 100 per cent track record,” he says, pointing out that as Maharashtra’s PWD minister in the late 1990s, he took Rs 5 crore from the state government, used it to raise Rs 4,000 crore, implemented projects worth Rs 80,000 crore and returned the money.

His list of plans for roads is even longer. The length of declared national highways is to be increased from the current 96,000 km to 2 lakh km (1.5 lakh km has already been declared as national highways). He has reduced the traffic threshold for four-laning of two-lane highways. Earlier, only highways logging more than 25,000 PCUs (passenger car units) were taken up for four-laning; he reduced the requirement to 10,000 PCUs.

Gadkari has cleared projects worth Rs 2.5 lakh crore. Of the cost of construction, 1 per cent each will be used for tree plantation and beautification and another 1 per cent for road safety. He’s pushing for the construction of 1,300 roadside amenities; tenders for 60 are already out. As many as 300 spots have been identified for parking plazas, hotels, restaurants, petrol pumps, service centre fruit and vegetable stalls, handicraft and handloom. These will also have a helipad and a hospital. Then there are plans for a logistics park next to bypasses of major cities. He has suggested to Delhi chief minister Arvind Kejriwal that godowns within the city be shifted to eastern and western bypasses. “This will bring down traffic congestion in the city considerably.” Kejriwal, he says, is receptive to the idea.

“All over country, expressways and highways are being built. This will boost employment. An investment of Rs 1 crore will provide jobs for 70 people. I am planning to put in Rs 2.5 lakh crore, consider how much employment that will generate,” he says and again repeats, “hava mein baat nahin karta (I don’t make tall claims)”.

Gadkari took over a roads sector that was deep in crisis; 403 projects worth Rs 3.85 crore were stalled, the public-private-partnership (PPP) model was not getting any response, banks were reluctant to lend to the sector and roads were being constructed at the rate of 2 km a day.

Today, Gadkari asserts, only 14-15 projects worth Rs 30,000 crore are stuck; investors are beginning to return; and 25 km of roads are being built every day, “which is the highest-ever record”.

But his predecessor Kamal Nath had also claimed that roads construction would touch 20 km a day and couldn’t achieve it. “Forget about what anyone else has said. Nitin Gadkari has said. If anything I have claimed has not materialized you can make breaking news out of it.”

But he too had initially claimed achieving 30 km a day. “Yes, I had given a target of 30 km a day and have not been able to achieve it. I have brought it to 25 km, but this is the biggest record to date. Next year 26 May, my target will be 40km.” Isn’t that being over-ambitious? “One should be over ambitious. Because I said 30 km a day, 25 km has been achieved. If I had said 10 km, we would have done just 8,” he laughs

Of the 403 stuck projects he inherited, 43 were terminated, but have been re-tendered and many have started. Of the current lot of stalled projects, two or three have been terminated and three or four more will be.

Gadkari has got over the disinterest in the PPP model by coming up with the hybrid annuity model. He is firm that no project will be bid out without the government acquiring 80 per cent of the land (against the previous government’s 10 per cent). The government will also take responsibility for shifting of utilities and all the environment and forest clearances. Seventeen projects (including four of the re-bid projects) have been bid out on this model and work has started on several. Another ten projects have been allotted on the new toll-operate-transfer model, but the response to this is still a bit low. Banks, he rues, are still a bit wary of lending. “Financial closure is taking a year. I have apprised the finance minister about it,” he says.

What about the Swiss Challenge method of bidding out projects which this government has been talking about but which the Vijay Kelkar committee on revisiting and revitalizing PPPs warned against? Gadkari is quite ready to re-look this. “There is no need for Swiss challenge in the roads sector; we are getting a lot of response. If we don’t get interest, then we can take the EPC (engineering, procurement, construction) route.”

Investor interest is returning, he claims. He gives the example of Larsen & Toubro which, soon after he took over, said it was withdrawing from the roads sector and paid 1.5 per cent penalty to terminate a project. “Now they are doing nine projects of Rs 15,000 crores. Those who ran away are coming back,” he grins.

What Gadkari is not happy about is the fact that the ministry is directly implementing more roads projects (4000 km) than the National Highways Authority of India (NHAI). “I went to NHAI one day and told them this is not correct. I am giving you target of 10,000 km, strengthen your systems.”

Gadkari’s pet theme, however, is to move goods and people over water – using India’s many rivers and 7,500 km coastline. He points out that the cost of transporting one tonne of freight per kilometer over water is 20 paise, over railways is Re 1 and over roads is Rs 1.50. Water-based transport is just 3.5 per cent of passenger and goods traffic in India, he says, against over 40 per cent in China, Japan, Korea and Europe. He has already got parliament sanction to make 101 rivers as waterways, and work on three projects worth Rs 4000 crore is already under way. Six new sea ports are planned and work on three will start this year. Coastal shipping of goods has also started. “I am confident with coastal shipping and waterways, the logistics cost can come down from 18 per cent to 12 per cent. If that happens, our exports will increase 1.5 times. This will boost employment.”

Why is Gadkari chary about corporatisation of ports? When finance minister Arun Jaitley spoke about corporatisation, Gadkari was quick to talk about modernization instead. Was this not necessary to make ports more efficient? The trade unions, Gadkari points out, are opposed to corporatisation. “I didn’t want a confrontation.” Instead, he says, he introduced all the elements of corporatisation when amending the Ports Trust Act. “That is why for the first time ever, we have earned Rs 6,000 crore profit.

Gadkari also has big plans for clean and affordable fuel to run the transport sector – ethanol, bio-diesel, bio-fuel, electricity – and talks about a project in Nagpur where 100 buses are being run on fuel extracted from toilet sewage.

“We don’t have technology problem, we don’t have resources problem. We don’t have land acquisition problem,” he insists. He only feels hemmed in by the slow pace in government. “How to reduce time is my biggest challenge.”