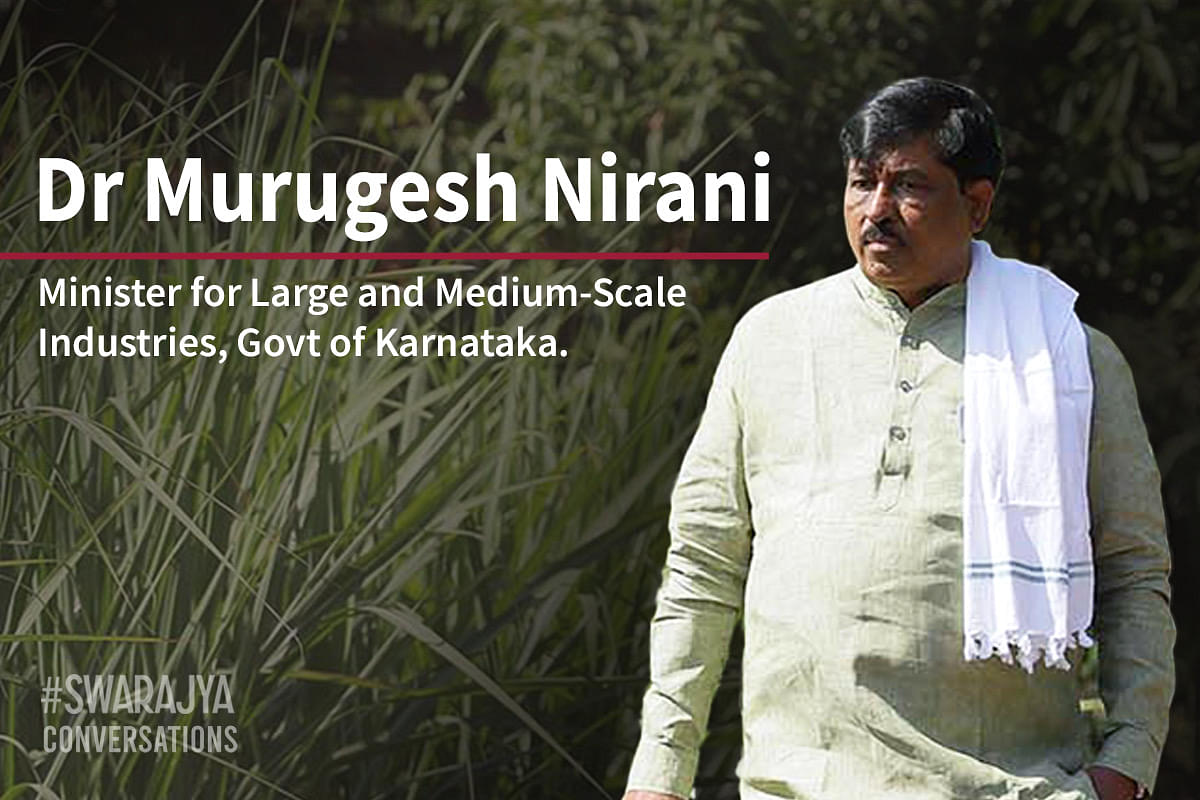 Even as the nation has been grappling with the fallout of the pandemic, Karnataka has emerged as India's most attractive investment destination. The industrial sector, which was severely hit by the pandemic, is witnessing a sharp revival.

The state's capital city Bengaluru has long been the crown jewel of India's Information Technology success story. Powered by entrepreneurial talent, it is now at the forefront of the start-up revolution.

"But this surge of entrepreneurship shouldn't be restricted to the IT capital, nor should our youth look at just being educated and finding jobs. They should be the ones who dream of employing thousands of people in their own towns and villages. That is the intention driving us to go all out to promote entrepreneurship", says Karnataka's Minister for Medium and Large Scale Industries Murugesh Nirani.

Speaking to Swarajya after having just returned from attending another edition of the 'Udyami Aagu Udyoga Needu' programme, an student outreach initiative aimed at fostering entrepreneurship organised by the Department of Industries and Commerce, Govt of Karnataka at the KSOU auditorium at Mysuru, Nirani says he is optimistic at the innate talent that the youth of the state possess.

Nirani says that he was overjoyed that his latest interactive sessions drew close to 5000 young minds from colleges across Mysuru, Chamarajanagara, Mandya, Chikmagaluru, Hassan and Kodagu. He is particularly pleased that the session went beyond the stipulated time. Students enthusiastically engaged with him and probed him on ecosystem and policy incentives for fostering entrepreneurship in the state, he says.

The programme is being conducted in various regions across the state, providing a platform for college students to interact with successful entrepreneurs, industry experts and motivational speakers.

"We know not all 5000 of them will turn entrepreneurs. But even if 0.1 per cent of them do, they can employ the remaining who dont," says Nirani, whose personal journey of entrepreneurship was steered by "inspiration from one of our state's most visionary rulers".

"I want to share lessons on entrepreneurial success stories from Karnataka and with all humbleness, my own growth to inspire 'gen next', he explains.

Nirani describes to us his own journey of starting from an investment of just Rs 10 lakh to being a sugar baron, the largest producer of ethanol in Asia and an industrialist who changed the face of his district (Bagalkot) and in particular his constituency Bilgi.

"Have you been to Mysuru?' he asks us. 'When you look at Mysuru what do you see? What sets it apart from other cities that royal families ruled, say Hyderabad? It is the vision of Maharaja Nalvadi Krishna Raja Wadiyar."

"It is the foresight of a ruler to steer inclusive growth and do whatever it takes to enable that region to grow and be truly self-reliant. " he adds.

What Nalvadi was to Nirani is what he wishes to be to the thousands who attend these entrepreneurship workshops. Six events have been planned in total, of which four have been completed in Bengaluru, Kalaburgi, Mysuru and. Two more are scheduled in Mangaluru and Tumkuru later this month. More than 10,000 students have attended it so far.

"Mysuru was a huge royal family in the country. But if he (Nalvadi) didn't have the vision that a 'leader cant be a looter' - like say the Nizams of Hyderabad were and did no development other than building a few grand places of worship- Mysuru wouldn't be what it is. Maharaja had Sir Mirza Ismail, Sir M Vishweshwaraiah and other brilliant minds in his court - with whom he envisioned the growth of the entire region and its people. That was at a time when there were no such good roads, palaces, gardens or reservoirs." Nirani points out.

Nirani shares his own understanding of vision that was driving force of Mysuru Wadiyars.

"They started with agriculture - food self-sufficiency was what made people' atmanirbhar' back then. For the fields to be irrigated, they envisioned the KRS dam, the making of which is a lesson in itself. Then they started encouraging farmers to take to cash crops, and thats when people took to growing sugarcane. To process the produce, they started sugar factories - we didn't have the technology but they got experts from the UK and started the country's first plant." Nirani elaborated.

"When cane turned to cash, they started their own bank - Mysuru Bank which then led to the start of educational institutions where the children of the region would get educated. And to employ them then, they created a group of industries which would produce almost everything that the region would need from shirt buttons to saree to soap to incense sticks to steel, cements …everything. They could have grown as just royalty, but their concept was all-round inclusive growth. Their vision was of the region being atmanirbhar." he adds.

"When I went to Mysuru long back, i was truly inspired by their vision. Why can't I replicate for my region what the Wadiyars did for Mysuru. That's when I realised I can be Nalwadi Krishna Raja Wadiyar for my district and if they did it for 150 acres, why can we not replicate it on 10 acres at least. Why shouldn't we replicate that model of 'atmanirbhar' industriousness at a small scale even if it means flour mills and small-scale food industries - at least in my village - if we need paint - we can set up a limestone and paint factory. Like how they decided not to be dependent on any other kingdom or state, we decided not to be dependent on any other taluk. This is how we started." Nirani tell us on how he translated the vision in the context of his own constituency.

An inspired Nirani then began replicating in his own native place. "Even creating two bridges can potentially to his place do what the dam did for Mysuru." he recalls telling himself

Starting from there to looking at irrigation, starting sugar factories, six in his own district, to starting Vijaya Souhardha bank named after Mysuru's Vijaya Bank 175 branches of which now exist, to educational institutions to then generating employment through 21 various industries under the MRN group of institutions that now have a total of 72,000 employees, Nirani says he is truly proud that he has been able to transform the region in a matter of few decades.

"You name it and we have done it, be it hotels, hospitals or tourist places - we have created a bird sanctuary and a large garden - lakhs of migratory birds come to our region," Nirani tells us.

And this is the dream he wants the youth of the state to share.

"This is what I share with the young college children that they should grow to outdo what I and the likes of me have. Be it Vijay Sankeshwar, Aravind Melligeri, Vidya Murkumbi, Narayana Murthy, our state has umpteen examples and these youth should be fired up to beat us all and stand where we do today to fuel the next generation," he says, adding that that's the crux of these entrepreneurship boosting programmes that are being held across the state.

Besides enabling interactions of budding entrepreneurs with successful entrepreneurs, the daylong workshops also have bankers and senior government officials providing necessary guidance and assistance to them.

The second day of these two-day sessions has a unique grievance redressal programme called the Kaigarika Adalat that Nirani spearheaded. "It is a platform created to resolve industry-related issues and to give you an example, of the 485 applications submitted at the Kaigarika Adalat in Bengaluru, 438 applications were settled on the spot," says Nirani, adding that the state is doing whatever is needed to enable ease of doing business.

"Our ministry has successfully established 11 commercial courts in Bengaluru for the first time in South India to settle economic disputes between entrepreneurs and enterprises," he adds.

The state is gearing up to host the Global Investor Meet in November. "We aim to create more than 10 lakh jobs during GIM in Nov 2022. We will work closely with AIMO and its numerous councils collectively to ensure that we get maximum benefit for Karnataka," assures Nirani.

'Karnataka is working to become a $1 trillion economy in next six years,' reiterates Nirani as he signs off.