Nirmala Sitharaman Interview, Part One: "We Are On A Spending Offensive” 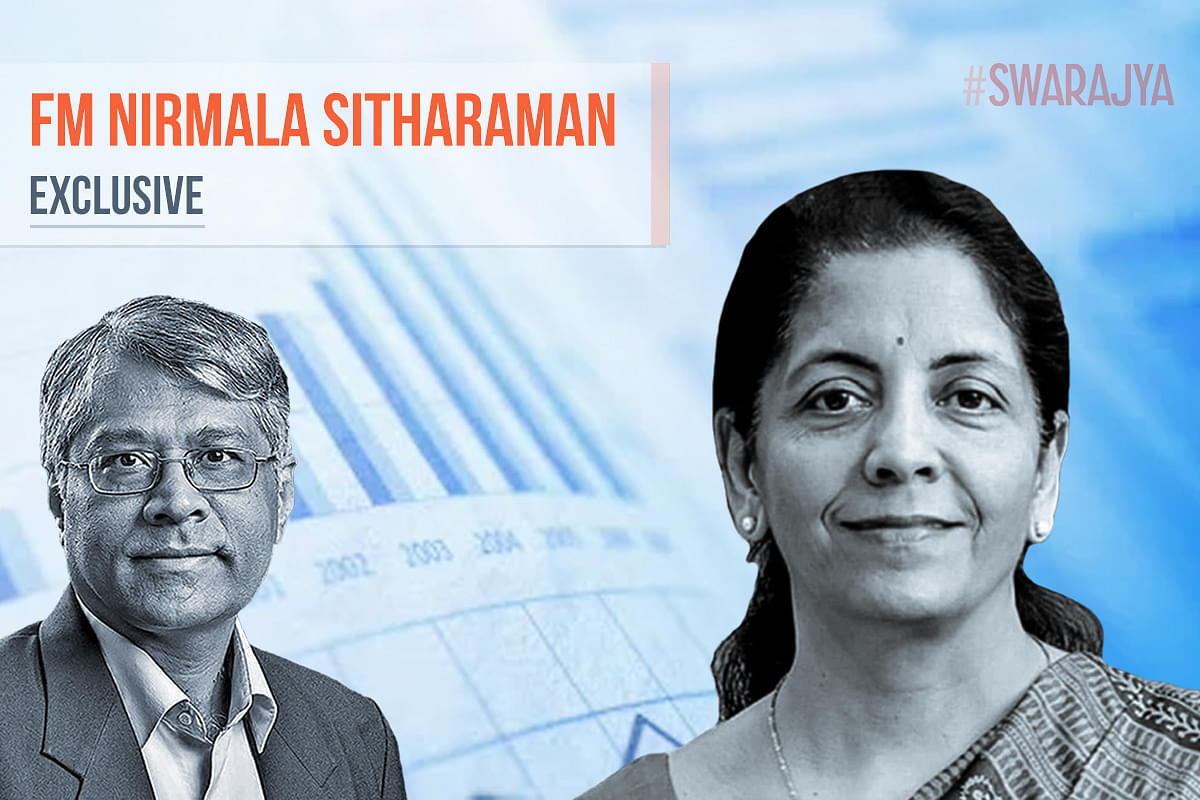 "I am hopeful that in the third quarter (October-December 2021) we will see a good run", says FM Nirmala Sitharaman.

Finance Minister Nirmala Sitharaman, whose stewardship of this most important ministry has been impacted negatively by Covid not once but twice in the last 18 months, is not the type to make excuses just because the going is tough. After launching a plethora of reforms – from tax cuts in 2019 to bank mergers to the telecom rescue package, and the withdrawal of the retrospective tax, to name just a few - she is limbering for the next big challenge.

It’s about helping the economy rediscover its animal spirits, for which boosting government capital expenditure is key. “We are on a spending offensive,” she says.

Her plate of challenges is already overflowing with massive privatisation (Air India, LIC) and asset monetisation targets to oversee and deliver, some of which have to happen by the time of the next budget that’s due on 1 February, barely four months away.

It was against this backdrop that Sitharaman gave an extensive interview to R Jagannathan and Tushar Gupta of Swarajya.

Excerpts from the over hour-long-interview:

Swarajya: What are you challenges in the next budget?

Sitharaman: It is too early to say, but let’s leave aside the second part of the question (about the budget challenges). I can tell you what are the challenges now. It is to make sure that the BE (budget estimate) figures on capex (capital expenditure) are met because we gave a 34 percent hike (over last year). We have a challenge on that because the budget came in February, and by April we had the Covid second wave. Many government departments had a big role to play (in spending that capex). Although I was monitoring spends every month, and will be monitoring every month even now – the PM asked us in cabinet to make sure that the targets are achieved – but ground realities in April and May were different. As a result, what should have happened in the first quarter did not happen.

But now, we are pushing as hard as we can. I am hopeful that in the third quarter (October-December 2021) we will see a good run. We hope we will be able to make up for what we lost in the first two quarters. So, that’s my first challenge: to see that the capex shown in the BE can be undertaken.

The second challenge is less of a challenge because vaccination is going on fast, and with that confidence, businesses are more relaxed and recruitments are catching up. There is a change in the pay pact (structure) from what it was before. There are more higher-end jobs and not so much for lower-end ones compared to 2019. The narrative on employment has changed, and we have to see how it will play out. But recruitments have started.

In rural areas, demand for MGNREGA is not as heavy as it was before. Does that mean people are sitting there but not doing things? No. People are moving back (to cities, where the jobs are), but some of the industries I have been talking to say they are not all going back to their old employers. They are now bargaining to seek better pay packets with new skills and moving to different employers who need those skills. Their old employers are still not worried because they think they are getting new and younger people who are partly skilled and are willing to invest in them as they are revamping their business models. A lot of them (businesses) are now without hesitation going for robotics and different kinds of artificial intelligence (AI), which is helping them.

A whole lot of churn (in the jobs and skills market) has now gone to the ground level. The churn is happening so rapidly that it is a challenge for us to document it and understand the profiles of workers and the skillsets, and where the flow is going and where it is not.

All these are (essential) inputs for what we can do in the budget. Unless these churns are captured with the skill profiles, and we can understand how businesses are resetting their models, the next budget cannot be meaningful. So, I will definitely spend time on (understanding) these trends. I am meeting not just big businesses, but also small ones.

Swarajya: Are small and medium businesses able to make this transition?

In one of my recent visits to Tamil Nadu, I had an interaction with Ficci and CII (south zone), and some micro and nano businesses also came to meet me. They said quite a few things, and one of the things they said was how they were tied to one big mother industry. They are trying to see how they can readjust if that big customer is under threat.

I saw a recent newspaper report which said one of the big auto companies was closing down operations, and its suppliers were asking for ways in which they came be compensated or helped (for loss of business), though I am not sure compensated is the right word here. Maybe, many other groups of (ancillaries) that are dependent on one large customer are now going to rapidly readjust.

All this is happening fast, but simultaneously many more industries and their supplier ecosystems are moving in from elsewhere and coming to India. Their demand is also for local suppliers. How much and how fast these industries, not only in the south but all over India, can link up with the new companies which are coming into India (is worth observing).

Swarajya: Is the China plus one global resetting of supply chains, and the government of India’s own production-linked incentive (PLI) scheme to attract manufacturing to India helping?

Actually, it is happening. In fact, there are many sectors where PLI is not offered but even they are being impacted by investments from abroad.

Swarajya: Your direct tax revenues are buoyant. Your advance tax collections in the first and second quarters are keeping pace with budget numbers, something that is not usually noticed in the first half of the fiscal year. But there seems to be a reluctance to spend.

If I am hesitant to spend, why would I monitor spending on capex? We are almost on an offensive, saying go, go spend. Capital expenditure is literally the priority, but there have been two main – justifiable - constraints. One is the constraint of Covid itself, which made a lot of people hesitant. And now, of course, that hesitancy is coming down due to vaccination and the receding of the second wave.

But the second constraint is the absorption capacity in some areas – on roads it is not a problem and capex is moving. But you will recall that we have put an emphasis on building health infrastructure in the budget. Health infrastructure involves both the Centre and states as the hospitals are to be located in states. We have also said that this (new healthcare infrastructure) can go down to the block level, which is even further down. If money has to be pushed to the level of blocks, a lot of simultaneous activity has to happen at the local panchayat level, the municipal level, and the state level. Every state is keen and we are also trying to identify some areas through our aspirational districts programme.

From states like Bihar, we have some active engagement happening. If I can bring in a comparison, if in Tamil Nadu there are two districts that are aspirational, and Andhra also two districts, Bihar has 12-13 aspirational districts. We have spoken to the MPs from those districts - irrespective of party affiliations – and asked them to identify Tier-2 or Tier-3 towns where hospital capacities have to be ramped up. We are helping in two ways: if it is in the private sector, we are giving viability gap funding; if it is the public sector, we are ready to invest and ramp up capacities in ICUs and beds.

This takes time. But because I have interest in the kind of work I do I have been engaging with states, asking them to tell me which are those districts that want private or public hospitals. I will push banks for viability gap funding, and I will give the resources for government hospitals.

Swarajya: Is coordination with the health ministry happening on this?

Absolutely. I requested the health ministry to not mind this because I want things happening faster. I did this in Tripura, and in UP the CM is already doing it. He himself is coming up with a lot of requests, I am dealing with Bihar too in that way. I will be visiting Assam soon. So, yes, we are pushing on capex, not just with big ministries like heavy industry, defence, railways and home, but also engaging with states to make sure that that aspect of the budget estimate also gets pushed. Absorption is an issue not because they can’t do it, but because it has to percolate down (to the block level).

Swarajya: Will the ramp-up in health spending sustain after this year, after Covid?

I would think so, even leaving the vaccination (spending) aside, because we have provided for health infrastructure. Many of them may not be in a position to complete all the programmes they have started this year, and so this emphasis on health will continue.

Swarajya: Your last two budgets were overtaken by two Covid waves. Can you insulate the next budget from a possible third wave?

I think the emphasis on infrastructure, whether it is oxygen, ICUs, or preparing for paediatric needs if they arise, will help. As an MP (from Karnataka), I had requested that all my residual MPLADS (Member of Parliament Local Area Development Scheme) funds be spent on one of the big government hospitals in Bengaluru in Jayanagar. I have also requested two or three companies to give their CSR (corporate social responsibility) funds and banks to help ramp up the children’s ward there. Many MPs have taken up that kind of initiative to strengthen healthcare infrastructure. But it's not just MPs. There is money to ramp up infrastructure, and if - god forbid – there is a third wave, we will be in a better position than before.

Also, during the second wave, many experts felt that the best way to keep the economy on the rails was to localise any (negative) effects of Covid. This method has worked during the second wave – an option not open to us in the first wave (when we had practically no infrastructure to deal with the pandemic).