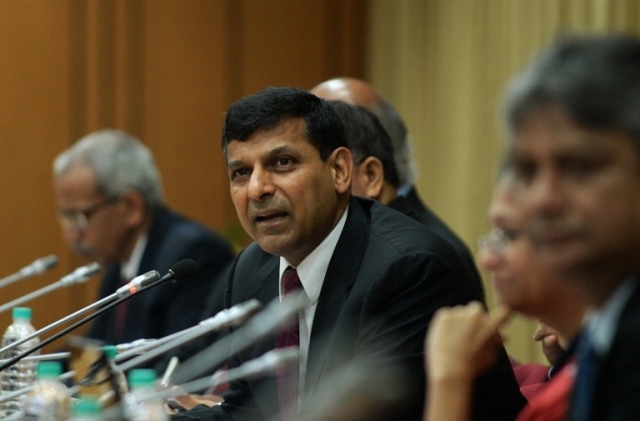 If Arun Jaitley was expecting some pick-me-up from Raghuram Rajan on interest rates, he would have been disappointed by the Reserve Bank Governor’s monetary policy announced today (2 February).

However, the most important signal Rajan sent was not that he was keeping repo rates and the cash reserve ratio unchanged for now, but that he may continue doing so. In fact, Rajan effectively lobbed the ball back in Jaitley’s court, suggesting that rate cuts, if they happen, will depend on how closely Jaitley sticks to his stance on fiscal rectitude. The fiscal deficit Rajan has his eye on not only the number Jaitley will produce on 29 February, but what the states will do, now that they will be issuing bonds to clear the dues of their power discoms.

Rajan said: “The Indian economy is currently being viewed as a beacon of stability because of the steady disinflation, a modest current account deficit and commitment to fiscal rectitude. This needs to be maintained so that the foundations of stable and sustainable growth are strengthened.” (Italics mine).

If fiscal rectitude is to be maintained, it means Rajan will look at any slippage or postponement of next year’s fiscal deficit target negatively. It implies that if the fiscal corset is loosened, he may have to keep rates higher.

Jaitley should also read Rajan’s lips on what he thinks about inflation – which again has implications for rates. Rajan’s words indicate that the inflation challenge is not over, and this could tie his hands. This is what he said: “Going forward, under the assumption of a normal monsoon and the current level of international crude oil prices and exchange rates, inflation is expected to be inertial and be around 5 per cent by the end of fiscal 2016-17. However, the implementation of the VII Central Pay Commission award, which has not been factored into these projections, will impart upward momentum to this trajectory for a period of one to two years. The Reserve Bank will adjust the forecast path as and when more clarity emerges on the timing of implementation.”

What Rajan is implying is that the fall in inflation is effectively over, and in future it could strengthen, especially if the Seventh Pay Commission report is implemented. He is also hinting that the RBI may revise its inflation forecast based on how the report is implemented. A revision would obviously be upwards, and this means he will keep interest rates high for longer than earlier anticipated even when the rest of the world is cutting rates.

Rajan also seems to be bearish on growth. He expects the gross value added (GVA) this year to be 7.4 percent, but this could actually end lower. For next year, despite factoring in a normal monsoon, he sees growth rising only to 7.6 percent.

A 0.2 percent rise in 2016-17 GVA means that even as the Modi government enters the mid-point of its five-year mandate, growth will be nowhere near its targeted level of eight-percent-plus.

Rajan is effectively saying, “It’s over to you, Mr Jaitley”. He said: “Structural reforms in the forthcoming Union Budget that boost growth while controlling spending will create more space for monetary policy to support growth while also ensuring that inflation remains on the projected path of 5 percent by the end of 2016.”

To get growth up, Jaitley may have to walk alone. He is unlikely to get any leg up from Rajan, who sees inflation and fixing bank bad loans as his main challenge.

One, since Rajan has not cut rates, banks have leeway to maintain spreads, especially at a time when the RBI is asking them to make higher provisions for bad loans and recognise them earlier. This could mean banks will need more capital, and balance-sheets will look troubled for some more time. The net impact on bank stocks is unpredictable.

Two, maintaining high rates for longer means that Indian debt will remain attractive to foreign investors, especially if the rupee is reasonably stable – as it should be, given rate differentials.

Three, Rajan has effectively made it more difficult for Jaitley to ease the fiscal deficit target by too much.

Jaitley may not be happy with Rajan, but the world’s investors surely will be rooting for him. He is the best thing that happened to us.