Shifting To Digital Payments: Did DeMo Have Any Effect Beyond The Shock Value? 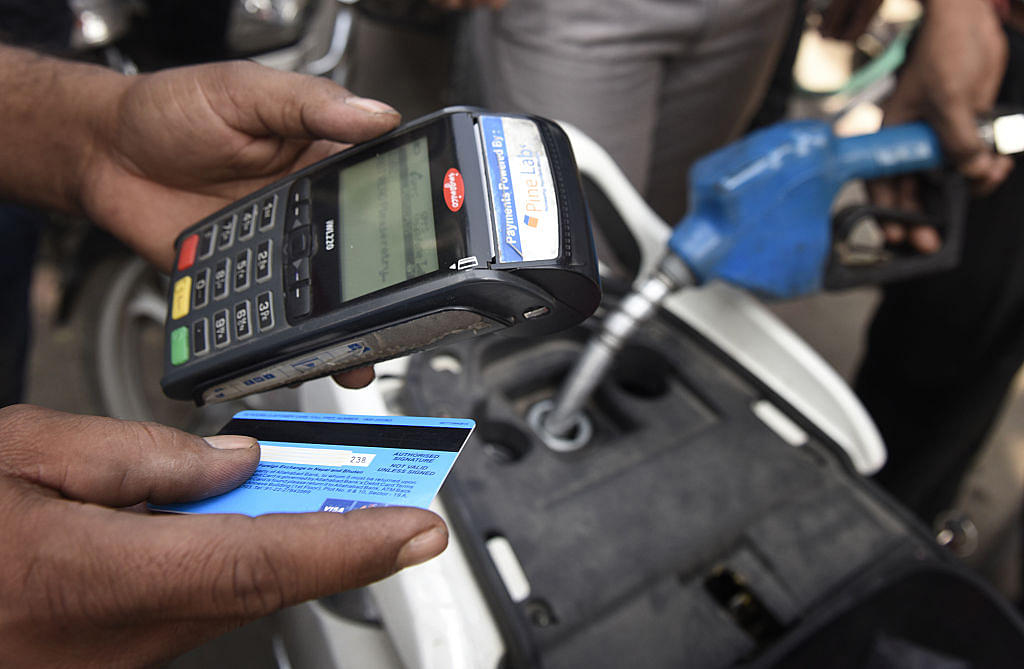 The people using debit card to pay for the petrol at Petrol Pump in Mayur Vihar on November 9, 2016 in New Delhi, India. In a surprise announcement late Tuesday, Prime Minister Narendra Modi banned 500 rupee ($7.50) and 1,000 rupee notes effective midnight, sweeping away 86 percent of total currency in circulation. In panic people flocked to their nearest ATMs, Petrol Pumps and Railway Stations to get change cash. (Sushil Kumar/Hindustan Times via Getty Images)

The recent annual report of the Reserve Bank of India has finally revealed the percentage of demonetised notes that have been returned after 8 November 2016. It is about 99 per cent. This number does not automatically imply that the ‘war on black money has been lost’, as explained in this and other commentaries. But as we will see ahead, there is ample scope to conclude that the shock of demonetisation may not have ensured a non-reversible shift from cash to digital mode of payments among sections of the population.

What 99 per cent tells and what it doesn’t

Observers have guessed that the percentage of the returned demonetised bank notes is uncomfortably higher than what the designers of demonetisation expected. The guess was based on the amount of time the RBI took to come up with the relevant numbers. There were two releases by the RBI in November and December 2016, which showed the brisk manner in which the demonetised notes came back. However, there was none since January, when the window for returning the demonetised notes closed.

If a lack of accounting ability based on digital records was not the reason for the delay, then it raises suspicion on the entries made by bank branches. It also makes one wonder if RBI’s silence was maintained to benefit the government. While the former reflects the lack of understanding of individual responses to incentives, a fundamental error for a pro-market party, the latter is a tyranny of the majority’s will on all other institutions of democracy. Here we reach the boundary of implications. Commenting any further will be like designing a conspiracy theory, let’s not do it.

But it is still too soon to see the ‘99 per cent’ as a failure. The government can claim a way out of the blame by citing the possibility of an increased present and future tax revenue, downward pressure on interest rates due to a flood of liquidity and a widening of the tax base with a lot of offenders on the radar of the tax authorities.

Also, this ‘99 per cent’ is not the only number thrown about demonetisation. A large number of accounts have been red-flagged. We are being told that a massive tax scrutiny is underway and that income tax declarants have increased. The Prime Minister has appealed to chartered accountants not to aid unaccountable transactions. So, there is scope to believe that what might have escaped from the central bank's dividend will be caught in the tax net. We still need some more time to tell whether demonetisation has failed in punishing unaccountable cash hoarders and in bringing the much-hyped bounty of few trillion rupees.

However, Fizz Running Out Of ‘Shift To Cashless’

But there are clear indicators that the effect of demonetisation on digital transactions is rapidly fading. And it is not even surprising, given the shortage of currency notes is being rapidly filled. High denomination notes are in circulation and one of new values are going to appear. So, there is an absence of durable disincentives for cash usage. The short span of a few cash-starved months has not been enough to bring a behavioural change from cash to digital transaction. As disincentives to use cash rapidly disappear and dry ATMs become a rarity rather than a norm, consumers will start using cash as they were doing before. There are clear indicators of the same. (Figure 1 to 4)

Figures 1 to 4 allow us to make following observations:

2. Mobile wallet usage picked up a few months before November 2016 and was further accelerated by demonetisation. But there has been a steep decline in the last few months. (Figure 2)

The failure of the proposed ‘shift to digital’ generates suspicion that the ‘shift to digital’ was just an empty substitute for the fading ‘war on black money’. For, if the shift was indeed the objective, then there should have been durable disincentives to the use of cash. Since the use of cash abates the shadow economy, the failure to have durable disincentives also raises questions about the commitment towards the objective of curbing the unaccounted ecosystem.

‘Shift to cashless’ will nonetheless occur as the fraction of ‘digitally illiterate’ population will decline with time. But the impetus given by demonetisation will not be a contributor to the shift. It was an opportunity lost. And the claim is not any intriguing conspiracy, but a story based on numbers. Let’s hope that tax numbers will bring the compensatory cheers.