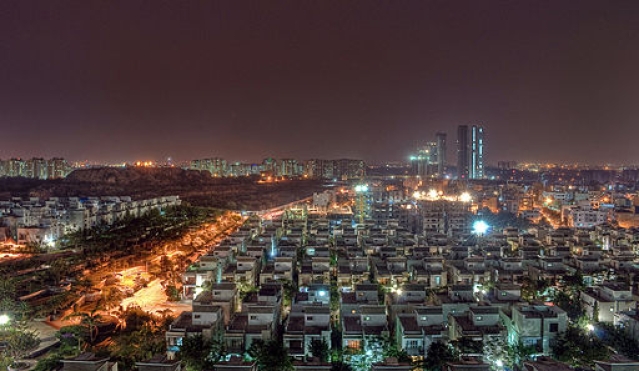 Previous record of urban development missions forces us to be cautious when it comes to Modi’s Smart City vision as well. Also, there are serious questions regarding division of responsibility between centre and states which are still unanswered.

The road to Chandigarh gets crowded about ten kilometres before you enter the City Beautiful. Pavements occupied by hawkers, nursing home and path labs, large apartments construction and the battered black and yellow tempos fighting for space on the road.

On entering Chandigarh, the indomitable spirit of the Indian city makes way for order – neat, tree-lined roads with dedicated service lanes, roundabout with manicured grass, criss-crossing and dividing the city into sectors. The sectors themselves are an epitome of formality and planning; separating businesses with residences, the public with the private, the posh with the poor.

As you leave Chandigarh, the order again makes way for chaos, Panchkula is in view- business are up and so are people. Sixty years since it was created, Chandigarh is still struggling to become a million plus city, while its suburbs – Zirakpur, Mohali and Panchkula flourish.

Chandigarh was one of the many cities Nehru and his planners built across the country. These Greenfield new towns were to be examples of a new India – epitomising the promised move from a stagnant and backward country to one that embraces planning, modernity and superiority of technology.

From railway towns of British Indialike Kharagpur to new towns set near existing urban areas like the Hindustan Aeronautics and the Indian Telephone Industry’s townships near Bangalore to fifty new standing towns like Nangal in Punjab and Neyveli in Tamil Nadu – India, since independence, built more than hundred new towns; easily the precursor to our smart cities.

These towns, majority of which were created from ‘scratch’ were thought to trickle down development but today, about half of these hundred new towns got merged with the nearest big town and others didn’t reach that density which could sustain them. India’s hundred new towns were not a success story.

The return of the SMART cities

During the first hundred days of the new government, full page advertisements adorned most national dailies where real estate companies competed in their claim for India’s first SMART city. Lavasa near Pune, Wave city near Noida were competing with Gujarat’s GIFT and the Dholera smart city on the Delhi-Mumbai industrial corridor.

The anxieties were justified, for in its 2014 election manifesto, the Bharatiya Janata Party (BJP) announced “We will initiate building 100 new cities; enabled with the latest in technology and infrastructure -adhering to concepts like sustainability, walk to work etc., and focused on specialized domains.” Once in power, aspirations met reality – a year long delay in announcing an urban policy preceded with an obscure note on Smart Cities – a reflection of  the gargantuan task this government realised it is against.

Two new programmes, Smart Cities Mission and the Atal Mission for Rejuvenation and Urban Transformation (AMRUT) covering 500 cities and having an outlay of Rs. 48,000 crore and Rs.50,000 crore respectively were announced as the governments response to India’s urbanisation challenge.

It is clear that the government’s grand vision of building hundred new cities is no more a proposition. Greenfield cities across the globe offer countless examples of how new cities take long periods to acquire a density that makes the city sustainable. Noida, Bhubaneshwar, Gandhi Nagar and Naya Raipur are the examples of our own experience with Greenfield cities.

The discussion note on Smart Cities (December 2014), put out by the Ministry of Urban Development (MoUD) provides a list of the eligible smart cities. These hundred cities, except for an addition of 25 cities between the sizes .2 to 1 million, mirrors the sixty-five cities under the Jawaharlal Nehru Urban Renewal Mission (JnNURM) – a government policy the smart cities wishes to subsume.

The Smart cities mission announced Rs 200 crore to every smart city in first year and then Rs 100 crore thereafter which a city challenge competition reportedly with the help of Bloomberg Philanthropies will decide.

A dominant city development narrative of the 90’s city competition funding was launched as back as 2003 during Vajpayee’s government largely lead by experts from USAID and UKDFID who wanted this fund to be an incentive-based grant facility to support cities to fund transitional costs of moving towards sustainable, institutional systems of municipal management and service delivery.

Comparisons and research on competition funding point towards the limited strategic capacity amongst our municipalities, plus the complex nature of linking payments to performances in the Indian context. Establishing Special Purpose Vehicles (SPVs) to bypass urban local bodies, would mean moving away from elected, participatory institutional systems –something that the city competition funding, ironically aims to achieve.

Secondly, the smart cities mission again, prioritizes SPVs as implementing agencies- neglecting the one lakh elected representatives from the urban local bodies which continue to remain functionally, structurally and financially neglected in the urbanization debate.

Thirdly, the same discussion note on smart cities mentions “…it is expected that most of the infrastructure will be taken up either as complete private investment or through PPPs. The contributions from the Govt. of India and States/ULBs will be largely by way of Viability Gap Support (VGF)…”

While every smart city will receive 480 crores in the next five years under the smart cities mission, generating private sector interest to do projects in all hundred cities is nothing short of utopia.Under the JnNURM, data till 2012 showed that water supply, sewerage and drainage and roads were the three areas in which governments spent most of the money. JnNURM offers the best evidence on how in spite of opening up investment for private players, the PPP model failed to take off in a big way, especially with regard to implementation of infrastructure projects.

Fourthly, within the urban, disparities exist. Scholars have for long empirically argued a “Metropolitan bias” in the central government schemes where a larger share of central assistance was committed to the big cities compared to the small towns having more urban population. The big cities have access to many funding opportunities, bilateral, private, union and state governments- it is the Tier III towns and onwards which need more funding. The contours of smart cities mission and the AMRUT don’t look any different.

The decade from 2001 to 2011 is the first ever census decade in which the absolute growth in urban population is more than its rural counterpart. What the states will chose to build as projects, only time will tell but the scale of urbanization requires a vision and not a mere shift from one project name to another. Questions of federalism, devolution and principle of subsidiarity which would have pointed towards a vision for the future must be answered.