The Budget Speech: What Does It Really Say? 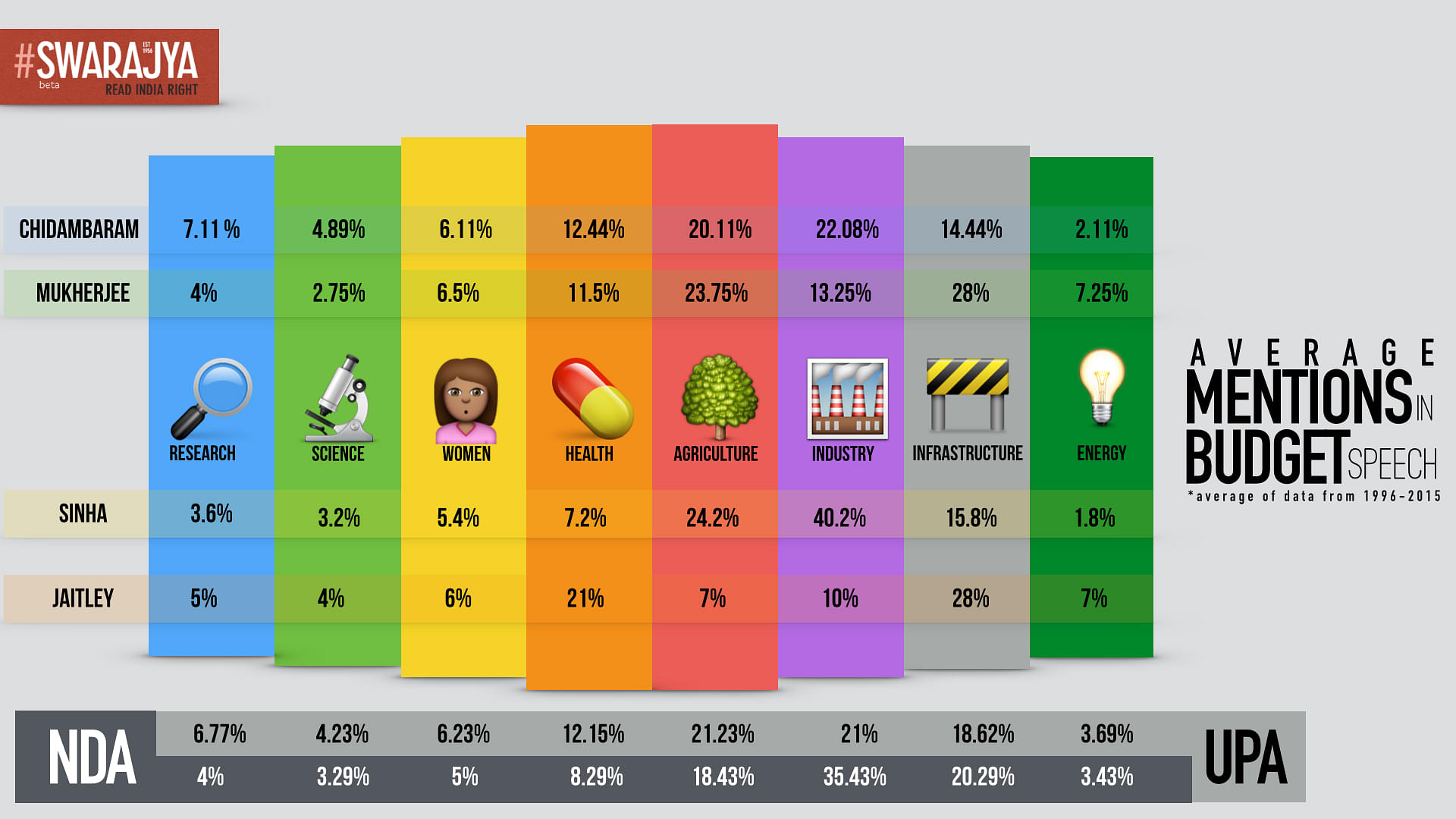 An analysis of the Union Budget speeches of the past 20 years shows the emphasis of various policies used by the different governments. How do these help us plot the historical trends in our economic policies?

This article conducts a word-to-word analysis of Finance Ministers and their Budget speeches over the past twenty years. The original intent of taking up such an analysis was to understand the emphasis given to science and research, as represented by the number of times it was mentioned in the speech. However, once we explored the data in greater depth (of all the Budget speech transcripts, available online at indiabudget.nic.in), we found that budget speeches often strongly indicated the policy emphasis (and preferences) of various governments and their finance ministers. Word frequency analysis is a commonly utilised statistical tool to interpret qualitative data, particularly in the form of text. In this case, we employed it to plot historical trends in certain areas of economic policy.

Using the Budget speech as our data source comes with some caveats: first, all government policies and budgetary allocations are not announced in the FM’s Budget speech; second, even though Budget speeches firmly cement the government’s economic intentions, mentions of any particular word are often loaded with context. For example, when ‘research’ is mentioned, it could even mean a cut in the research budget.

However, the overall results we obtained could be suitably explained using contemporaneous economic events as well as emerging socio-political environments. For example, we find that the word ‘woma(e)n’ is mentioned significantly more in the Budget speech for 2013-14 than any other year, perhaps a reflection of the brutal gang-rape of a young paramedical student, and the consequent activism around women’s safety in India since December 2012.

The data offers further insights when seen through the perspective of political economy. We categorized the Budget speeches under the names of the Finance Minister and the government that was in power at the time. This allowed us to explore whether specific governments (as well as Finance Ministers) had policy preferences, or ‘pet’ areas that were represented in the Budget speech.

Surprisingly, the words ‘research’ and ‘science’ are mentioned an average of approximately 6 and 4 times respectively, in every Budget. Compared to the average 26 times that ‘industry’ is mentioned (or the 16 times ‘foreign’ or ‘international’ is mentioned), this shows a decisive lack of initiative on the part of the central government to focus on research and development. However, when the UPA was in power (averages in parentheses), ‘research’ (7) and ‘science’ (4) were mentioned more often than under the NDA – potentially showing that the UPA’s economic policies were more attuned to fostering a relatively active research environment. This is further substantiated by the constant (but miniscule) spend on Research and Development as a fraction of the Gross Domestic Product (GDP).

We note a fluctuating trend during the NDA’s reign, but a stable commitment of nearly 0.8-0.9 percent of GDP towards research during the UPA’s reign (2004-2011).

Of particular interest is also the Budget focus around the time of the global financial crisis that began in 2007-08. Notably, we see a sharp decline in the frequency of the word ‘industry’, but a slight increase in the number of times ‘agriculture’ was mentioned. Of all mentions, the word ‘crisis’ was found 37 times between 2009 and 2014, indicating that policy was strongly influenced by this event.

The record on average mentions of ‘infrastructure’ is matched only by Pranab Mukherjee. This is possibly owing to the large emphasis on two schemes during his tenure as FM: the Jawaharlal Nehru National Urban Renewal Mission (JNNURM) and the Rural Infrastructure Development Fund (RIDF). Thus, our analysis shows that while the NDA is more likely to be ‘pro-industry’, there is no evidence for any lack of focus of the UPA governments on the same issues.

This article sought to highlight policy emphasis areas for different governments using a novel word frequency analysis that has not been carried out before. Indeed, while the original aim of understanding which government spends more time talking about science and research was fulfilled (short answer: UPA), we uncovered several other interesting trends that mirrored the economic situation during the presentation of the Budget. This largely reveals that economic policy, as approximated by the Budget speech of the Finance Minister, has been somewhat reactive, and not proactive, as many past arguments have suggested.

This is particularly in the case of women’s safety (since 2013) and energy (since 2009), that are being mentioned more frequently in Budget speeches—the former in reaction to heightened alarmism around rapes in the country and the latter possibly to address concerns of sustainability of current energy sources (and to some extent the nuclear energy ambitions of India).  Although policies may be reactive, the surprising observation is that they tend to be neither reactive nor proactive in the case of research. For instance, even ISRO’s recent successful mission to Mars was not reason enough to emphasize a “reactive” policy addressing expenditure on research and science in the Budget speech.