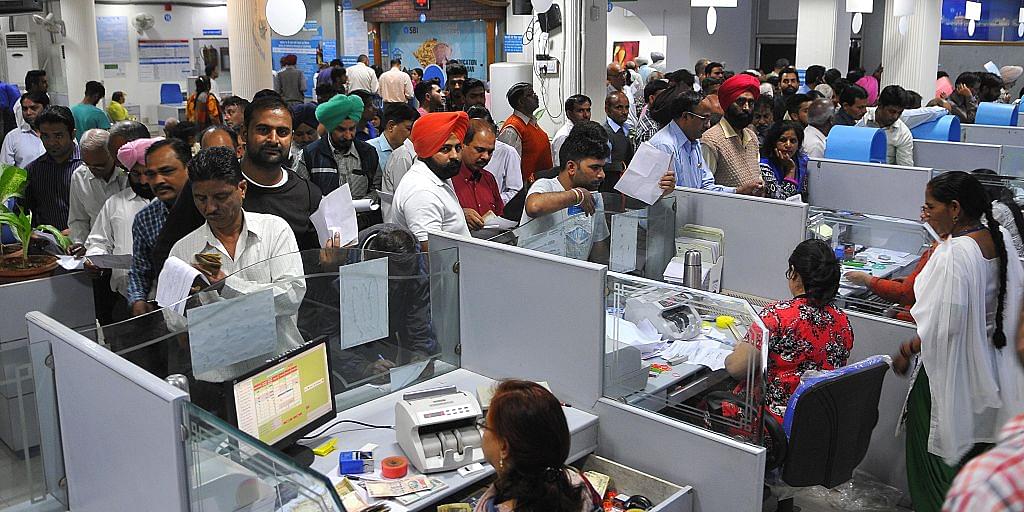 Heavy rush of customers at an SBI branch in Chandigarh. (Keshav Singh/Hindustan Times via GettyImages)

Fourteen days before Narendra Modi was sworn in as the prime minister in 2014, a committee constituted by the Reserve Bank of India (RBI) to review the governance of the bank’s boards submitted a report which began with an ominous statement, unusually stark for a government document. It read: “the financial position of public sector banks is fragile, partly masked by regulatory forbearance… (which) delays, but does not extinguish, the recognition of this fragility”.

The statement neatly summed up the much damaged public sector banking system, doubly marred by cronyism and systemic issues, which was about to be inherited by the Modi dispensation. Since then, the Modi government has made substantive efforts to solve the systemic and governance issues in the public sector banking system. However, the efforts seem to have been overshadowed in the public discourse by recent unearthing of banking frauds, mostly borne out of the same pre-2014 problems, which the government’s actions have sought to correct.

As the policy indecision and a series of scams during the United Progressive Alliance (UPA-II) government stalled the aggressive expansion, which the private sector had embarked on, a large number of projects had hit a wall by 2014. This left the investors in a lurch with a huge amount of debt and the banks overextended, with the public sector banks being the worst hit as they owned more than 90 per cent of the non-performing assets (NPAs). Even in 2014, the possibility of the ‘twin balance sheet’ was considered real, however, the true magnitude of the problem was not known. Only after the Modi government came to power, the RBI ordered an asset quality review for the banks. This led to uncovering of loans, which had not been earlier classified as NPAs. Between March 2014 and September 2017, the gross NPAs of public sector banks (PSBs) have risen from Rs 2.16 lakh crore to Rs 6.89 lakh crore, a big chunk of the spike was due to disclosure of hitherto hidden NPAs. This transparency regarding the NPAs has driven a lot of actions since then.

The large amount of NPAs also meant that a huge amount of capital was locked due to the NPAs leading to a limited capacity by banks to provide new credit for projects. In August 2014, the government appointed a committee to give recommendations on the framework for bankruptcy proceedings to free up the bad debt which submitted a draft code on insolvency and bankruptcy. The Insolvency and Bankruptcy Code (IBC) has since been legislated and now provides the banks with an effective framework to resolve NPA-related issues through quicker liquidation processes. Even as the implementation of the IBC is evolving and the government has formed another committee to improve on the IBC, 524 cases have already been admitted for resolution under the code.

The locked up capital also created problems on the capital adequacy norms front which created the need for additional capital infusion in the banks. While the private banks could raise money from the market, the public sector banks were constrained as they had to maintain the majority shareholding of the government. The Modi government announced the Indradhanush Plan in August 2015 to infuse capital worth Rs 70,000 crore from the exchequer over four years and allowed the banks to raise money from the market. This was a huge improvement over the need-based infusion which was done over the earlier years. Recently, the government has also announced a comprehensive recapitalisation plan including infusion of over Rs 1.35 lakh crore through recapitalisation bonds. This will not only help the PSBs be compliant to the regulations but also boost credit growth.

One of the persistent issues for the PSBs has been the lax corporate governance practices and discretionary decision making. The higher management were beholden to their political masters leading to arbitrary loans and non-complaint financing activities at the behest of politicians. The Modi government broke this link by creating a banks board bureau to select heads of public sector banks. In addition to this, the government has also linked the recapitalisation to certain governance and performance criteria to be met by the banks. While there have been issues in implementing the performance-linked recapitalisation, this will go a long way in professionalising the public sector banking system. The government has also moved on consolidation of various PSBs into more efficient entities. The subsidiary banks of State Bank of India have already been merged and more mergers may follow.

Inspite of these substantive moves, in the aftermath of the recently uncovered scandals, many analysts have still called for privatisation of the PSBs. Irrespective of the original motives behind nationalisation in the 1970s, the PSBs have played an important role in priority sector financing and improving banking coverage. Even now, the PSBs continue to remain the major vehicles of delivery for many financial inclusion and social welfare projects. With alternative remedies available to correct the systemic flaws, at this time privatisation may be too extreme a measure. A continuation on the path of targeted reforms by the Modi government can help build on the improvements which have been made in the last three years and avoid such scandals in the future.