Why Subramanian Swamy Is Wrong: Rajan Needs To Stay 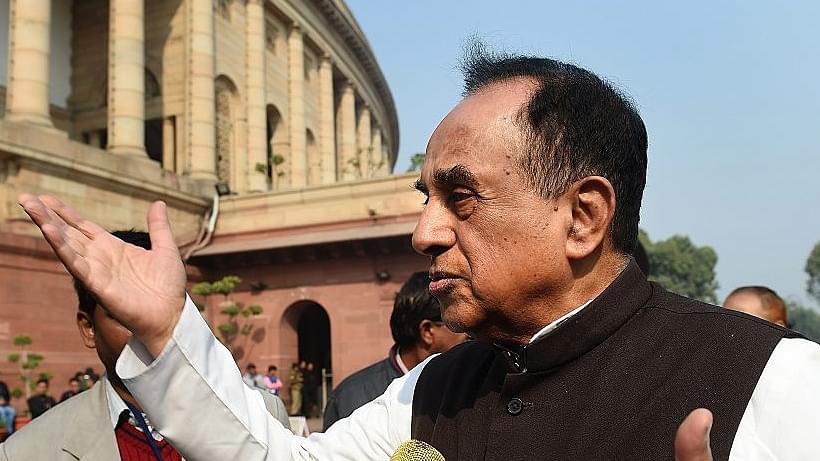 If there is an award for scoring self-goals with intellectuals and thought leaders in the country and outside, the BJP will win that award hands down. This morning NDTV carried this report stating that BJP MP Subramanian Swamy had written to the Prime Minister demanding that RBI governor Raghuram Rajan be sacked from his position.

This is not the first time that Dr Swamy has expressed his distaste for Raghuram Rajan in public. He had penned an article for THE HINDU in September 2015 and I had responded to that in a blog post on that occasion as well.

Writing a letter to the Prime Minister on any matter is his prerogative. But, asking the PM to ‘sack’ (strong word) the RBI Governor and then releasing that letter to the public is in very poor taste.

The Congress and UPA for all their faults did not treat RBI governors like this. The anti-intellectualism in the party (BJP) is an impressive gift to the Opposition.

Intellectuals and English-language newspapers and their editors may not bring BJP votes but they can cause a lot of perception damage for the government in the outside world. They will orchestrate a campaign that, among other things, this government suffers from intellectual intolerance.

Ironically, this government has been wooing the outside world far more aggressively than the previous government ever did. Isn’t that mentally very un-Indian?

I have heard from Dr. Subbarao about the exemplary respect that the Finance Minister P. Chidambaram showed him. He respected the position and accorded the respect and courtesy due to RBI Governor’s role, even though he came from Finance Ministry to RBI. (Please note that this is not to be confused as a defence of Mr. Chidambaram’s sophistry as is evident here)

If being mentally Indian counted for India, India should be a developed country by now, in every respect.

Renewing a green card is not a crime. In 2019, if India’s fortunes turned for the worse, many would like to have the option. Not just Raghuram Rajan.

On interest rates, economists can debate it ad nauseam and ad infinitum, without reaching any conclusion. The first thing economists learn about any theory is that it holds good if things stayed constant. That is why they are not the same as physical theories but just points of departure.

The Indian economy struggled even when the country had mentally Indian governors. Of course, that was in UPA times which did most things under its power to hurt the Indian economy.

The last time the Indian economy boomed was between 2003-08. That was when global economy boomed. Interest rates came down in the West and corporate balance sheets in India were in fine fettle.

That is the point. Regardless of interest rates, other factors are not constant or equal. Exports are declining. Two back-to-back failed monsoons. Fiscal consolidation for two years because of credit rating downgrade risks and fears. Banks with broken balance sheets and corporations groaning under debt. Do low interest rates matter, in these circumstances? I am willing to stick my long neck out and say NO. For economists and others with interest (pun intended) on the matter, this paper I wrote in September 2015 should be an interesting read. The subject matter is precisely this: ‘Do interest rates matter?’

The importance of keeping real rates positive in a country with dependence on external savings and where savings rates had not only stagnated but also declined has not been understood by an economist like Dr. Swamy. That is a pity.

India’s small businesses are not to be feted and protected but offered a mix of carrots and sticks to grow out of their humble origins. If they cannot, the resources tied up in them and with them should be freed up for others.

If the Left celebrated and entrenched poverty, the Indian ‘Right’ (there is nothing ‘Right’ about it) wants to entrench smallness for its own sake: “Let us bring back reservations for Small-Scale Industries and all will be well with India because all was well with India when it had mentally Indian RBI Governors and reservations for the small-scale sector.”

‘Swarajya’ had an article by R. Jagannathan (‘Jaggi’) on why this government should keep Raghuram Rajan for the right reasons. Jaggi got it right. The Governor is a source of unbiased advice for the Prime Minister and the Finance Minister. He can and should be encouraged to play the ‘devil’s advocate’ to keep them grounded and not be taken in by their own exuberant claims of ‘Achche Din’.

In fact, in my MINT article published on April 21, I had suggested that the government explicitly encourage Dr. Arvind Panagariya, Dr. Raghuram Rajan and Dr. Arvind Subramanian to play the roles of devil’s advocates and give it honest advice rather than play cheerleaders for it.

I would like to cite again some observations made by Chris Wood of CLSA on Raghuram Rajan. I had blogged on them here:

GREED & fear hears that Rajan has Modi’s support since the Prime Minister understands that he is trusted by the markets.

There is a legitimate argument that the RBI has remained too tight, most particularly if real interest rates are measured against WPI rather than the new reference rate of CPI. Thus, the real repo rate deflated by CPI inflation is now 1.6% but is 7.4% if deflated by WPI inflation.

In GREED & fear’s view, Rajan’s policy is refreshing in the context of the monetary quackery going on in the G7 world, quackery which the Indian central bank governor has done the best job of criticising among all the world’s central bankers. This is why he will be a natural candidate to lead the IMF, or some other such institution, once those unconventional monetary policies have been fully discredited. But that is a story which has not fully yet played out, which is also why he should remain RBI Governor in the interim. [Link]

If the only way that intellectuals could find room in the BJP tent is by becoming its cheerleaders – read Dr. Panagariya’s article in ‘Indian Express’ today and it should make you cringe because he is overdoing it – that is a bad advertisement for the party and it also means that the party cannot be the vehicle to drive India out of its economic stagnation. Period. There are no IFs and BUTs about it.

This piece was first published in www.thegoldstandardsite.wordpress.com