World’s Heading For A Crisis Worse Than 2008; Can Raghuram Rajan Save Us? 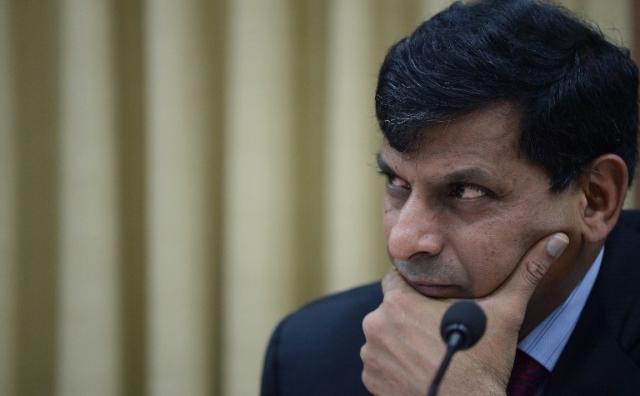 One can usually treat observations and forecasts by central bankers with some contempt, given their poor track records. The US Federal Reserve Chairperson has so far predicted zero of the last 10 recessions. India’s own Reserve Bank Governors (barring Raghuram Rajan) have repeatedly displayed economic ignorance by blaming inflation on the growth we have had. Despite decades of failed monetary experiments, the Japanese central bank, and now the European Central Bank (ECB) have turned to NIRP (negative interest rate policy) to solve problems caused by loose monetary policies. Talk about jumping from the frying pan into the fire!

Amidst these economic pygmies, Rajan stands tall. Not a very difficult task, given the abysmal standards he is measured against. Perhaps, he deserves greater credit for standing up to the clueless finance ministers we have had so far (from Pranab Mukherjee to P Chidambaram to Arun Jaitley), who always seek monetary medicine to support their profligate spending and fiscal recklessness. So far, so good.

But Rajan also has his blind spots. In his speech yesterday (21 March), Rajan spoke about the “increasingly dangerous situation” and the need for an “international agreement along the lines of Bretton Woods”. Before commenting on Rajan’s mistakes, let me outline my thoughts on the evolving situation globally.

“Increasingly dangerous situation” could well be an understatement of sorts. We are heading for a financial catastrophe that will make the 2008 crisis look like the proverbial “Sunday school picnic”. The crisis has been in the making for decades (since Richard Nixon closed the gold-dollar link in 1971), or perhaps even a century (since the formation of the US Fed in 1913), depending on one’s philosophical inclinations.

The above outcome is inevitable (not to be confused with imminent) and we perhaps “crossed the Rubicon” under the previous Fed Chairman, Ben Bernanke, when he instituted QE1 (quantitative easing) after the 2008 crisis. There was no way to normalise monetary policy after that and it has subsequently been a case of one step forward and two steps backward. The end result of this experiment would necessarily be a monetary abyss/currency crisis from which there can be no recovery to normalcy. While it’s impossible to predict the timing of this crisis, it’s quite unlikely that the present Fed chair Janet Yellen will be able to get out of the Fed’s Eccles Building unscathed the way Bernanke was able to.

The solution would necessarily have to be a return to the classical gold standard with no institution having a monopoly over the issuance of currency. Central banks, if they exist at all, would compete against private banks that would issue currencies that are 100 percent backed by monetary metal(s).

Governments that have a monopoly over the issuance of fiat currencies today aren’t going to give up on that enormous privilege in short order. So the path to the above classical gold standard would be a long-winded and tortuous one. Just like the path from the classical gold standard to fiat currencies was a long 58-year process (1913-1971), so too would the return journey. Rajan’s suggestion could well be the first of those intermediate stages of the long overdue journey.

Now to Rajan’s blind spots. What Rajan is missing in his analysis are commonly held misunderstandings on two important issues – deflation and the classical gold standard.

Deflation: This is a issue of biblical proportions and a few lines aren’t going to satisfy the average reader. Just like most people believed that the Priory of Sion was protecting God’s power on earth (the reality, at least according to The Da Vinci Code, is that it was protecting the church’s power on earth), the average person has been led to believe that deflation is bad for economies, while the reality is that deflation is bad only for governments.

Any number of essays/books by Murray Rothbard, an economist of the Austrian School, are available on this issue and the weight of evidence about the growth that the US economy has had under a gold standard (which would be deflationary, almost by definition) is stark. The US transitioned from a primitive agrarian society to an industrial powerhouse under deflationary conditions. The gold standard automatically leads to fiscal discipline and when politicians learned a way to buy votes with money created from thin air (i.e. inflation), figuring out excuses to blame deflation was easy to come by.

In reality, deflation leads to increased savings, higher growth, lower income inequalities and an increase in median incomes. Deflation is bad for the borrower and the biggest debtors today are governments, who would like to diminish the real value of their borrowings/debt through inflation. On the current policy track, ultimately, these debts are likely to be wiped away by hyperinflation.

The Classical Gold Standard: Monetary history, at least the versions that are taught in schools and discussed in mainstream media, have largely been authored by governments and government-backed economists. Even the analysis of crises – the Great Depression, the stagflationary seventies, the 2008 crisis, etc. – have largely been written by the neo-Keynesians.

So it’s not surprising if the average person believes that central banks are a necessity in a complex economy and that a lender of the last resort lends stability to the banking system. That the foundations for these crises – the Great Depression, the 2008 global financial meltdown, etc – were in fact laid by the central banks would be considered an outlandish thought. An even more obvious (that is obvious to students of the Austrian School of Economists) observation - that inflation is a deliberate act of taxation/theft by governments - would be considered an anti-national observation today.

Again, all I can point for further reading is Ludwig von Mises, Murray Rothbard and William Hazlitt.

Our forefathers were far more aware and circumspect about the role and motivations of rulers than the average person today. There were very valid economic reasons for buying gold and, thankfully, despite all government propaganda to the contrary, that practice has continued to date. The illusion of change by virtue of being able to click a button once in five years has deluded the average person into thinking he has real power; politicians have fed that illusion by offering voters something-for-nothing.

The rupee, which was exchanging 1:1 against the US dollar in 1947, is now nearing 70 – a steady and continuous decline over the decades. The dollar itself has been no paragon of virtue and has fallen from $40 to over $1,200 against gold in the same period. That the Indian rupee has lost almost 99 percent of its purchasing power under the watchful eyes of our illustrious central bankers ought to be incriminating evidence of the incompetence of these babus. And yet, we continue to revere and treat them as gods of economics. What more can I say other than that the “sheeple” have had it coming for being illiterate about monetary axioms.

What Rajan really needs to do

What will happen is that sooner or later, the current monetary system will break down and a parallel underground market will start trading real money (probably gold). That is the inevitable result of markets.

What Rajan can encourage is to allow a parallel monetary system to begin within India, with strong and international safeguards against confiscation (requiring much more than a simple act of parliament or a decree of the PM). With the technology available today, it’s far easier to transition to a gold standard and, at least for the foreseeable future, we are not going to have more than a few 1,000 tonnes coming onto the system in the best case scenario. So the volume is going to be miniscule in comparison to the pieces of paper we print in billions and which we consider money.

I have often wondered what would prevent Rajan from doing the above and am listing it down.

(1) Rajan might consider the above hogwash – Possible. But given the track record of Austrian economists in predicting the 2008 crisis, the Nasdaq bubble, the housing bubble, etc – it certainly deserves a second look.

(2) The Indian Government may not allow it – Possible. But if Rajan strongly believes in it, I think he will figure out a way to convince Narendra Modi.

(3) Rajan’s ability to understand free market economics – Probable. All said and done, when you have spent your lifetime subscribing to the monetarist school, it’s pretty difficult to throw it out of your head. As Mark Twain said, “It ain’t what you don’t know that gets you into trouble. It’s what you know for sure that just ain’t so”.

(4) Incentives to Misunderstand – “Not Rated”. As Upton Sinclair said, “It is difficult to get a man to understand something, when his salary depends on his not understanding it”. I would singularly attribute the above philosophy to the near monopoly of neo-Keynesian ideology that dominates world economics. Governments love neo-Keynesians who always recommend a greater role for governments and adequately reward them.

Rajan certainly is no neo-Keynesian. But who knows anything for certain these days? But it’s time for some deeper introspection if India is to side-step the monetary crises that lies ahead.