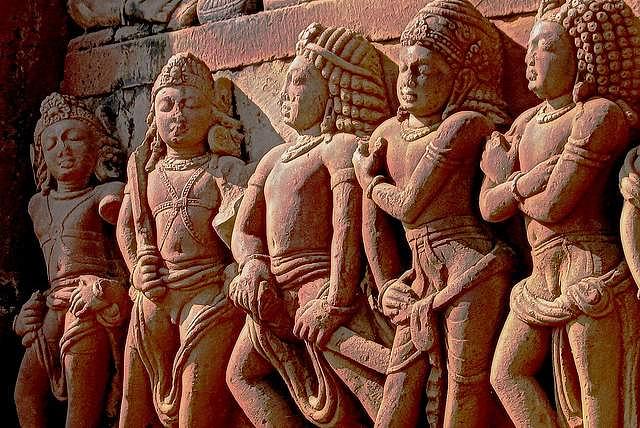 Was Yudhishthira a forgiving man?

One might be forgiven, pardon the pun, for thinking that he was. After all, didn’t he forgive Duryodhana and the Kauravas for the many evils they perpetrated on the Pandavas over the years? Well, yes, he did, for the most part. Yudhishthira also quoted these lines from a song sung by THE sage Kashyapa on the topic of forgiveness:

Why did Yudhishthira quote these eloquent lines? Who did he quote them to?

After being exiled—to spend 12 long years in the forest, and a thirteenth year of “agyaat vaas”—to live in “inhabited places” without being recognized, an anguished Draupadi could not reconcile herself to the docility with which Yudhishthira had accepted such a most unjust fate. She repeatedly asked him how could his “anger not increase” on seeing his brothers and his wife in the pitiable state in the forest?

She could not understand how Yudhishthira could show “forgiveness towards your enemies?” She was clear that “a kshatriya who does not display his energy when the time is right is always despised by all beings.”

As far as Draupadi was concerned, the time to attack the Kauravas and take back their lost kingdom was now.

Draupadi wanted to make it clear that hers was not an unreasoned call for wanton revenge, and that she understood that forgiveness and revenge were two options to consider. She recounted an ancient tale, where Bali had asked Prahlada, his grandfather, whether forgiveness was better or revenge. Prahlada replied that neither revenge nor forgiveness was “always superior”. It was important to “learn the nature of both”.

On the issue of forgiveness, Prahlada believed that the “man who always forgives suffers from many faults”. Not only would his servants “treat him with contempt”, but would also try to steal from him. Worse, such a person would be ignored—a fate “worse than death”. On the other hand, a person who never forgave would be hated by all and be seen like a “snake inside a house”.

What then was the suggested path, in the absence of an immutable commandment? A middle path. Who should be forgiven? For sure a “former benefactor”, provided the crime was “not too great”. Also, because “learning is not easily available everywhere to men”, offences committed out of “stupidity” should also be forgiven. The same went for a “first offence”—there was little rationale behind showing the other cheek. Offences committed “unknowingly” were also deserving of pardon, but “only after proper examination”.

On the other hand, someone who committed an offence “with full knowledge” deserved to be punished, “because this is crookedness”. Therefore, although gentleness was a stronger virtue than harshness, there was a time and place for gentleness. Draupadi was of the firm opinion that this certainly was “not the time to exhibit forgiveness towards the Kurus”.

Yudhishthira counselled Droupadi against acting in anger, because “an angry one cannot see the course of actions accurately. An angry man does not see his tasks or his limits.” He then quoted sage Kashyap’s hymn on forgiveness that I have reproduced in part above. Draupadi however saw Yudhishthira’s words as evidence of his “confusion”. She believed that the time to act was now. Only the “immobile” could “live without acting”.

To get somewhere, one had to at least make a start.

Bheema was less diplomatic than Draupadi. Far from it. He came to the point, and fast. He told Yudhishthira that because “of our obedience to you, it (the kingdom) was stolen in front of our eyes…It is because we sought to do what is pleasing to you that we now face this great calamity.” Lest his elder brother take refuge behind “dharma”, Bheema let his opinion be known that a “man who always resorts to dharma follows weak dharma.” Krishna would also have something to say on the topic, but that’s another matter.

Bheema wondered how Yudhishthira had “been born as a kshatriya” given his “gentleness” that was more befitting a “brahmana.” The time for action was here and now. He exhorted Yudhishthira to “mount the chariot” and to “set out instantly” for Gajasahrya. Most crucially, Bheema brought up a very pertinent point of realpolitik—the kings and princes the Pandavas had defeated in battles earlier would all “follow Dhritarashtra” and “would not have pacific feelings towards” the Pandavas.

Yudhishthira had listened for long, patiently, arguing for forbearance. He now confessed that it was indeed his actions that had led to this state of affairs. But what had happened had happened—“when the time has passed, what is the point of censuring me?” On a more practical plane, Yudhishthira wanted to make Bheema aware of ground realities. “Bhurishrava, Shalya, the valorous Jarasandha, Bhishma, Drona, Karna, Drona’s valorous son and Dhritarashtra’s invincible sons with Duryodhana at the forefront—all of them have weapons ready and are prepared to murder.” Not only that, “their treasury is full and they have a large army.”

Yudhishthira harboured no illusions rooted in sentimentality either— “though the conduct of Bhishma, the mighty-armed Drona and the great-souled Kripa is equal, they will certainly be driven by the royal morsels.” Therefore, “without first defeating in battle all these foremost of men and without any allies, you cannot kill Duryodhana.”

To get to the Kauravas, the Pandavas would have to wade through the likes of Bhishma and others. What did the Pandavas have to take this mighty army on with?

The message sank home. Bheemasena “became pensive and alarmed at the truth of these words and did not reply anything.”

What then was the solution? Vyasa, who happened to arrive there, advised that Arjuna would need to “go to the great Indra, Rudra, Varuna, the lord of riches and Dharmaraja.”

The course of action was clear. Wronged though the Pandavas were, brave though they were, they would stand no chance against the mighty Kaurava army without first arming themselves with divine weapons. To that end, it was not Yudhishthira, not Bheemasena, but Arjuna who would have to go on the pursuit of these celestial weapons.

So, was Yudhishthira a forgiving man? We know that, at least in this case, his forgiving attitude was the result of some rational thinking and cold calculations. But we don’t know for sure. Once the war began, Yudhishthira was much less forgiving. In an earlier article, I had written about his rage at his brother’s failure to kill Karna. There is one more incident, but perhaps in another post.